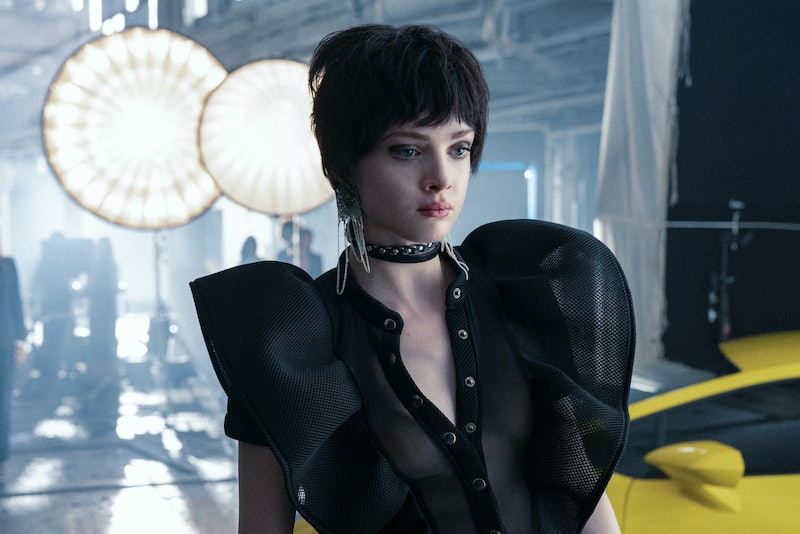 In Mark Millar’s Jupiter’s Legacy comics, Chloe Sampson is the key to unlocking the story. Portrayed by Elena Kampouris in the Netflix adaptation, Chloe is one of two children born to the superhero duo The Utopian (Josh Duhamel) and Lady Liberty (Leslie Bibb). Despite having a sonic scream, telekinesis, and nigh invulnerability like her parents, Chloe is a shallow celebrity who refuses to fight and is often inebriated and missing in action. Like many of the second-generation superheroes in the story, Chloe feels like she can never live up to the altruistic ideals that her parents created when they first flew onto the scene in 1932. She’s content to drown her sorrows in substances, until a devastating tragedy forces her to grow up fast.

“There’s so much to unpack [with Chloe] because, on one end, she’s unfiltered, quite brash, and her powers are tethered to her emotions,” Kampouris explained to Den of Geek. At the start of the story, “she’s in a major place of pain and navigating all of these feelings of guilt and dysfunction with her family dynamic.”

While the plot of Netflix’s adaptation is pretty different from the source material, Chloe’s character appears to be mostly the same. In the comics, Chloe is first introduced at a 2013 charity event for endometriosis, which she’s pretending to care about to please her mom. No one takes her seriously, and for good reason — when her parents and the rest of the superheroes leave to fight the supervillain Blackstar, for example, Chloe refuses to help. “I’m a Buddhist and a vegetarian. I’m not going to hurt someone because they contradict our belief system,” she tells her friends. Her friends mock her while she also complains that her parents are too “beautiful and uncomplicated” and that’s why she’s attracted to bad boys. She then nearly overdoses on an alien substance.

When she wakes up in a hospital, she finds out she’s pregnant from her boyfriend Hutch (Ian Quinlan), the son of the superhero-turned-villain Skyfox. (Hutch himself did not inherit any powers, but his dad gave him a power rod that can transport him anywhere.) As Chloe is telling her mom about the pregnancy and asking to move back in with her parents, her uncle Walter (Ben Daniels), brother Brandon (Andrew Horton), and a large group of superheroes suddenly attack. Unbeknownst to Chloe, all of them agreed that they’re dissatisfied with Utopian and Lady Liberty’s rosy ideals, and that America would be better off with new leadership. The superheroes beat Utopian and Lady Liberty to death, and are about to kill Chloe when Hutch appears to teleport them away.

Years later in 2022, we learn Brandon and Walter’s grand ideas for America have utterly failed to come to fruition, leading to even more poverty and suffering. Chloe and Hutch have gotten their act together and are now hiding out in Australia, working jobs under the radar to provide for their son Jason, a genius with superhuman speed and invulnerability. Despite Chloe warning him about how dangerous her family members are, Jason still enjoys rescuing people on the sly, which eventually alerts Brandon to his existence. When Brandon sends someone to kill Jason, Hutch and Chloe decide it’s finally time to take Brandon and Walter down.

They round up a team of super criminals, who eventually beat Walter, Brandon, and the rest of the bad superheroes. At that point in the story, Chloe is strong enough to kill her brother single-handedly, but in keeping with her parents’ ideals, she takes away his powers instead. In the end, the bad guys are all imprisoned, and the villains turn into the heroes that Brandon and his allies failed to be.

The show may be very different from the comics, but Kampouris teased that Chloe’s arc may still be just as heroic as her comic book counterpart’s. “You’ll see the odes to the book and then some new stuff they injected in there,” she told Den of Geek. “I think they did a really great job with capturing the spirit of the story and I’m super excited to see what people think about it.”