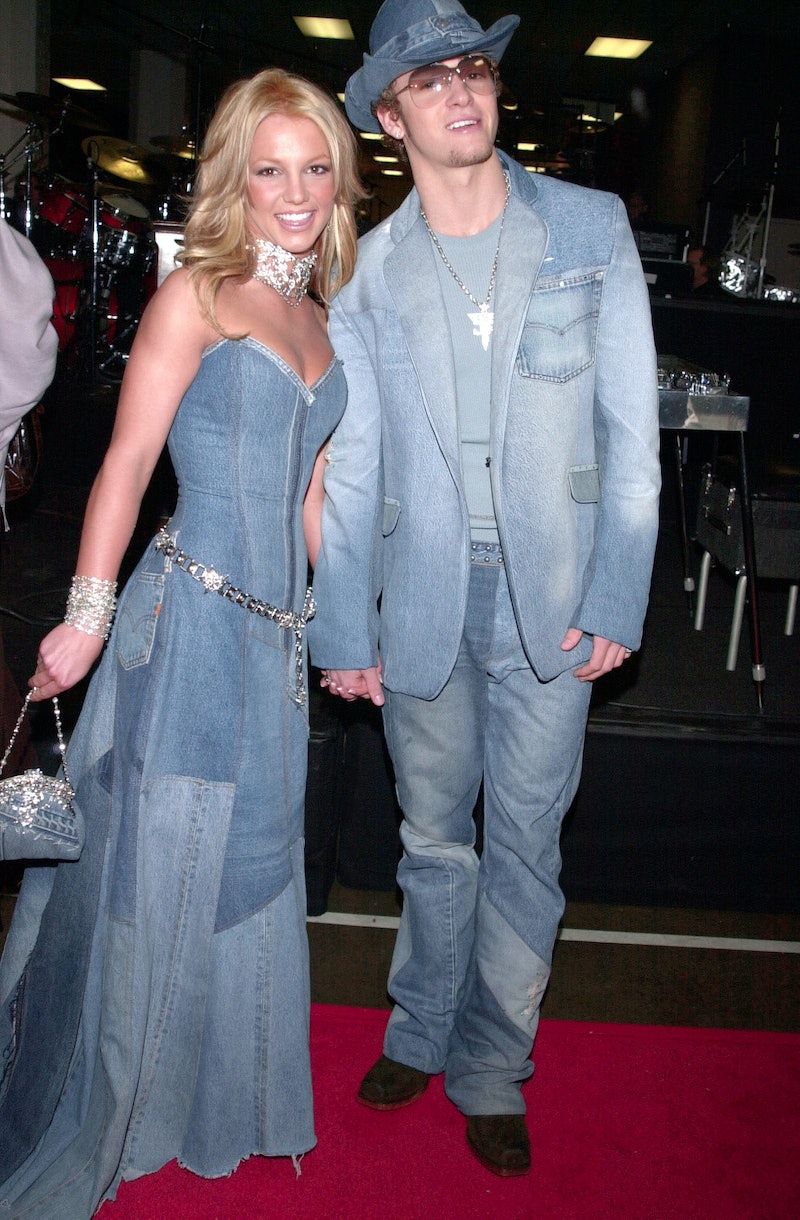 The New York Times documentary Framing Britney Spears not only unpacks the iconic singer's controversial conservatorship, it also details the journey of how she got roped into it in the first place, which includes her infamous relationship with Justin Timberlake. How the *NSYNC alum handled his 2002 breakup with Spears is closely scrutinized in the new doc, leading fans to wonder what Timberlake thinks of Framing Britney Spears. Bustle has reached out to representatives of Timberlake but did not receive an immediate response.

Timberlake has not publicly commented on the documentary since its premiere Feb. 5 on FX and Hulu, even as fans are demanding an explanation. Many viewers have criticized the singer online, saying that he owes Spears an apology for how he handled their public breakup. In a post-split radio interview, the hosts crudely asked Timberlake, "Did you f*ck Britney Spears, yes or no?" Rather than politely decline to answer, he happily responded, "OK, yeah, I did it!"

Most notably, in 2002, Timberlake casted a Spears look-alike in his "Cry Me A River" video and showed the character cheating on him with another man. The clip fed into tabloid reports that Spears was unfaithful during the relationship and led many fans to believe the story, although to this day it has not been proven. “The way that people treated her, to be very high school about it, was like she was the school slut and he was the quarterback,” NYT critic at large Wesley Morris said in the film.

In a 2003 interview with Diane Sawyer shown in the doc, Spears was asked questions that assumed she was in the wrong for the breakup, with Sawyer commenting, "You broke his heart, you did something that caused him so much pain, so much suffering. What did you do?" In response, Spears diplomatically said there were two sides to every story. "I think everyone has a side of their story to make them feel a certain way," she said. "I’m not technically saying he’s wrong, but I’m not technically saying he’s right either." Spears also told Sawyer that she felt "exploited" by Timberlake's remark about sex.

However, despite the early 2000s drama, the former couple appear to be on good terms now. In April 2020, Spears danced to Timberlake's 2018 single "Filthy" in an Instagram video, both praising him and hilariously calling out their split in her caption. “As you can see I’m not really dancing folks… I’m just very bored," she wrote. "PS I know we had one of the world’s biggest breakups 20 years ago… but hey the man is a genius!!! Great song JT!!!!!" Timberlake commented on the post with an approving "😂🙌🏻🙌🏻🙌🏻." No matter where this journey goes, at least we'll always have the matching denim outfits.

More like this
Britney Spears Shared The Real Reason She Shut Down Her Instagram Account
By Brad Witter
Twitter Is Having A Meltdown Over Buying Beyoncé Renaissance Tour Tickets
By Jake Viswanath
The Beyhive Is Mad At Harry Styles After Beyoncé’s Album Of The Year Snub
By Jake Viswanath
Beyoncé Has Officially Won The Most Grammys Ever & Twitter Is Losing It
By Jake Viswanath
Get Even More From Bustle — Sign Up For The Newsletter
From hair trends to relationship advice, our daily newsletter has everything you need to sound like a person who’s on TikTok, even if you aren’t.