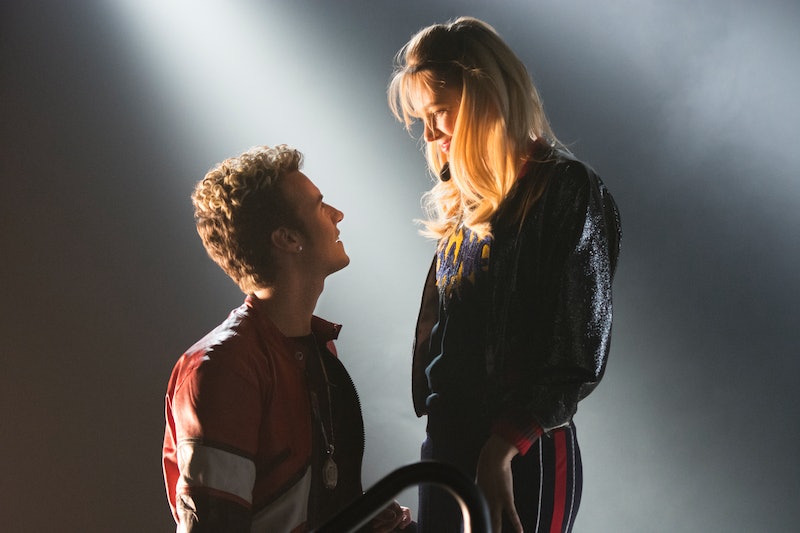 Between all the '90s nostalgia and trips down pop star memory lane, Britney Ever After has turned out to be one heck of an unofficial Lifetime biopic. One of the most interesting plot points that Britney Ever After touched on was why Britney Spears and Justin Timberlake broke up. The saga of Timberlake and Spears is one of the biggest in pop music, with their lives and careers deeply enmeshed in one another's during their formative years.

Spears and Timberlake were an iconic celebrity couple. The matching denim formalwear? Amazing. The effortless charm they seemed to ooze when they gave interviews or appeared in photos together? Perfection. In real life, Timberlake and Spears were serious #CoupleGoals; Britney Ever After definitely replicated the intensity of their young love with great aplomb. But when it came to shedding some light on what actually broke up Spears and Timberlake, the Lifetime movie may have stumbled a little bit.

In Britney Ever After, Justin and Britney break up when Justin begins to get jealous of Britney's closeness with her choreographer. That, in combination with Britney's quick rise to fame seemed to throw off Justin and push him further away from Britney. Shortly after a fight in the dressing room over a piece of fan mail, Justin had had enough.

But is that actually what happened? Well, as the movie didn't have Spears' input, it's unlikely it captured her breakup in perfect detail. At the end of the movie, the network aired this disclaimer: "Although based on a true story, some characters are fictionalized composites, and some events have been compressed, reorganized, or fictionalized for purposes of dramatization. Bustle reached out to Timberlake and Spears' reps about their thoughts on the film in general and to Lifetime about the film's accuracy but did not hear back. However, after the movie was first announced, reps for Spears told Us Weekly, "Britney Spears will not be contributing in any way, shape, or form to the Lifetime biopic ... nor does it have her blessing."

According to The Daily Mail, back when they first split up, Spears reportedly told the Sun newspaper that she split with Timberlake because they wanted different things in life. "The worst thing is everyone wants to talk to me about it. Everywhere I go people are asking how I am," she told the Sun at the time. Neither of them really ever went into detail about why their relationship ended, with Timberlake expertly dodging the question in an interview with Barbara Walters shortly after the split:

"I remember when we decided we were going to go our separate ways, we sat down and I said to her, 'If there's ever a moment where you ever need me, you can rest assured that I will be there, because I love you as a person and I will always love you.' But I also said, 'Look, no matter what we say at this point people are going to speculate things, and I could really get myself in horrible position if I was to say something and somebody misinterpreted, because that happens all the time.' And I promised her that I wouldn't say specifically why we broke up."

Timberlake and Spears have remained somewhat amicable over the years, although they have yet to actually reunite. For now, we'll just have to settle with the fact that the closest thing we'll get to a reunion is the one we got on Britney Ever After.