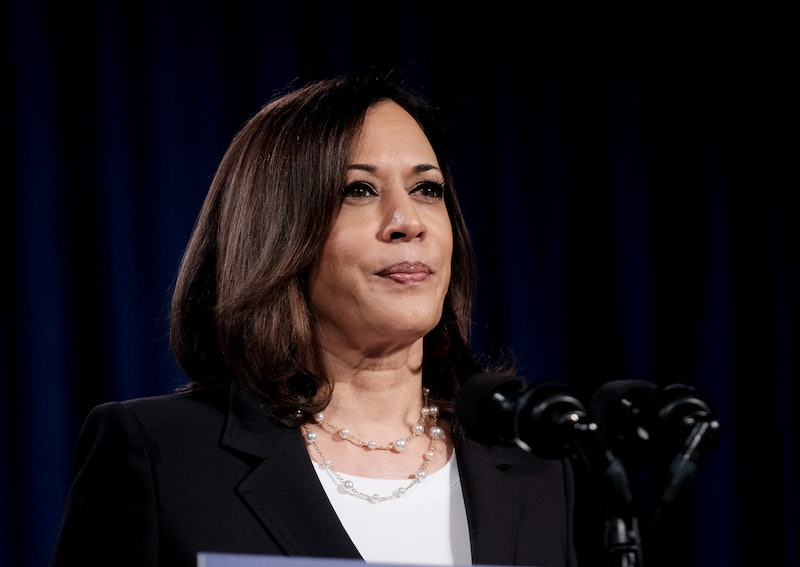 Late on Friday, Aug. 28, Chadwick Boseman's family shared that the actor had died at age 43, after a four year battle with colon cancer. In the wake of his passing, the Black Panther star's fans were quick to notice that his final tweet was devoted to celebrating Democratic presidential nominee Joe Biden choosing Kamala Harris as his running mate. Now, Senator Harris has honored Boseman on Twitter in a series of tweets praising her friend and fellow Howard University alum for his work and dedication to creating a brighter future.

Shared on Aug. 11, Boseman's final tweet featured a photo of him with Harris alongside the caption, "YES @KamalaHarris! #WhenWeAllVote #Vote2020." Throughout his career, the actor made an effort to amplify other Black voices, and it's fitting that his final tweet was dedicated to praising Harris, the first Black woman and first person of Asian descent to be nominated for Vice President. His desire to encourage Americans to vote even as he was facing his own personal battle with cancer wasn't lost on the California senator.

In her first tribute, Harris focused on praising her fellow Howard alum's legacy and sending her condolences to his family. "Heartbroken. My friend and fellow Bison Chadwick Boseman was brilliant, kind, learned, and humble. He left too early but his life made a difference," she wrote in part. Then, in a followup tweet, she shared a portion of his commencement address for Howard University's 2018 graduating class that focused on continuing to fight for justice.

"During his commencement speech at our beloved Howard, my friend Chadwick Boseman said, 'press on with pride and press on with purpose,'" she wrote. "In his name, let’s keep fighting."

In a third tweet, the senator lauded Boseman for taking on roles that painted "a new picture of what’s possible." From the king of Wakanda, T'Challa, to real-life figures ranging from baseball great Jackie Robinson to the first Black Supreme Court Justice Thurgood Marshall, the actor turned in a series of powerful and influential performances in his all too brief career. And as Harris pointed out, he was eager to use his voice to promote change on and off screen.

Harris was far from the only politician to pen a tribute to Boseman. Democratic presidential nominee Joe Biden sent his prayers to the actor's family while also writing that the Black Panther actor "inspired generations and showed them they can be anything they want." Former president Barack Obama added that Boseman came to the White House to work with kids while he was filming the Robinson biopic 42. "You could tell right away that he was blessed," he tweeted. "To be young, gifted, and Black; to use that power to give them heroes to look up to; to do it all while in pain – what a use of his years."

Former First Lady Michelle Obama shared her memories of Boseman as well. "Only Chadwick could embody Jackie Robinson, Thurgood Marshall, and T’Challa," she tweeted. He, too, knew what it meant to persevere. To summon real strength. And he belongs right there with them as a hero—for Black kids and for all our kids. There’s no better gift to give our world."

As the tributes from Harris, Biden, and the Obamas so beautifully illustrate, it seems that Boseman's memory will live on both for his groundbreaking film work and for his ability to fight for a better world no matter what he was going through privately.

More like this
Lindsay Lohan & Jonathan Bennett Celebrated Mean Girls Day Very Differently
By Jake Viswanath
What Is Miles Teller’s Net Worth? The 'SNL' Host's Bank Account Is No Joke
By Meg Walters
Alan Rickman's Diary Reveals Why He Considered Leaving 'Harry Potter'
By Darshita Goyal
Lin-Manuel Miranda & Tituss Burgess React To 'Little Mermaid' Casting Backlash
By Radhika Menon
Get Even More From Bustle — Sign Up For The Newsletter