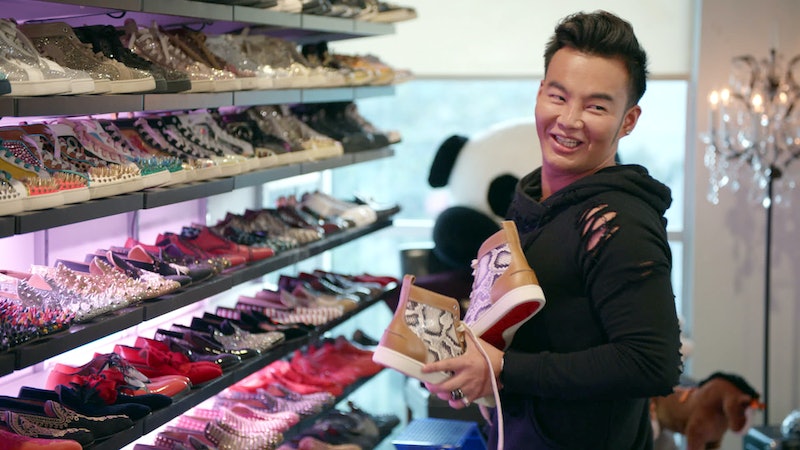 "Just go shopping. That's the best therapy," Kane Lim says in a trailer for Netflix's Bling Empire. The 30-year-old follows his own advice quite frequently, as evidenced by his very flashy Instagram. But that shopping habit — plus the fact that his dad is a Singaporean billionaire — helped establish his wild success in investing. There's a lot to Kane's story, including how he arrived in Los Angeles and on the set of a glitzy reality show. Here's everything to know.

Kane moved from Singapore to Los Angeles nine years ago to attend school, per VoyageLA. And although his father (who likes to keep a low profile, per AsiaOne.com) was extremely wealthy during his childhood, Kane says his parents kept him humble. "Compared to all the wealthy kids in Singapore I was raised very different," he told VoyageLA. His dad "never pampered" him, he said, and even made him ride public transportation to school. His dad only provided him with "the necessities ... such as the best education, food, and travel."

When Kane was 17, his father gave him "a small loan," which he used to start investing in fashion and stocks. He paid it back within two months and earned his first million by the age of 20. Now that he lives in Beverly Hills and is a successful businessman, Kane considers his friends — aka the cast of Bling Empire — to be his family.

Cartier bracelets? He's got 'em. A Burberry trench? You bet. How about the latest Disney x Gucci collab? Of course. But the crowning jewel of Kane's collection has to be his LED-lit wall of shoes, which is valued at $300,000, according to Women's Wear Daily.

On Instagram, Kane has a little over 142,000 followers, and most of them appreciate designer fashion as much as he does. "I have to credit the iconic Rihanna who followed me one day, and because of her I vividly remember how my phone died from the amounts of notifications I had," he told VoyageLA. "I have used my social media presence mainly to connect with individuals who enjoy fashion, but more importantly I have used this platform to raise awareness for charities that I support."

His Instagram bio calls him a philanthropist, and he has numerous pre-pandemic posts of his charity work, including those of his 2019 Christmas spent with a family sponsored by Miracles for Kids, an organization that provides relief for families of children with life-threatening illnesses.

Kane's (Other) Job Is In Real Estate

As part of his investment plans, Kane is delving into real estate development. "Back in Thailand, we have commercial real estate ranging from shopping malls to office buildings," he told VoyageLA. "In Los Angeles, I’m [in] the process of doing some residential deals and commercial ones in the future."

In September, he shared one of those residential properties on Instagram; it's currently pending sale on Zillow with a modest list price of almost $2.7 million. If Kane has accomplished this much by the age of 30, there's no telling where he'll be in another few decades.

More like this
Julia Haart’s Husband Fired Her As CEO Of Elite World Group
By Brad Witter
Watch The Gripping First Trailer For The 'Harry & Meghan' Netflix Doc
By Jake Viswanath
Cole Says He's In Therapy After 'Love Is Blind' & It's Been "Liberating"
By Grace Wehniainen
At 28, Prue Leith Was In A Secret Affair & Sharing Apple Pie With Stoned Neighbors
By Grace Wehniainen
Get Even More From Bustle — Sign Up For The Newsletter