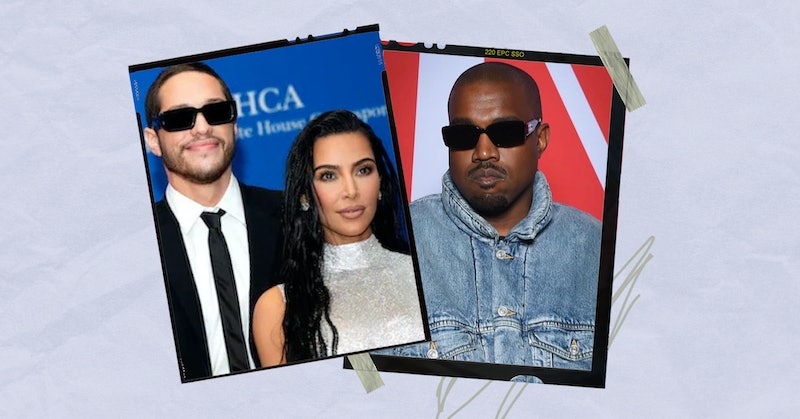 Kim Kardashian and Pete Davidson reportedly split on Aug. 5, and Kanye West wants to have the last word. Kardashian’s ex-husband responded to their breakup with an Instagram post on Aug. 8, sharing a fake New York Times newspaper with the headline, “Skete Davidson Dead at Age 28.” The bottom of the front page also reads, “Kid Cudi meant to play funeral but fearful of bottle throwers,” nodding to his collaborator-turned-foe’s recent performance at Rolling Loud Festival, where he replaced West as a headliner and audience members threw bottles at him, prompting him to leave the stage and end his set early.

West went after Davidson multiple times after he started dating Kardashian, often referring to him by the nickname of “Skete.” In February, the rapper ordered his fans to berate Davidson in a since-deleted Instagram post, writing, “IF YOU SEE SKETE IN REAL LIFE SCREAM AT THE [LOSER] AT THE TOP OF YOUR LUNGS AND SAY KIMYE FOREVER.” He then shared a text from Kardashian, who wrote that “someone will hurt Pete and this will all be your fault,” and told followers that he would “handle the situation” himself.

Of course, their feud only got worse from there. West’s music video for “Eazy,” released in March, features a cartoon version of Davidson being decapitated and buried alive, which the comedian reportedly found “hysterical” but Kardashian wasn’t pleased with. It came to a head later that month when Davidson shared screenshots of text messages in which he and West confront each other. “I’ve decided I’m not gonna let you treat us this way anymore and I’m done being quiet. Grow the f*ck up,” the comedian wrote. “Oh you using profanity, Where are you right now?” West replied, to which Davidson had the perfect comeback. “In bed with your wife,” he wrote back, along with a selfie of him in bed.

Given their history, it comes as no surprise that West finds his ex-wife’s split hilarious. The reality star and the SNL alum reportedly broke up in the first week of August, choosing to remain friends instead. While Kardashian’s representative declined to comment to Bustle, a source told E! that the pair still has “a lot of love and respect for each other” but long distance and their intense schedules “made it really difficult to maintain a relationship.”

While fans wanting a Kimye reconciliation shouldn’t get their hopes up, with the outlet reporting that their divorce is moving ahead as planned, the exes are still “happily co-parenting.” In fact, on the same day her split from Davidson was announced, the Kardashians star shared photos of her promoting West’s new Yeezy sunglasses with their daughter North, signaling that the two are on better terms once again.