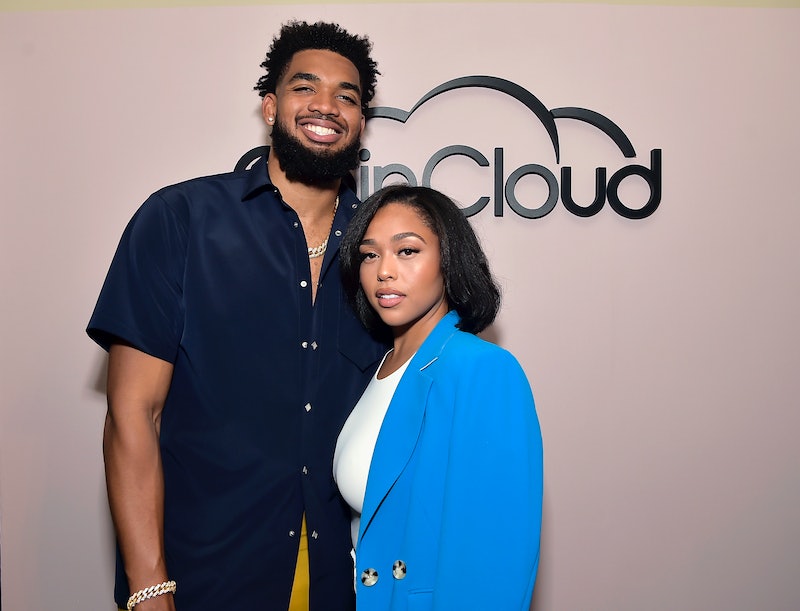 While promoting her new fitness app this week, Jordyn Woods reflected on her own health and exercise journey by sharing a before and after Instagram photo of her progress. Plenty of her followers found her candor to be inspiring, but several others went into social media attack mode, accusing Woods of achieving her results via plastic surgery, rather than putting in the work herself. One person who wasn’t here for the hate? Her NBA star boyfriend Karl-Anthony Towns, who defended his girlfriend of more than a year in a nine-part Twitter thread on Thursday, Sept. 9.

“Are we saying that women can’t work hard and transform their bodies??” Towns began his series of tweets, which weren’t addressed to anybody in particular. “I’ve SEEN the hard work and I’ve seen the results and trust me, this is all natural. Since she was 10 years old, people been calling this woman vile things because of her weight and instead of letting the Internet run her life, she went out the put the damn work in and changed her whole life. FITNESS SAVED HER LIFE!”

Indeed, Woods recently shared on Twitter that she “found fitness” while “in a deep depression” after her father, John Woods, died from cancer in 2017. “Working out became my therapy and my saving,” she wrote, addressing others who “may be struggling to find their place in the world,” or experiencing their own mental issues. “Working out saved me and I wanted to let everyone know we all start somewhere. You’re beautiful at any weight, shape, or size, but you’re not alone.”

After Towns briefly referenced “the people who have these Twitter fingers that make other people feel bad so they can feel better about themselves,” the Minnesota Timberwolves center shifted focus to Woods, whom he addressed directly in several tweets. “That comparison picture, as I told you before you posted it, is gonna help a lot of people, especially young girls who feel they can never reach the body that you’ve acquired NATURALLY,” he tweeted. “These people feel no one understands what they go through… but you get it.”

Towns — who wrote that he’s proud to call Woods “my Girl, my Queen, my Rock, my everything” — also applauded his girlfriend for staying true to herself, despite her “positivity and love” being met with hate: “This is why you will succeed in life babe, because through all the tough shit and extremely challenging times, you never changed to fit people’s narratives and agendas. You stayed true and ten toes down in everything.”

In summation, the basketball star tweeted that he “could write a book about why this world needs more people like” Woods, and that “the next generation is so lucky” to have her as a role model — in spite of whatever “incredibly false narratives” they’d tried to include her in. “John is smiling down at you every day at the way you handle things and at how you treat people who don’t deserve your kindness,” Towns added, referencing Woods’ late father.

And that’s how you become the MVP of boyfriends.

More like this
Confusion Reigns After Kanye Changes His Instagram Profile Pic To Kris Jenner
By Jake Viswanath
The Try Guys Cheating Scandal, Explained
By Grace Wehniainen
Kourtney Kardashian Claps Back At Pregnancy Speculation On Instagram
By Jake Viswanath
Jack Grealish’s Reaction To England’s New Kit Is The Most British Thing You’ll See Today
By Darshita Goyal
Get Even More From Bustle — Sign Up For The Newsletter