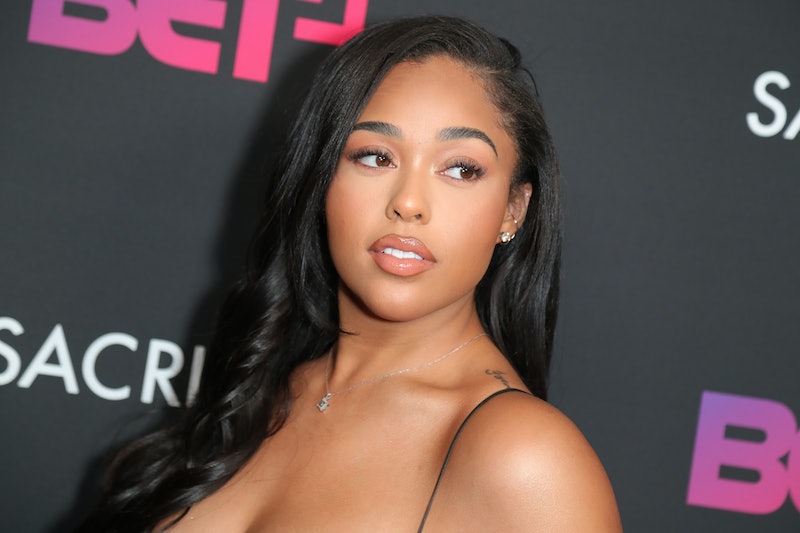 Jordyn Woods celebrated her 23rd birthday on Wednesday, Sept. 23, but it's not how she marked the occasion that made her trend on Twitter — it's who she celebrated with. And no, it wasn't her former BFF Kylie Jenner. Eagle-eyed fans spotted both several lavish gifts and a familiar rumored love interest on her Instagram Story, which made them convinced Jordyn Woods is dating Karl-Anthony Towns. And according to Woods' recent Instagram activity, it's definitely true.

Toward the beginning of their relationship, Woods was openly cuddly with the NBA player on Instagram and they've been spotted out and about looking like more than friends, too. According to TMZ, the pair has been spotted hanging out numerous times around Los Angeles. Woods previously put Towns in the friend zone, commenting on Instagram in August that he "is like a brother to me," but based on the way he was touching her in his Instagram birthday message — captioned "Happy BDAY Queen," complete with the crown emoji — they seem to have pushed past that.

Woods later reposted his Instagram message, adding a heart emoji. She also reposted a playful snapshot of the couple posing in front of a car, shared by her younger sister Jodie Woods with the caption "parents," and a video of Towns sporting a "23" jersey similar to the one he gave Woods, but with her name written on the back. If that's not love and dedication, then what is?

Woods also showed off the lavish gifts she received for her birthday, including two Hermès Birkin bags (aka one of the most elusive and expensive designer bags out there) and a crystal-covered Chanel clutch. She also got an autographed jersey from Michael Jordan, whose jersey number just happens to be "23," which aligns with Jordan turning 23 on the 23rd. The model tagged Towns in the video, all but confirming that he was responsible for the lavish gifts.

A few days after her birthday, on Sept. 26, Woods posted a photo of her and Towns hugging on the beach and wearing matching swimsuits. She wrote, "I found you, then I found me," making their relationship Instagram official.

It wasn't long until Woods shared another photo with Towns, only this one included the rest of her family, which goes to show things are getting serious between them.

Despite being in the public eye for years thanks to her former association with Jenner and the entire Kardashian family, Woods' dating history is a bit of a mystery. In fact, the most well known part of her romantic life is arguably the scandal that broke her friendship with Jenner. In March 2019, Tristan Thompson reportedly cheated on then-girlfriend and Jenner's sister Khloé Kardashian with Woods at a house party. However, the model insisted that she was never "intimate" with Thompson and repeatedly apologized for what did happen. "On the way out, he did kiss me... no passion, no nothing, it was a kiss on the lips, no tongue kiss, no making out," she said on Red Table Talk. But that's firmly in the past, as Kardashian, Thompson, and Woods have all moved on and are in committed relationships now.

More like this
Who Is Camila Cabello Dating? She's Getting Cozy With Lox Club CEO Austin Kevitch
By Radhika Menon
Who Is Bad Bunny Dating? Gabriela Berlingeri's Vocals Are Featured On His Song "En Casita"
By Radhika Menon
Kim Kardashian & Pete Davidson’s Relationship Timeline From Start To Finish
By Jordyn Tilchen and Bustle Editors
Leona Lewis & Husband Dennis Jauch Welcomed Their First Child
By Darshita Goyal
Get Even More From Bustle — Sign Up For The Newsletter