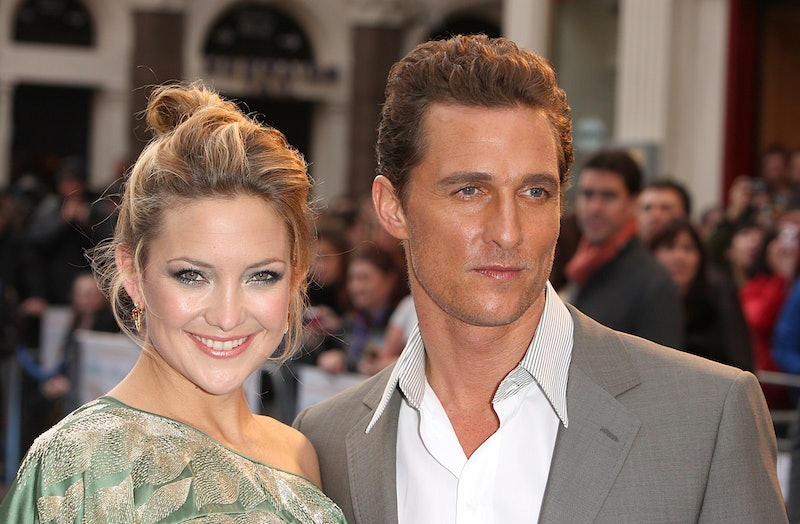 Relationships may come and go, but a love fern lasts forever. Such is the case for How To Lose A Guy In 10 Days stars Kate Hudson and Matthew McConaughey's iconic love fern. The two actors even enjoyed a fun Instagram back and forth about their romantic potted plant, all in honor of the severely under-appreciated holiday "Take Your Houseplant For A Walk" Day.

Hudson took to Instagram on Monday, July 27, to celebrate the holiday, sharing a clip from the 2003 romantic comedy that features the love fern on full display. In the scene, Hudson's character, Andie Anderson, is shown walking away from McConaughey's Benjamin Berry in complete and utter shock over his persistence in keeping their relationship going, despite her efforts to send him running. "Heard it was #TakeYourPlantForAWalkDay So, clearly I thought of one of my favorite co-stars... #TheLoveFern," Hudson captioned the post.

It didn't take long for McConaughey to chime in with his own two cents about his wilting co-star. "Hate to see you leave, but love to watch you go. #ThatDamnFern," the actor wrote in the comments section. It's a fitting and perfect exchange for anyone who is a fan of the film. Ben may not have cared enough to keep said plant alive on-screen ("YOU LET IT DIE!"), but clearly his off-screen counterpart holds this piece of greenery in high regard even all these years later.

This isn't the only time both actors have paid tribute to their love fern this year. In February, it was McConaughey who posted an image on Instagram of the houseplant with a simple, three-word caption: "that damn fern." Hudson then proceeded to repost the image to her own Instagram account, coming to the plant's defense, writing, “that damn fern…? That damn fern?!?! YOU LET IT DIE!”

It's unclear what it was that precisely prompted McConaughey to honor the love fern on that particular day, though he did post it just a month after the movie celebrated its 17th anniversary in January, which may have had something to do with it.

But honestly, that's not important. What is important is that this love fern is finally getting the proper recognition it deserves. And much like the love that Andie and Ben ended up sharing throughout the course of the film, this plant will continue to grow, both in our hearts and on Instagram.

More like this
'Friends' Star Maggie Wheeler Offers Support To Matthew Perry After Reading His Memoir
By Alyssa Lapid
Mel B Thinks These Celebs Should Play Them In A Spice Girls Movie
By Alyssa Lapid
Man Meets Politics: ‘Boy Meets World’ Star Ben Savage Is Running For Congress
By Jake Viswanath
Britney Spears Shares & Deletes Photos Of Justin Timberlake From 22 Years Ago
By Jake Viswanath
Get Even More From Bustle — Sign Up For The Newsletter
From hair trends to relationship advice, our daily newsletter has everything you need to sound like a person who’s on TikTok, even if you aren’t.