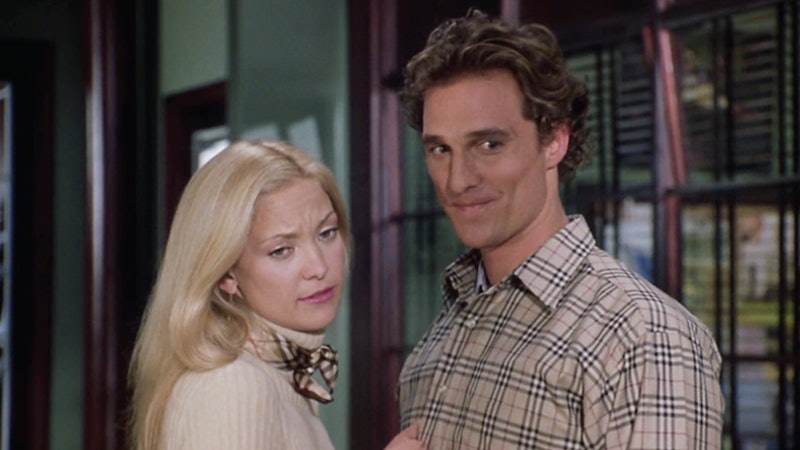 Calling all How to Lose a Guy in 10 Days fanatics: Matthew McConaughey and Kate Hudson are still haunted by the love fern. McConaughey took to Instagram on Friday to share a photo from the 2003 rom-com that follows an advice columnist, Andie Anderson (Kate Hudson), and an advertising executive, Benjamin Berry (McConaughey), who fall in love after they both unwittingly wage conflicting bets with friends and colleagues that result in messy dating shenanigans: Andie must get a man to dump her in 10 days for an article, while Benjamin must get a woman to fall in love with him in 10 days to prove his romantic prowess.

In the film, Benjamin is gifted the love fern from Andie that he inevitably kills. The two get in a heated exchange outside of an elevator. The Interstellar actor shared a photo from the scene in question and captioned the post, “that damn fern.” His throwback post prompted Hudson to reply with a cry-laugh emoji in the comments’ section. She then reposted the image on her Instagram and wrote, “that damn fern…? That damn fern?!?! YOU LET IT DIE!” Their homages to the classic rom-com comes a month after the film celebrated its 17th anniversary in January.

The film’s anniversary comes a few months after Quibi announced a How to Lose a Guy in 10 Days reboot back in August. While the series will follow a similar narrative, Quibi’s revival will come in a new format that consists of bite-sized, 10-minute episodes. Per TVLine, the Quibi series will follow “a glib young online columnist and an oversexed advertising executive who both need to prove, once and for all, they're capable of being monogamous.” The synopsis continues, “They soon discover, however, keeping a relationship is harder than Andie Anderson made it look!"

While Hudson and McConaughey aren’t attached to the revival, Hudson was heavily involved in the original film. On the film’s 15th anniversary in 2018, Hudson reflected on the rom-com’s success and told Entertainment Tonight, “I was very involved in [the development stages], so, to watch a movie I was so involved in from the very beginning and see the success was awesome."

McConaughey echoed the same sentiments when he ranked the film as his favorite rom-com on Watch What Happens Live last month. “That film has been my greatest mailbox money of any film,” he told Andy Cohen. “It is always on and there’s always this great little check that shows up in the mail from How to Lose a Guy in 10 Days. I did that however many years ago!”

More like this
Lindsay Lohan Just Recalled A Hilarious 'Parent Trap' Story
By Sam Ramsden
Then Vs. Now Photos Of The 'Enchanted' Cast In 2007 & The Sequel's Stars In 2022
By Marina Watts
See 'Twilight' Stars Together Again For A Sweet Cullen "Family Reunion"
By Stephanie Topacio Long
24 Photos Of The 'Love Actually' Cast Then & Now
By Grace Wehniainen
Get Even More From Bustle — Sign Up For The Newsletter