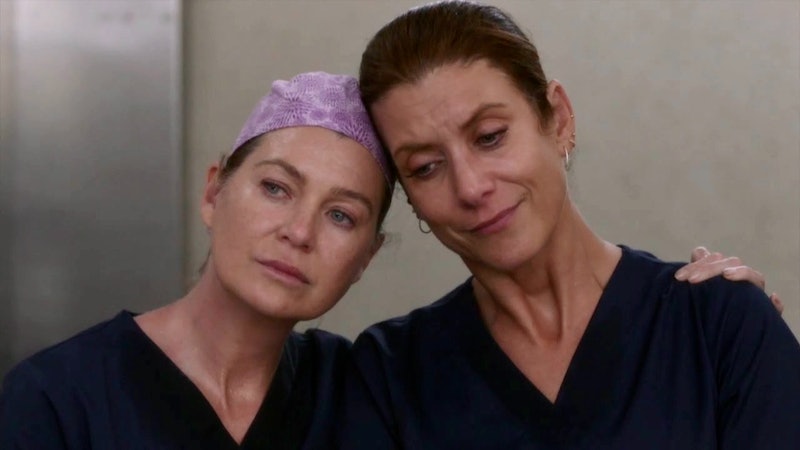 Spoilers ahead for Grey’s Anatomy Season 18, Episode 3. Addison’s return to Grey’s Anatomy began with laughter and ended with tears. There was plenty of nostalgia too, including an emotional scene between Meredith and Addison that took place — where else — in an elevator.

After Grey Sloan’s ventilation system broke down in the middle of a groundbreaking uterine transplant, Addison enlisted the help of Meredith, aka the woman she confronted her for “screwing” her husband in Grey’s Season 1. Following the successful surgery, both women stepped onto the hospital elevator and shared a laugh. But after the doors closed, tough-as-nails Addison immediately broke into tears, admitting the real reason she returned to Seattle.

“I thought coming back here, to Seattle, to Grey Sloan, that he’d be here, that I would be able to feel that he was still here in the city he loved with the people he loved, but he isn’t,” she tearfully told Meredith of Derek. “And it’s real. He’s not here.”

Meredith disagreed. “Addison, he is here,” she replied. “And he’s in his children, and they are very real. And I would love for you to come and meet them.”

Meredith soon made good on her invitation, and Addison joined her and Amelia (who worked for Addison in the Private Practice spinoff of Grey’s that aired from 2007 to 2013) in their home to have ice cream with Zola, Bailey, and Ellis. After Bailey asked if she was “daddy’s friend,” fans on Twitter were crying right along with her. “I was, yes. I’m Addison,” she replied, adding, “but he... he called me Addie.”

Although Ellis did not appear in the episode (she was upstairs “in a mood” — something Meredith joked she got from her), it seemed to be love at first sight for Addison and the other two kids, as they held hands and joked around while enjoying their ice cream together. “You guys, guess what? I’m falling more in love with you every second. Every stinkin’ second,” she told Zola and Bailey.

Star Kate Walsh, who plays Addison, was in her feelings offscreen too. “Well excuse me while I go shed a few tears…” she tweeted after the episode aired. “Wow! Thank you all for making this night so special! Feels like I never left. Hope you all loved the episode as much as I did.”

If Addison’s return to Grey’s left you wanting more, there’s some good news: She’ll be back again in the Oct. 21 episode.

More like this
The First Trailer For 'That '90s Show' Includes So Many Nods To The Original Series
By Jack Irvin, Alyssa Lapid and Grace Wehniainen
Patrick Dempsey Explained Why Playing McDreamy Was Frustrating
By Grace Wehniainen
Ellen Pompeo Says Goodbye To 'Grey’s Anatomy' In An Emotional Instagram Post
By Grace Wehniainen
'Neighbours' Is Officially Coming Back & Fans Are Going *Wild*
By Sam Ramsden
Get Even More From Bustle — Sign Up For The Newsletter