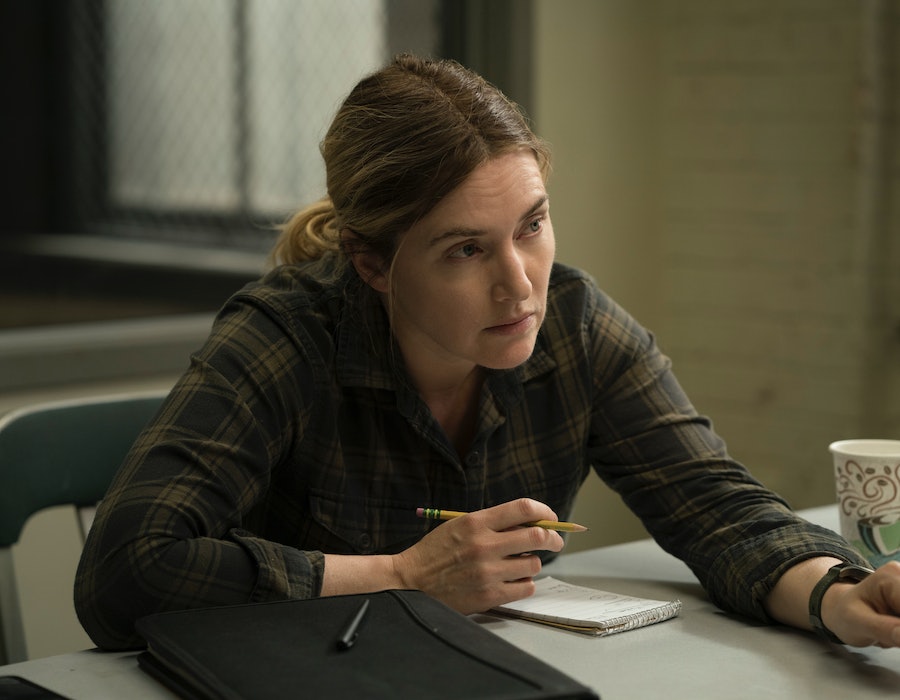 Not since Nicki Minaj rhymed “candy store” with “toddler” (Your Love, 2010) have Americans been so perplexed by what a person could do with vowels. As Mare Sheehan, the harried lady detective on HBO’s Mare of Easttown, Kate Winslet has demonstrated how the letter ‘O’ can be stretched and slanted, half-swallowed and spit back out. In her Delaware County accent, “home” should probably have at least one W in it. The accent has ignited Twitter ado, hot takes, and spawned an SNL skit with Kate McKinnon playing Kate Winslet playing a suburban Pennsylvania cop. A friend renamed our chat group dedicated to guessing Erin’s killer after the skit and Mare of Easttown fans, I assure you, you have not lived until you’ve heard Siri mangle “Murdur Durdur.” So Bustle tracked down Susan Hegarty, Winslet’s dialect coach of 25 years, to see exactly what goes into making a person sound like they’re from nearby-but-not-quite Philadelphia.

To start, Hegarty needed examples. Series creator Brad Ingelsby is from the area, and she asked him to send her recordings. “They were just very simple, spontaneous conversations that might be in the car, or they might be his family playing charades with his wife, and her sister, and their kids, and her parents,” she says. Other dialect coaches on the show brought in their own libraries of voices, including recordings they found online and some made in the field. Eventually, Winslet opted to base her accent on a single model — a local woman slightly older than Mare — with a beautiful, resonant voice, says Hegarty. “She didn't have a small, pinched vocal fry kind of voice.”

From there, Hegarty broke apart Delco the way your middle school teacher diagrammed sentences. Every spoken English language accent is made up of vowels and diphthongs and consonants. It has rhythms and melodies and stress patterns. Take, for example, the letter ‘O’ in Delco — the vowel that set chins wagging after the Mare of Easttown premiere. “It's not an Oh sound and it's not an Ou sound. It's an O sound, and technically speaking, it has a very different sound from British speech, but it is close to British speech.” For both British speech and Delco, Hagerty explains, you open your mouth and start making a noise, and then you round your lips. And that’s just what goes into recreating a single letter of the alphabet.

Now, normally, Susan Hegarty doesn’t read reviews. In general, she says, people love to criticize and pick at accents. But she made an exception for Mare of Easttown, curious how people would react to an accent they haven’t really heard attempted on TV before. “Some reviewer said, ‘Oh, well, [Winslet] slips in and out of the accent. You can hear her sounding British.’” Hegarty was rightfully indignant. “I can promise you that she never sounded British. And so I am convinced that that guy just didn't know that that's an O sound that they have in Philadelphia.”

Mare of Easttown isn’t the first piece of popular entertainment to change our collective idea of what a region sounds like. Stephen King wrote Jud Crandall’s Down East accent into the dialogue of Pet Sematary phonetically. In Cold Mountain, Renee Zellweger moved beyond Southern stereotypes to create something distinct to western North Carolina. Mare of Easttown didn’t invent the southern PA patois; actors just haven’t been attempting it, just like no one had really bothered to do a Great Lakes accent before Fargo. (“Of course, it's a Minnesota accent,” Hegarty points out, not North Dakota.)

As for the SNL skit, Hegarty wasn’t offended. On the contrary, she thought it was hilarious; she was impressed by the ambition of the accent work. “What I thought was pretty great was how much of the accent they did well, because it could have been a very funny skit with bad accents. That could have been the point. But I think Kate McKinnon's quite brilliant,” she says. “Everybody took a stab at it, and they did a great job.”

More like this
Olivia Colman Stars In First-Look Trailer For BBC's 'Great Expectations'
By Sabah Hussain and Sam Ramsden
Alan Carr's 'Changing Ends' Is A Witty Sitcom Based On His Own Life
By Darshita Goyal
Armani Jackson Is Following In His Famous Actor Sister’s Footsteps
By Catharina Cheung
The Banned 'Friends' Ad Shows Monica As You’ve Never Seen Her Before
By Sam Ramsden
Get Even More From Bustle — Sign Up For The Newsletter
From hair trends to relationship advice, our daily newsletter has everything you need to sound like a person who’s on TikTok, even if you aren’t.