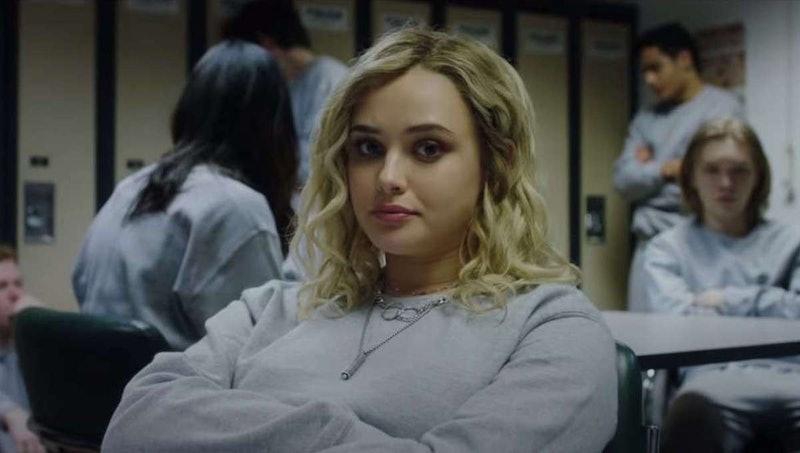 Katherine Langford first made a name for herself starring in the series 13 Reasons Why, Netflix's melancholy look at modern high school life. Now, three years later, she's back exploring the genre. In Spontaneous, Langford plays Mara, a high school student who's sitting in class one day when the person in front of her spontaneously blows up. It's a gory scene, with blood gushing everywhere and small bits of body flying across the room. But it's not a freak occurrence — it's just the beginning.

Two years ago, when the film was shot, Spontaneous was considered a fun, satirical thriller. Which is what drew Langford to the role. "[I love the] unique kind of satire that runs throughout the whole film," she tells Bustle. "But it's also very touching and I think it was the balance between those light moments with some of the more gory elements that I found very entertaining."

But in 2020, with a pandemic spreading throughout the world, Spontaneous is much more prescient than Langford could have ever imagined. "The world has changed very much from when we filmed it. It's the most bizarre feeling," Langford says of the film's eery similarities to the novel coronavirus. "When we shot this, it was complete satire with a little existential undertone. It just felt so far removed. Now obviously it hits a lot closer to home." So much so that Mara and her fellow classmates are put into quarantine in response to the explosions, with politicians promising a cure that never seems to come.

The inexplicable explosion phenomenon is tough on the restless Mara, and she turns to a combination of heavy drinking and heavy denial as a coping mechanism. "Different people react to things differently, and Mara is one of these people who denies it because she doesn't want it to be true," says Langford. "But she's also trying to be really strong. She puts up different facades for others and she also puts up a facade for herself."

But despite Mara's struggle to adapt to her newfound reality, Langford believes Spontaneous offers a message of hope. "I think it's an acknowledgment that not everything is black and white," she says. "Life can sometimes be a mixture of the two of them. What you make of it is up to you. Maybe it doesn't always make sense, but it keeps going."

Spontaneous is available in select theaters now and available on premium video on demand and for digital purchase on October 6.

More like this
How To Stream 'Bros'
By Morgan Leigh Davies
Gabby Petito’s Family Responded To The New Lifetime Movie About Her Final Days
By Grace Wehniainen
13 Photos Of The 'Blonde' Cast Vs. Marilyn Monroe & Other IRL Counterparts
By Marina Watts
The 50 Most Powerful Characters In The Marvel Universe, Ranked
By Johnny Brayson and Nola Pfau
Get Even More From Bustle — Sign Up For The Newsletter