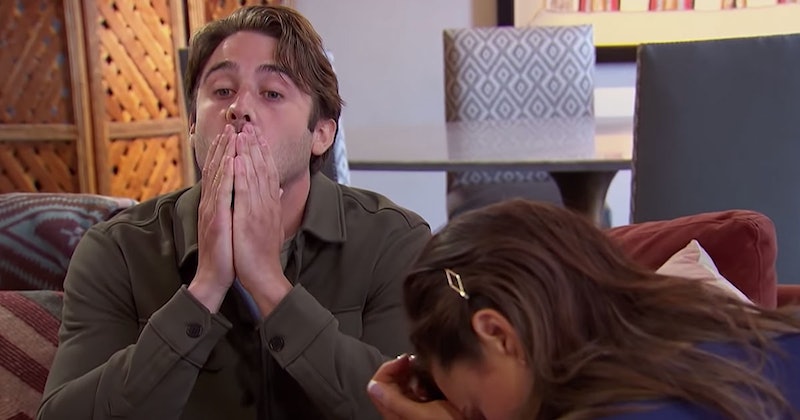 Weeks after Greg Grippo eliminated himself from Katie Thurston’s season of The Bachelorette, the two confronted each other on After the Final Rose. And things got really heated, really fast.

Co-host Tayshia Adams and Kaitlyn Bristowe started the conversation by asking Greg to explain his side of the breakup. “Saying what I said to her on that couch, I haven’t opened up to anyone like that in my entire life. I felt like I was giving her my everything and I just wanted some of it back in that moment,” Greg said of their conversation following his hometown date. The next morning, he went to Katie’s room “hoping for us to get back on the same page,” but said, “there was a clear disconnect, and it was hard for her to completely open up her heart to me.”

Despite how he and Katie left things, Greg confirmed he wouldn’t have done everything differently, sharing that he truly believed everything happened for a reason and that he was grateful for Katie no matter what.

Katie had less of a positive tone and didn’t even hug him when she walked onstage. “I never felt that you actually intended to probably ever get engaged in that journey together,” she said. “You’re saying that I'm not validating you enough but it's like, you got a first impression rose, you got a first one-on-one, a second one-on-one.” Katie went on to share that watching it back, she felt like she was validating Greg every single week, and that for the hometown date to go perfectly until the very end, it seemed like Greg was just looking for an out.

Greg responded that he was confused why Katie would think that. Then Katie went back in, calling him out for speaking down to her and not even saying goodbye. “You said you love me, [but] I don’t think you even know what love is because that was the time I needed you the most and you ran away.” Greg defended his actions, saying that his intentions were to get engaged.

Katie wasn’t buying it. “Using me to get the experience, the exposure, dare I say the acting practice, at my expense,” she said, causing the audience to erupt. “I mean it was pretty good until the end when you kind of f*cked it up and ran away.” She also said he was gaslighting her, though Greg said he was simply acting out of passion.

In the end, they both wished each other well and essentially agreed to disagree, but it seemed like there was definitely still tension.

More like this
10 Photos Of The Wildest Limo Arrivals From 'The Bachelor' Premiere
By Brad Witter
A Guide To All Of Zach Shallcross' 'Bachelor' Filming Locations
By Brad Witter
Zach Swears He Didn’t Look Up Contestants Before The Bachelor Began Filming
By Brad Witter
Bachelor Zach’s “Dream Job” Has Nothing To Do With His Work In The Tech Industry
By Brad Witter
Get Even More From Bustle — Sign Up For The Newsletter
From hair trends to relationship advice, our daily newsletter has everything you need to sound like a person who’s on TikTok, even if you aren’t.