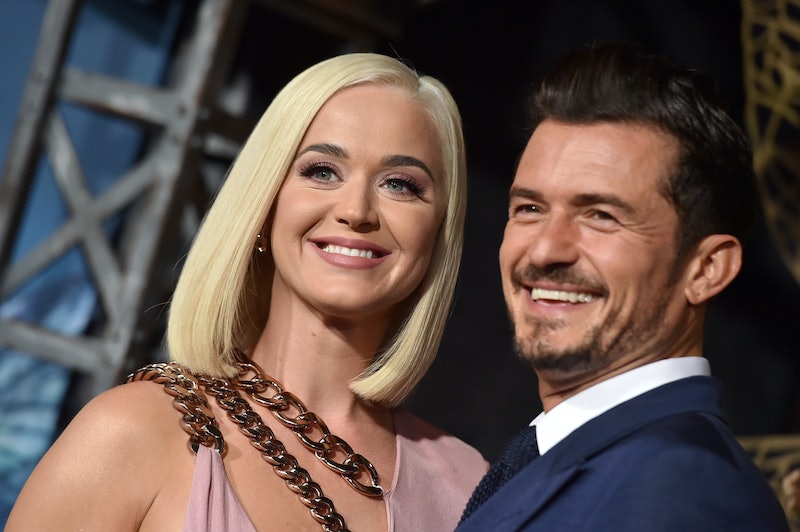 Katy Perry's newborn daughter has a touching connection to one of her most meaningful songs. The singer welcomed her first child — named Daisy Dove Bloom — on August 26, and Katy Perry and Orlando Bloom's baby name might be a nod to her single "Daisies," which she released back in May. While the couple have not yet confirmed the connection between Perry's song and their newborn daughter, the singer did pay homage to baby Daisy by rocking a floral manicure in their first family photo.

The couple shared the news of their new addition with an emotional UNICEF appeal on Instagram, asking followers to consider supporting vulnerable expecting mothers and newborns around the world. "Welcome to the world, Daisy Dove Bloom! We are honoured to introduce Goodwill Ambassadors Katy Perry and Orlando Bloom’s new bundle of joy," UNICEF wrote in a statement on Instgaram, on behalf of the new parents, alongside a photo of them holding hands with their new baby girl.

"We are floating with love and wonder from the safe and healthy arrival of our daughter," Perry and Bloom said in a statement shared by UNICEf, "but we know we're the lucky ones and not everyone can have a birthing experience as peaceful as ours was." Through their appeal, the couple and UNICEF are hoping to "provide expecting mothers with a midwifery kit, soap, and clean water, ready-to-use therapeutic food, and PPE" in order to avoid deaths from preventable causes.

Perry released "Daisies" in May, just a few months after announcing she was expecting her first child with Bloom, who is also a father to 9-year-old Flynn from a previous relationship with Miranda Kerr. "They told me I was out there, tried to knock me down / Took those sticks and stones, showed 'em I could build a house / They tell me that I'm crazy, but I'll never let 'em change me / 'Til they cover me in daisies, daisies, daisies," Perry sings in the chorus.

Shortly after its release, the singer wrote about the inspiration behind the song, and teased its significance to her. "Each of us is one in more than seven billion, with our own story of strength and resilience to tell," she wrote on Twitter. "I wrote this song a couple months ago as a call to remain true to the course you’ve set for yourself, regardless of what others may think. Recently, it has taken a new meaning for me, in light of what the whole world is experiencing."

Regardless of whether or not Daisy's name was inspired by her song — or whether the name Daisy inspired the track itself — it's clear that the message of empowerment and triumph is perfect for Perry as she begins motherhood. "I was really terrified of the idea [of motherhood[ two or three years ago," she told People recently. "I'm really glad that I got to check off a lot of boxes personally and professionally before I got to this place. Unconditional love has been a journey for me, and that's going to be amazing."

More like this
The 'Love, Lizzo' Harry Styles Scene Is Just 1 Moment That Made Fans Feel Seen
By Brad Witter
90 Songs To Blast During The Holiday Season To Feel All The Feels
By Brian Anthony Hernandez
Taylor Swift’s Eras Tour Setlist Should Look Like This — With A Blank Space
By Jake Viswanath
Billie Eilish Has An Exciting Relationship Update About Her Boyfriend
By Grace Wehniainen
Get Even More From Bustle — Sign Up For The Newsletter