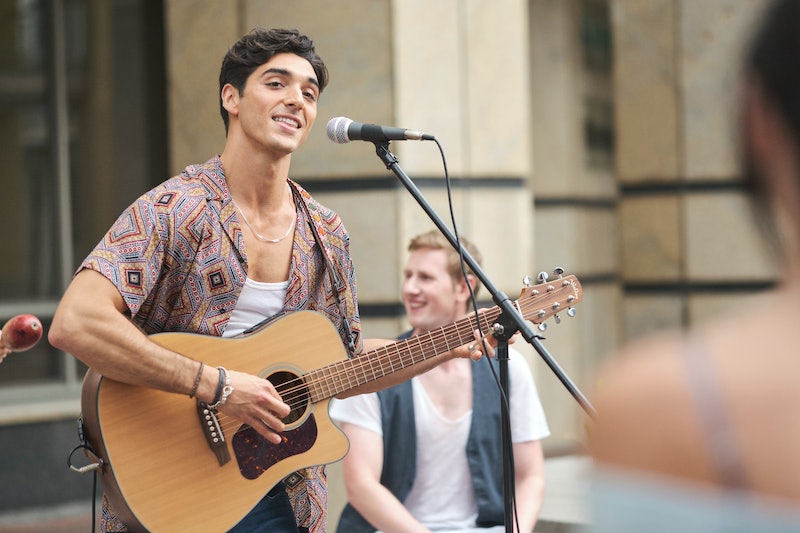 They may have some serious DDR chemistry, but Kissing Booth 2 stars Taylor Zakhar Perez and Joey King aren't dating, they're just friends. Zakhar Perez shut down the rumors in a series of interviews on Wednesday, Aug. 5, after photos of their friendly weekend getaway had fans hoping they had moved their romance off-screen. Though he did admit that his relationship with King is something special.

"I love her. I love her dearly. I'd do anything for her," Zakhar Perez told Entertainment Tonight. "We're not dating." The actor doubled down on the fact that the Kissing Booth 2 stars are just friends in an interview with Access, saying, "I know, we went away this weekend for some friends' birthdays, and her birthday, and everyone kinda freaked about it. I will say that we are not dating."

Rumors that the actors were dating spread over the weekend after Zakhar Perez shared photos from their weekend trip on Instagram. One particular photo, of King and Zakhar Perez enjoying a close swim in a waterfall, had fans buzzing. That, plus the fact that they had celebrated KB2's Netflix premiere together, seemingly just the two of them. But alas, despite their closeness, it seems that, just like Elle and Lee in KB2, these two really are just friends.

And their friendship has been helping them get through quarantine; "We're kind of each other's accountability partners during quarantine," he told Access. According to the actor, they live really close to each other, creating the perfect environment for safe quarantine hangouts. "We kinda just needed someone to trust during that time [of quarantine], like, 'OK, I know you're not going out. I know who you're seeing.' So we just became really close," he explained to ET. Everyone has their own quarantine pod, his just happens to include his co-star.

Fans still hoping for a Zakhar Perez and King romance might still be in luck — sort of. They may not be dating IRL, but their Kissing Booth 2 characters could develop a romance in the upcoming third film in the series. Kissing Booth 3 is set to premiere in 2021, and it's already been confirmed that Zakhar Perez's Marco will be making a comeback and, if the ending of KB2 is any indication, a play for Elle's heart.

More like this
Who Is "Daddy" Pedro Pascal Dating? People Are Thirsting Over The 'Last Of Us' Star
By Alyssa Lapid
'The Queen’s Gambit' Season 2 Tweet Wasn’t From Anya Taylor-Joy
By Mary Kate McGrath, Jack Irvin and Grace Wehniainen
Netflix Shut Down 'Bridgerton' S3 Rumours About A “Very Dark” Storyline
By Bustle
Everything To Know About 'And Just Like That...' Season 2
By Jack Irvin and Grace Wehniainen
Get Even More From Bustle — Sign Up For The Newsletter
From hair trends to relationship advice, our daily newsletter has everything you need to sound like a person who’s on TikTok, even if you aren’t.