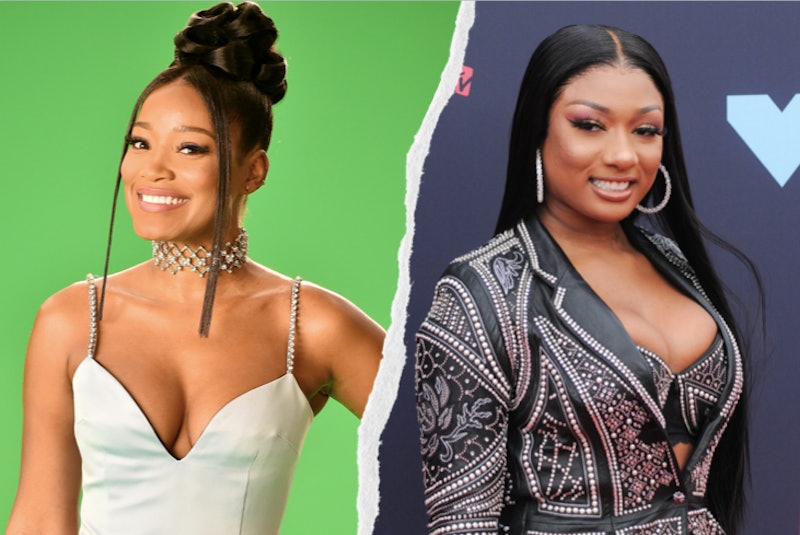 Following the release of Tory Lanez’s new album, Keke Palmer defended Megan Thee Stallion against the rapper’s “gaslighting.” Lanez, real name Daystar Peterson, released an album entitled Daystar on Thursday full of lyrics refuting Megan's claim that he shot her in the foot after an altercation in July. Bustle reached out to Megan’s reps for comment about the Lanez's new album, but did not receive an immediate response.

In the track “Money Over Fallouts” — which features the lyric "Megan people tryna frame me for a shootin'" — Lanez denied harming the "WAP" rapper and questioned her claim that she was shot in the foot, despite her previously sharing photographic evidence of her injuries. "Gotta see a couple questions: how the f*ck you get shot in your foot, don't hit no bones or tendons?," he later raps on the track.

This did not sit well with Palmer, who took to Instagram to support Meg early on Friday. “I don’t wanna talk about it or put myself into nothing but I just want to support Megan,” Palmer began her video. “Because imagine if somebody shot you, and they made an album gaslighting you, [an album] that the world thought, sonically, sounded good.” She continued, “We all have stuff that happens in our personal life that no one knows about, but imagine if something that upsetting was done to you and then put into an album, and you had to see people online talking about if it was good or if it wasn't and constantly bring it up, reminding you what happened again and again and again.”

In her caption, Palmer called Lanez's album "insensitive," "narcissistic," and "toxic," accusing him of “exploit[ing] the details of your relationship with someone in an attempt to excuse your own behavior and gain popularity." She also noted that she “[knows] how it can feel when people don’t believe you," and called Lanez out for saying he cares about Megan, but then doubting her version of events. "How do they care for you when they set you up to be called a liar? Let’s acknowledge the discrepancy in that," Palmer said.

The album marks Lanez's first time publicly responding to the allegations against him. In August, one month after she revealed that she was recovering from gunshot wounds, Meg recounted the alleged shooting for the first time during an Instagram Live, publicly accusing him for the first time. "You shot me, and you got your publicist and your people to [talk to] these blogs, lying and sh*t," Meg claimed, speaking to Lanez directly. "Stop lying." She added that she was hesitant to name Lanez as the shooter to authorities due to the protests against racial injustice sparked by police brutality. "You think I’m about to tell the police that us Black people got a gun in the car?" Meg said. "I didn’t tell the police what happened immediately right then because I didn’t want to die."

Lanez was initially arrested in July on suspicion of carrying a concealed weapon, per The LA Times. However, after Stallion's account went live, the paper also reported that LA prosecutors were reviewing the case and considering adding assault charges.