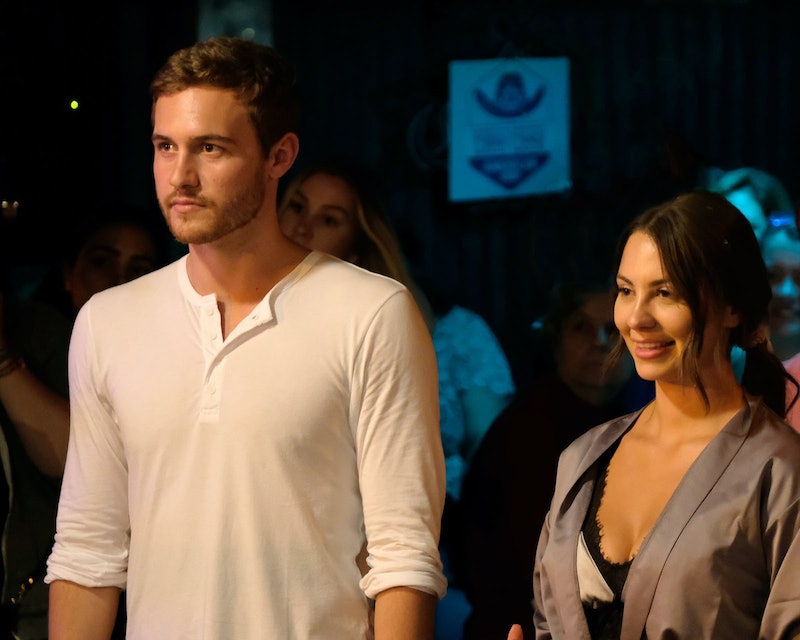 The Bachelor’s Peter Weber and Kelley Flanagan may have split in December of last year, but their breakup drama rages on. On Sunday, May 2, the 29-year-old pilot shared a series of photos on Instagram with actors Victoria Justice and Renata Sanfilippo. “The edge of midnight,” he captioned the post, which features the trio in a variety of poses against a purple and blue backdrop. But the 29-year-old attorney didn’t seem too thrilled about the hangout session, and she even appeared to throw shade at her ex for hanging out with “a good family friend.”

According to Cosmo, when a fan account reposted Weber’s photos, Flanagan reportedly dropped into the comments with a cryptic message. “A good family friend of mine...nice,” she wrote. While it remains unclear what exactly she meant, fans online have their theories. Some loyal Bachelor viewers think that the former Season 24 contestant was shading Weber for hanging out with her friend. However, others pointed out that the former Nickelodeon actor has been open about her longtime friendship with Weber for years.

“So great catching up with you today @pilot_pete!” Justice wrote in a 2019 Instagram post. “For those of you who watch the Bachelorette, I’m sure you know Peter. We’ve been friends since I was 9 back in Florida & our moms are good friends (so let’s not start any crazy rumors ha). We all haven’t seen each other in years & it was so much fun catching up & reminiscing.” But despite their long history as family friends, fans couldn’t help but speculate about whether their relationship blossomed into something more.

“I don’t remember this episode of Victorious,” Instagram user @tanamoody wrote on Weber’s post, referring to the Nickelodeon show that Justice starred in from 2010 to 2013. “Is one of them your new girlfriend?” another one of his followers commented. But perhaps the best comment of all came from @kt_ear, who came through with a hilarious reference to Weber’s overnight date on Hannah Brown’s season of The Bachelorette. “Where’s the windmill when you need it?” they wrote.

Flanagan’s reaction to the photos is just the latest in the pair’s breakup saga. Last month, for example, Weber told E! News that the two were no longer on speaking terms. “Obviously, I wish her well and everything,” the ex-Bachelor said. “I just want her to be happy, more than anything, but ... we’re not in contact anymore. But definitely, I'm always rooting for her and want her to find her happiness.” His comments came just a few weeks after Flanagan got candid about their split on Kaitlyn Bristowe’s Off The Vine podcast.

“If I could put it in the best way, I think that on my end, there was just a lot of non-negotiables in the relationship,” Flanagan told Bristowe at the time. “Actions kind of speak louder than words and it takes a long time to figure that out. If there was something that I saw as disrespectful in the relationship, I would speak on it and I was pretty vocal. Communication is huge in a relationship and there were things where I would essentially be like, ‘Hey, this makes me feel like sh*t. This makes me feel like this way.’”

Flanagan went on to explain that they were “definitely struggling,” despite presenting themselves as a happy couple on the cusp of moving in together. “I essentially asked him if I could have a couple of days to process it myself before we let the entire world know and I wanted to tell my family and my friends and just be able to process it within myself before I have it on blast ... that necessarily wasn’t granted,” she said. Interestingly, Weber tried to fix things shortly after their breakup. “He essentially tried to like get back together and was trying to work on things and I was pretty, pretty hesitant towards all of it,” she continued. “I don’t think I will be in communication with him. It’s a place in my past, I'm focusing on my future wishes.”