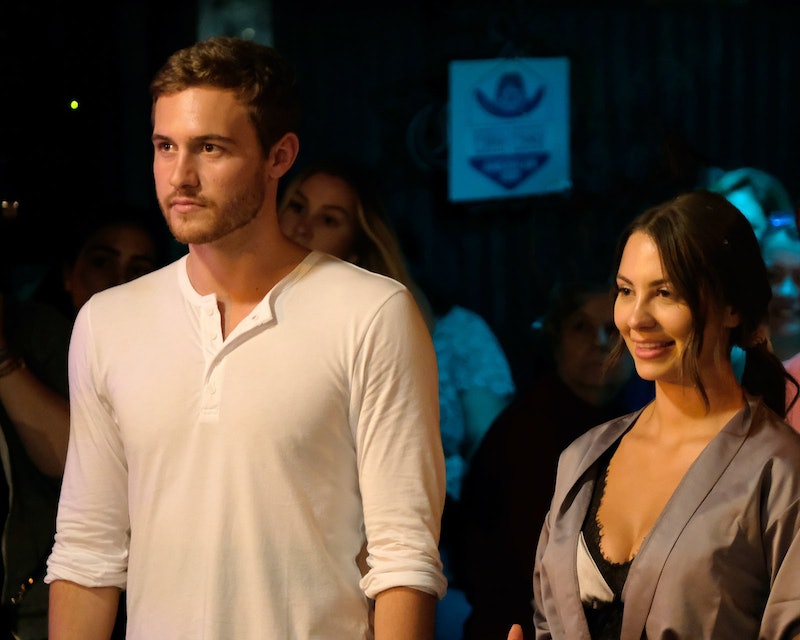 Not two weeks after announcing their joint move to New York City, Peter Weber and Kelley Flanagan broke up. The former Bachelor announced the news in a New Year's Eve Instagram post that reflected on their time as a couple. "Love is a funny thing," he captioned the photo of himself and Flanagan watching the sunset. "It can make you feel on top of the world and it can make you feel a pain you wish didn't exist. I'm here to share that Kelley and I have decided to go our separate ways."

One thing Peter wants to make clear, however, is that his notoriously involved mother Barb had absolutely nothing to do with their split. In fact, he reportedly told Entertainment Tonight that his mom simply told them to do whatever would make them happy. "Kelley and I broke up two weeks ago," Peter said. "I flew to Chicago and was finished with the relationship, then my mom really encouraged us to be in the relationship if we wanted to be and to not give up."

Peter went on to explain that things didn't work out between him and Kelley because they're simply at two very different points in their lives. "Kelley and I operate on two different frequencies, and one isn't better or worse than the other," he told the outlet. "We're just two different people, and those differences surfaced after eight months of dating. But I loved her like crazy, and my mom really cared about her."

The former lead's most recent comments seem to be in line with what he said in his original post announcing their breakup. "While our relationship was filled with countless beautiful memories, our relationship simply didn't work out in the end," he wrote. Regardless, the pilot added that he will "always have a special love for" Flanagan and wished her the best. "These moments in life always hurt, but in my opinion that shows you it was worth the time you spent together," he wrote. "Thank you Kelley."

Barb even weighed in on the split in the comments of Peter's post, wishing the exes the best of luck. "Love can be fickle and it is not for the timid," she wrote. "Those who have experienced it know this all too well. But it is better to have loved and lost, than never to have loved at all. Our hearts ache for you two. Kelley will always have a piece of our hearts and we wish her only the best. Mom and Dad."

On Jan. 3, Kelley shared a message of her own confirming that she and Peter are in "two different stages" of their lives. "I know a lot of you have already heard the news, but I wanted to take some time to process it for myself before sharing," she began in an Instagram caption. "It saddens me to say this but Peter and I have decided to go our separate ways. Peter and I had some unbelievable times together and they will definitely be missed."

After explaining that they saw their "future paths differently," Kelley said that she and Peter will continue to support each other. "I wish Peter the absolute best and want to thank everyone for your continued support as I move on to my next chapter," she wrote. "I'm still hoping to make it to New York one of these days, but for now I just want to focus on my happiness! 2021, I can't wait to see what you have in store!"

The stress of their recent relocation to NYC reportedly led Weber to end things, per E! News. "Peter ultimately was the one who ended it with Kelley, but she 100% agreed that they needed time apart," a source told the outlet. "They had been fighting a lot, and the move was very stressful and put a lot of pressure on them." The source added that they spent the holidays apart — which explains their lack of Christmas photos and Flanagan's absence from Weber's mom Barb's birthday party — and Weber is already back with his family in Los Angeles.

Flanagan, a lawyer from Chicago, took fifth place during Weber's Bachelor journey (Season 24) and they rekindled a romance after his breakups with winner Hannah Ann Sluss and runner-up Madison Prewett. Flanagan was the only contestant to meet Weber before taping, where they felt an instant spark. At the time, their meeting and reconnection felt meant to be, but it looks like fate may have had other plans.

This article was originally published on Jan. 1, 2021