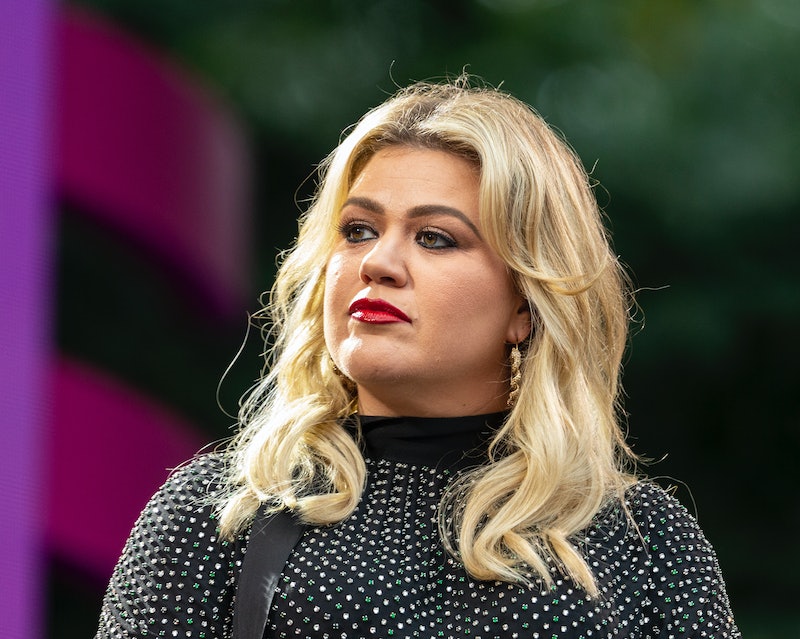 Sometimes the best decision for your family can be the toughest, and no one knows this better than Kelly Clarkson. On the Nov. 30 episode of her talk show, Clarkson opened up about her divorce from husband Brandon Blackstock, explaining that she filed for divorce because she wanted to do what's best for everyone involved.

"As women, we're trained to take it all on and you can deal with it and you're fine, but it's your babies you worry about," she said during an interview with author Glennon Doyle. Doyle responded by referencing her own divorce and explaining that exiting a bad marriage was actually setting a good example for her daughter. "We've all been trained to believe a good mother is a liar," the Untamed author said, as per BuzzFeed. "I didn't leave a marriage in spite of being a good mother. I left because I am a good mother."

Clarkson said that line of thinking truly resonated with her and made her recognize that it was time she and Blackstock legally separated. "That's what I needed to see to make a step in my own life," she shared. "I realized, 'This isn't happiness, and we both deserve better.' That line so hit home for me. I realized, I don't want this for everyone in this scenario right now."

Clarkson filed for divorce from the music manager in June 2020 after seven years of marriage. At the time, she requested joint custody of their children, six-year-old River Rose and four-year-old Remington, and she asked that their prenuptial agreement be enforced. The "Medicine" singer commented on the split in September during the Season 2 premiere of her talk show, admitting that she didn't see it coming. Though she is "usually very open" about her life, Clarkson didn't divulge any more details at the time out of respect for River, Remington, and Blackstock's two kids from a previous relationship. "What I'm dealing with is hard because it involves more than just my heart," she went on. "Divorce is never easy. And we're both from divorced families, so we know the best thing here is to protect our children and their little hearts."

However, circumstances have changed since she initially filed. On Nov. 30, a Los Angeles County judge awarded Clarkson primary physical custody. According to court documents, which were reported by PEOPLE, Blackstock is now seeking $436,000 a month in spousal and child support from Clarkson. The documents also stated "the level of conflict" between the former couple has increased, and they're having a hard time co-parenting with one another "due to issues of trust between them."

More like this
Julia Fox Says She Dated Kanye To “Distract Him” So He’d Leave Kim K Alone
By Jake Viswanath
Olivia Wilde & Harry Styles Are Reportedly "Taking A Break" After Almost 2 Years
By Jake Viswanath and Radhika Menon
Selena Gomez & Blackpink's Post-Show Meetup Left Fans Thirsty For More
By Stephanie Topacio Long
The 'Love, Lizzo' Harry Styles Scene Is Just 1 Moment That Made Fans Feel Seen
By Brad Witter
Get Even More From Bustle — Sign Up For The Newsletter