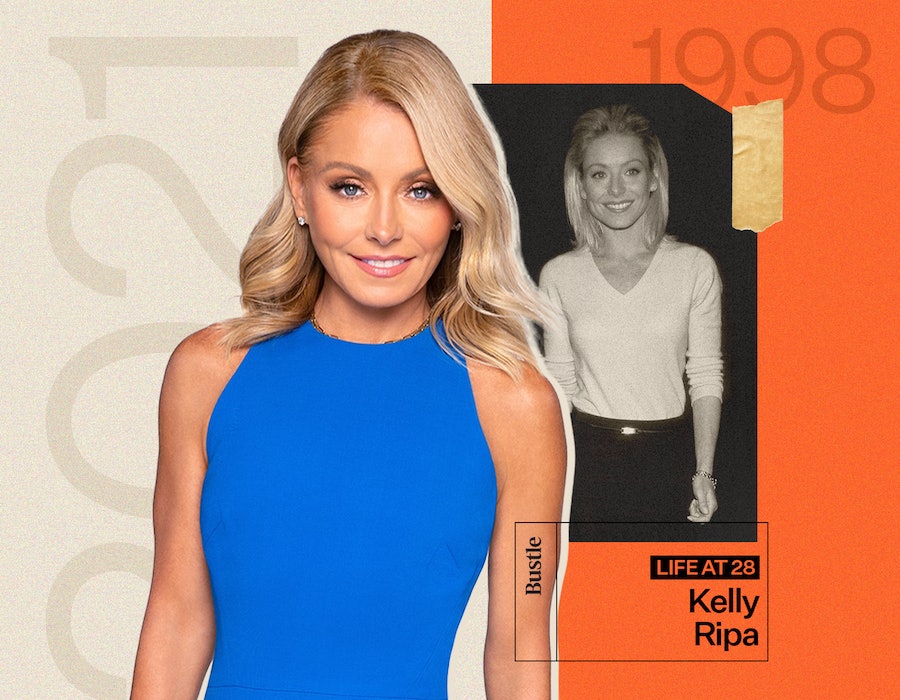 In Bustle’s Q&A series 28, successful women describe exactly what their lives looked like when they were 28 — what they wore, where they worked, what stressed them out most, and what, if anything, they would do differently. This time, Kelly Ripa discusses the year she became a working mother.

“I am the ab-so-lute worst,” Kelly Ripa says. Not just says it, promises it. Dares me to prove her wrong. We’re on the phone, reliving our greatest disasters from a year spent on Zoom, a mode of communication that surely favors an Emmy-winning talk show host.

I accidentally video-called a potential ghostwriting client — a prominent American rabbi — wearing only Crest Whitestrips and a bath towel, I tell her.

“Oh, that’s nothing,” the Live with Kelly and Ryan host says. “That's child's play.” Then, in a move familiar to anyone who’s been watching Live for the past 20 years, her volume dips. If you were at home on the sofa, you might notice yourself leaning a little closer to the TV.

“Amanda, I was on a Harness call,” she tells me, referencing America Ferrera’s social justice nonprofit. They were talking about climate change with — and this is important — the video disabled. Or so Ripa thought. “It was all women. And then in walks my husband wearing nothing but a towel, and thank God he had the towel on. But it was a moment where everybody was finally like, ‘Your camera's on! Your camera's on!’ And then other people were saying, ‘Shh, don't tell her that the camera's on. Maybe he'll totally get undressed!’”

The story is Kelly Ripa in a nutshell: her punchline is zippy, her laugh is fast, and her husband is hunky. Her Zoom gaffes are definitely not worse than yours, but she tells them better. Daytime TV has honed Ripa’s knack for exactly this kind of confessional humor; she’s spent years passing family peccadillos off as scandals, becoming more relatable in the telling rather than less.

But before she became America’s Kelly, she was a soap star from Berlin, New Jersey — a nowhere town halfway between Philadelphia and Atlantic City. By 28, Ripa was newly wed to her co-star Mark Consuelos and living in New York City. Even more recently, she’d had a baby boy named Michael.

Below, Ripa, now 50, talks about becoming the first person in her friendship circle to navigate working motherhood, how the movie Heartburn cured her baby blues, and what she’d do differently on the set of All My Children if she could.

My life changed dramatically, only it's taken me until now to realize how isolating it was. I was working full-time on a soap opera. I don't think people understand the hours that it takes to shoot a one-hour drama each day. We used to routinely work 12 to 14 hour days. That wasn't a long day. That was just your basic day.

Is that what was isolating?

Here's what I noticed the most: Mark's life stayed exactly the same, and my life changed. And it was just something I don't think I really appreciated until right now, just in thinking about it. When you can't make it to brunch or you're not going out to dinner at 10 p.m. anymore, your friends lose interest in asking. Not that they lost interest in me, because I still have the same friends now that I had then, but I stopped getting invited to things because it was like, "Well, Kelly can't come because she's got a kid." And Mark was still going, he was still traveling. He would still go to Italy on the weekend to go watch Formula 1, to give you an example. And it never occurred to me that that would be strange. Nowadays I would say, "Are you out of your mind?"

But back then... I hate to say it, but your perception of how things are changes. As a society, we are certainly in a different space now. I definitely worked a lot, but I was also very present in my child's life. I was very hands on. And part of that is because I had the help of my in-laws and my parents. It does benefit the person in the family to have the first grandchild because we didn't need a nanny. And of course Mark was an incredible father. I am not in any way diminishing his role. I'm just saying that socially his life didn't really change that much.

I remember that year I started crying. I started crying, and I thought, "Oh, I read something about this." There were truly two parenting books then. There was What to Expect When You're Expecting. And then there was this book that my mom gave me that somebody had given her. It was Dr. Spock's parenting handbook.

Neither one of them really told you much about parenting. It was more about what's normal in a baby or in a pregnancy. But somewhere, I read that you may start crying and that may be postpartum depression. This is going to sound like I gave birth in the 1500s, but a lot has changed from 23 years ago to now. I remember thinking, "This is that hormone shift where a person can suffer from postpartum depression." Not to be confused with the very serious postpartum psychosis.

So I put on the movie Heartburn, which is basically Nora Ephron's love story starring Meryl Streep. And I watched the movie and then I listened to the soundtrack over and over again. I cried for about 15 hours and then I felt fine.

Was it important to you to be a young wife and a young mom?

At the time I didn’t think of myself as young, even though it's incredibly young. But I'd been on my own for 10 years at that point. I graduated high school, I moved to New York City, and I started working on a soap right away. By the time I met Mark, he seemed very much like a grownup. He had grown up all over the world, and he was also very mature for his age. It's funny when I look back at pictures of us, we look like our children. And to me, I think of them as glorified newborns.

You met Mark at work, right?

New York is a giant city that somehow seems like a very small town. And then we met in this very small industry, where we had no connections. That in and of itself is very strange, especially when you consider all of our children are somehow going into some facet of show business now. And they go, "Well, it's the family business." And I go, "It didn't used to be." The family business was being a government worker and a bus driver. That used to be the family business, if we're going by what our parents did.

“If you think you're about to get screwed in a work deal, you are.”

At 28, you'd been on All My Children for eight years. Did you have an inkling that acting wasn't going to be the job that defined the next part of your life?

The reason I got into acting was because it was the job that would pay me. I never really fancied being on camera. I still don't. But that's the way I've found has been the easiest way for me to earn a living, which facilitates other things that I like doing. I like creating projects in entertainment, but I don't necessarily want to star in them, if that makes sense.

Now that you've done Live, do you still feel that way about being on a camera?

A hundred percent. I always feel like I'm slipping into a costume when I go out in front of the camera.

Is there an obvious way to you that you've changed since you were 28?

Yeah, I think that I am less tolerant of people's bullshit. And when people lie to me I can suss it out immediately. Whereas I used to give people the benefit of the doubt. I would twist myself into a pretzel to try to justify somebody lying to me, and now I don't tolerate it.

I guess it's bad and it's good. I'm less tolerant, but in a really productive way. I've certainly, as my children got older, I grew to have more patience for them. And then you grow completely impatient with other things, like misogyny, with being underpaid in your workspace.

What do you mean?

It's bothered me ever since. I've earned everything I've had over the course of 30 years of working for the same company, whereas I think that men still don't have an understanding of how hard women have to work to have the opportunity to say this statement that I'm saying right now. And that will no doubt get blowback. People will say, "Oh, but she earns such a good living." Yeah, I do, because I really worked hard for it.

If you could go back and give 28-year-old Kelly advice, what would it be? What do you know now that she needed to know?

Oh my gosh. Your instinct that you're born with, they call it women's intuition, but I think it's human intuition. Listen to it, because it's not lying to you. If something doesn't feel right, it's because it's not right. And if you think you're about to get screwed in a work deal, you are. I think the things that I listened to as a parent and as a wife, I didn't listen to in the workspace. And that's the big difference. I turned off the intuition, and I shouldn't have.

More like this
At 28, Rachel Dratch Was Mingling With Steve Carell & Inhaling Secondhand Smoke
By Samantha Leach
At 28, Emma Thompson Was Already A Star — But Unhappy In Love, Actually
By Olivia-Anne Cleary
At 28, Parker Posey Swing Danced With Liev Schreiber & Ate 4 A.M. Bodega Sandwiches
By Samantha Rollins
Taylor Armstrong Would “Definitely” Return To RHOBH After Her Season 3 Exit
By Brad Witter
Get Even More From Bustle — Sign Up For The Newsletter