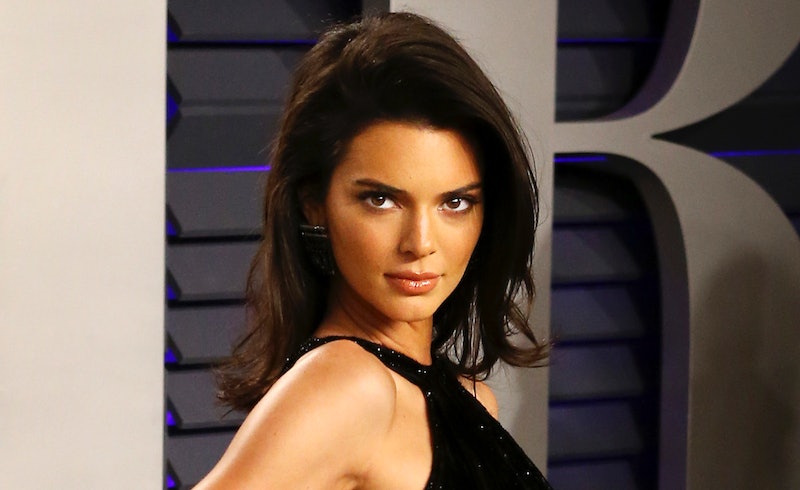 Well, at least now we know this member of the Kardashian-Jenner empire watched the Disney Channel. Kendall Jenner gave a house tour of her newly-redesigned Los Angeles home — and showcased a massive closet that she dubbed the “Hannah Montana room.” In the digital segment published on July 29, Jenner walked viewers through the bedroom converted into a fitting room, so while it isn’t technically a closet, the space does house much of her clothes, shoes, and accessories. There’s also a glam room, a bedroom for glam application with its own entryway, next to the Hannah Montana room. (When you’re a Kardashian-Jenner, an official glam room is a must, obviously.)

“Down here, these are technically two bedrooms, but I needed the space, so I made these into a fitting room, which I also kind of call my Hannah Montana room, and my glam room,” Jenner said in the video. “It’s always kind of a mess. This is where I do all my fittings and kind of throw clothes in here." She added that the Hannah Montana room — accented with white walls lined with framed Daze magazine covers — is where she also does a lot of packing.

Other standout house tour moments include her gold tub and a chromatic wall sculpture from artist James Turrell, a “peaceful and calming” installation that Turrell made for people to “meditate in front of,” according to Jenner. “I’m really proud of what we accomplished here,” she said of the redesign. “This is the first home I’ve done completely, and I think it’s a genuine reflection of who I am and what I like.”

The model revealed on Instagram that it’s “always been a dream” to be featured in Architectural Digest, given her “huge (kinda secret) love for real estate and interior design.” She also explained that the segment was filmed before quarantine, and thanked Kathleen and Tommy Clements and Waldo Fernandez, the designers who worked on the space with her.

Jenner’s space is a major contrast to sister Kim Kardashian and husband Kanye West’s mansion in Los Angeles. The interior of their minimal mansion went viral in February after Kardashian tweeted out photos of its empty rooms. In the replies, followers photoshopped decor and plants into the photos. And, in 2019, Kardashian’s home similarly went viral after she welcomed Vogue into her estate — and readers glimpsed an eccentric bathroom sink without any sort of basin or splash guard attached. The mystery prompted Kardashian to hop on Instagram Story to set the record straight that the sink is, in fact, a working one.

Jenner’s redesigned home, on the other hand, is free of eccentric bathroom sinks and filled with plenty of furniture and decor. And with the Hannah Montana room, she's clearly got the best of both worlds.