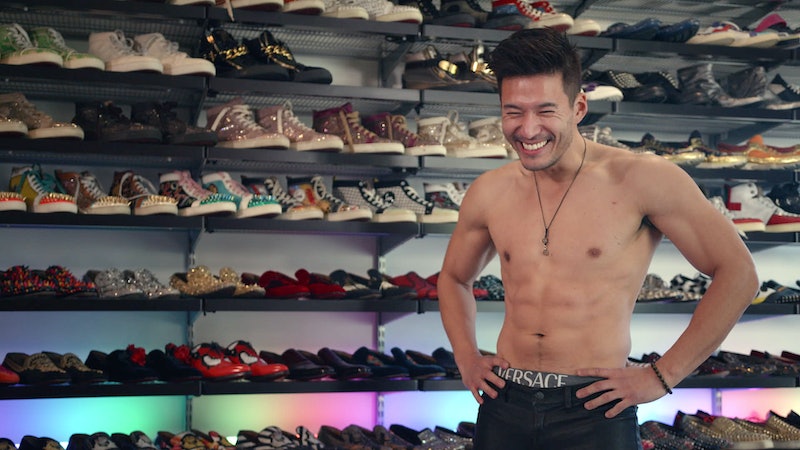 Everyone in the cast of Netflix's Bling Empire is exorbitantly rich except for one: Kevin Kreider, who functions as our gob-smacked portal into his friend group's glamorous world. A down-to-earth model and actor, Kevin was adopted from Korea at a young age and grew up in Philadelphia before moving to L.A. Though he has a loving white mom — who we meet on the show — part of his journey on the reality series involves getting a DNA test and searching for his biological mother. Growing up Asian in a predominantly white area meant he grappled with his identity for a long time. "I literally used to feel like I wasn't Asian enough whenever I was around Asians," Kevin tells Bustle. "And I never felt like I was white enough when I was around white people."

It was because of talks he gave about struggling with his Asian masculinity that fellow Bling Empire castmate Kelly Mi Li reached out to him. "She saw one of my videos and said if you're ever in L.A., let's meet up," Kevin explains. He ended up moving there, where he met Kelly and their costar Kane, who he "hit it off [with] instantly." Kelly then revealed that they were working on Bling Empire and invited him to participate.

"I was like, 'But I'm not rich,'" he says with a laugh. "And they were like, 'It's OK.'" They've all been friends for over a year now, and it's through that group that Kevin has slowly come to accept all the parts of his identity. "I feel like they accept me, and I think it's partially because I accept myself as being Asian more," he says. He added that he knows that sounds strange, but he's learned to embrace the fact that yes, while he was taught "white mannerisms" growing up, "I'm very Asian still."

Here's everything else to know about the Bling Empire star.

Kevin's Job May Be Changing

Kevin is a model in L.A., but he's hoping to do more acting. "I'd love to play leading male roles," he says. "I've written scripts and I've been working on projects with other writers." He says they brainstorm scripts that he could potentially act in, since he doesn't think it makes sense to simply "wait for Hollywood to make it or write it for me."

As for what kinds of roles he's interested in, Kevin praises writers who delve into issues like immigration, or who create films about martial artists. But he says he's interested in stories specifically about "finding my place in the world as an Asian American."

Naturally, there are a lot of modeling shots on Kevin's Instagram, including several shirtless ones. He also shares dating advice and home workout tips.

At the start of Bling Empire, Kevin is single and attempting to woo Kelly, who's in an on-again, off-again relationship with her boyfriend Andrew. "She's rich, she's super successful, and she's hot," Kevin says of what attracted him to her. The two go on a date, and though it doesn't really work out, Kevin says they "always started off as friends." If anything, he adds, filming Bling Empire deepened their relationship. "We still text, and she's very responsive if I need to call her or talk to her about stuff."

Kevin is aware that recent reality shows — like Singapore Social, House of Ho, and now Bling Empire — have been criticized for focusing exclusively on rich Asians. But he points out that many reality shows follow the lives of rich white people, and yet that often goes unremarked upon. He also insists that Bling Empire is not about the money but the people. "I experienced so much more to the show" than just "buying cars and showing off," he says. There are "actual stories of family, of finding your place in a different part of the world." The cast may all look good, he jokes, but they're not one-note. "We work hard" and "we show all facets of humanity. This show has all of it."

For Kevin, the series is deeply personal. "I hope maybe my birth parents see this," he says. "Hopefully somebody in Korea watches this and maybe somebody will reach out, if they know anything."