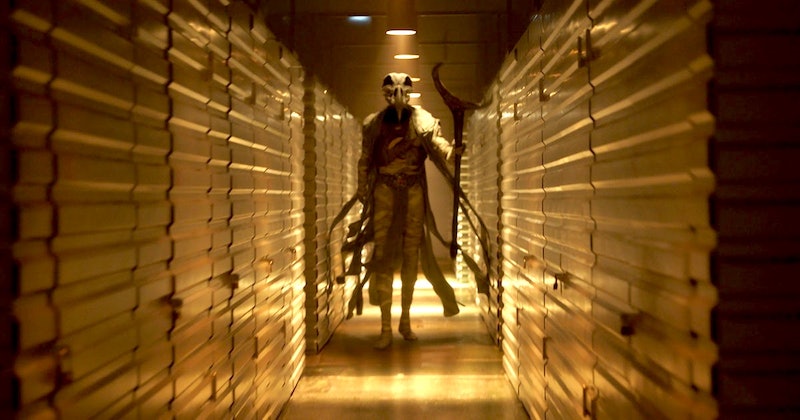 On March 30, MCU fans were introduced to the franchise’s latest antihero, Moon Knight, in Marvel’s new Disney+ series of the same name. Operating under the guise of night and powered by the moon, Moon Knight (Oscar Isaac) — aka Marc Spector, aka Steven Grant, aka Jake Lockley — keeps the streets safe with his own brand of brutal justice. Unlike his comic contemporaries, Marc didn’t get his powers from a radioactive spider, gamma radiation, or a super serum. Instead, his abilities come from the divine intervention of the Egyptian god Khonshu. Here’s what to know about the mythological figure.

In the Marvel comics, Khonshu is known as the “God of the Moon,” serving as one of the Heliopolitan gods who live in an extra-dimensional realm neighboring earth. Despite being a powerful god, Khonshu himself cannot affect Earth directly, so he chooses mortal proxies known as Moon Knights to operate on his behalf. He’s also known as the guardian of “travelers in the night,” making him the ideal shepherd for a vigilante who’s chosen to work under the shadow of the moon. As for his appearance, Khonshu has a massive raven skull floating just above his shoulders and sports either tattered robes and wrappings or a modern white suit. He also walks with a crescent moon staff that allows him to conduct lunar energy.

In the comics, Marc Spector becomes Moon Knight after nearly dying at the altar of an idol of Khonshu while raiding an Egyptian tomb. The deity convenes with Marc’s spirit and offers him another chance at life under the circumstance that Marc will become his subordinate. However, upon returning to the land of the living, Marc believes that his encounter with Khonshu was little more than a near-death hallucination. When his powers — immense strength, quickness, and durability — begin to develop, he starts thinking it was real.

Due to Marc’s dissociative identity disorder, Khonshu typically appears via visions and calls upon one of Marc’s multiple personalities to carry out his wishes. In doing so, Moon Knight often finds himself seriously injured, only for Khonshu to mend or even revive him. Despite granting Marc otherworldly abilities, Khonshu isn’t exactly benevolent: He frequently chastises the vigilante or abuses their relationship by taking advantage of Marc’s psychosis.

Is Khonshu Based On A Real God?

In the series’ first episode, Steven Grant speaks about the Ennead of Egyptian mythology, which refers to a group of nine deities. Khonshu isn’t part of the grouping in reality, but is a significant character in Egyptian mythology. Also known as Khonsu, his name means “to travel.” He was the god of the moon and time, as well as the god of healing. He’s often displayed in Egyptian iconography as having a human body but the head of a falcon. With this information, it’s clear where the MCU has taken liberties with the deity’s historical significance.

What Can We Expect From Khonshu On Moon Knight?

Thus far in Moon Knight, we’ve only seen brief glimpses of Khonshu, where he appears to look very similar to his comic origins complete with a staff, floating raven head, and mummified wraps. Just as in the comics, he’s also present as a voice in Marc/Steven’s head, and chooses Marc to be his Earth-bound champion. In an interview with Polygon, Moon Knight director Mohamed Diab spoke about the process of bringing Khonshu to life. “We had an Egyptologist … who was overseeing how everything is authentic as possible, [but] we still had a lot of creative license,” he said. “The way [Khonshu] looked kept developing and developing and developing. It was very important to connect the way he looks to the suits of Marc and Steven. Their suits are actually from their imaginations, and inspired by Khonshu, too.”

Karim El Hakim carries out the physical performance of Khonshu, while F. Murray Abraham (Amadeus) provides the character’s voice. Audiences will have to wait and see how Marc and Khonshu’s relationship will develop over the season, and whether or not they can maintain an amicable arrangement.

More like this
'The Last Of Us' Video Game Revealed Tess’ Fate In The HBO Series
By Brad Witter
Wait, Is Barney Stinson Related To Sophie On 'HIMYF'?
By Gretchen Smail
New Details About Jeremy Renner's Snowplow Accident Reveal The Actor's Intentions
By Sam Ramsden
The Plane Crash In 'Dear Edward' Is Based On A 2010 Tragedy
By Grace Wehniainen
Get Even More From Bustle — Sign Up For The Newsletter
From hair trends to relationship advice, our daily newsletter has everything you need to sound like a person who’s on TikTok, even if you aren’t.