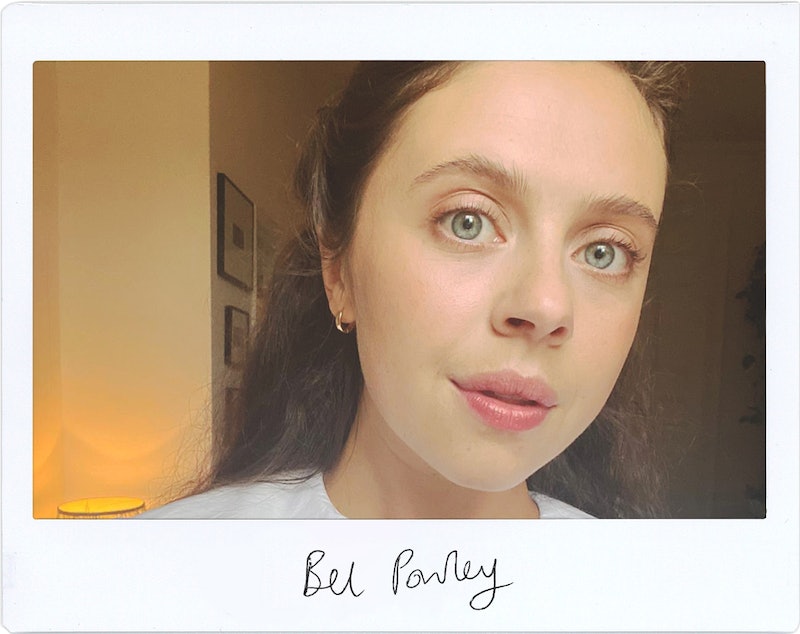 When celebrities (virtually) hang out with Bustle writers, we want to give them the chance to leave their mark. Literally. So we hand them a pen, a piece of paper, a few questions, and ask them to get creative. This time, The King of Staten Island star Bel Powley is leaving her mark in the Bustle Booth.

When British actor Bel Powley first began crafting the accent for her King of Staten Island character, she sought out a veteran of the borough: her co-star Pete Davidson's mom. “We were around Pete's family and close friends the whole time we were shooting,” Powley, 28, tells Bustle of learning from Amy Davidson on the set of her son's semi-autobiographical film. “They are all major Staten Islanders.” Powley also spent hours watching Made in Staten Island — a reality TV show about the children of Staten Island's most infamous mobsters — to really perfect it.

Mastering the Staten Island accent was just the beginning of cracking Kelsey, Davidson's character Scott's best friend-turned-love interest who's ride or die for her overlooked borough. (She’s adamant that it’s due to blow up, like Brooklyn, and applies for a job as a civil servant to make it happen.) But the bold, hoop earring wearing Kelsey isn’t the typical girlfriend character. For starters, the two aren’t even officially together. Kelsey and Scott's love affair is more “situationship” than “relationship” — which was something Powley was thrilled to depict on screen. “It's pretty important to me that we show the grey area [of relationships],” says Powley of their explosive yet tender dynamic. “Growing up I never watched movies where relationships were truly and honestly complex.”

Powley also didn’t see many women like Kelsey as love interests onscreen. “There are too many movies where the girlfriend character would be an enabler or put up with some sh*t without ever saying how they felt," Powley says. "Kelsey is very sure of herself." When burnout Scott tries to use Kelsey for a place to stay during a period of homelessness, Kelsey doesn't find it endearing that he leans on her — she kicks him to the curb and tells him to get it together.

Kelsey's self-assurance also rubbed off on Powley. Especially when the comedy newcomer had to hold her own in scenes with seasoned comedians like Bill Burr and Steve Buscemi. But by the end she was improvising scenes of her own. "[When Kelsey says], 'Did you just f*ck me for shelter?' That scene was meant to go in a completely different direction, we improvised that from top to bottom and felt our way through it," Powley says of delivering one of the film's best lines. "Everything about Kelsey was decided between Judd [Apatow], Pete, and I — even the fact she the fact she is obsessed with Staten Island. It was all so collaborative."

Get to know more about Powley in her Bustle Booth questionnaire below.