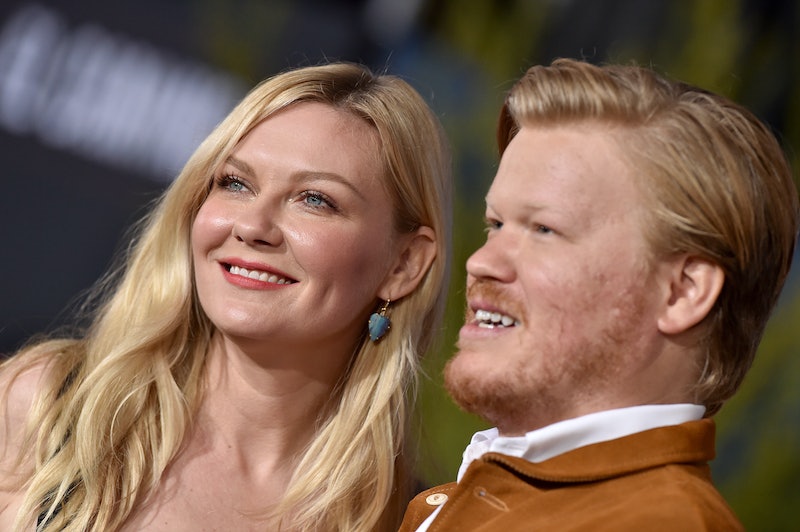 Unless he's planning on running a cheerocracy, Kirsten Dunst doesn't want any part of Kanye West's 2020 Vision. On Wednesday, Aug. 19, West tweeted out a seemingly homemade campaign poster featuring images of Dunst, Vogue Editor-in-Chief Anna Wintour, and others alongside his "Kanye West 2020 Vision" slogan. And it seems he did so without their consent.

Based on her response to the poster, the Bring It On star has no idea what's going on, but she doesn't seem eager to be a part of the rapper's quest to become president. "What’s the message here, and why am I apart of it?" Dunst responded to West's tweet. The rapper hasn't shared why he included the actor in his latest campaign message, but Twitter users have a few ideas. One user, @OceanChildish, tweeted, "He wants you as a VP! Wouldn’t that be great." Another, @Siggy_P added, "Don’t pretend you don’t know what this is, Madam Vice President." For now, Dunst's inclusion remains a mystery that even she doesn't have an answer to.

The only thing West's tweet conveys concretely is that he appears to be forging ahead with his bid to run for president under the Birthday Party banner, though his plan to run as a third-party candidate has hit a number of snags. Most notably, he missed the deadline to be added to the ballot in most states. As of right now, West will appear on the ballots in Arkansas, Colorado, Oklahoma, Utah, and Vermont, and his campaign is petitioning for him to be added in several other states as well, as reported by People. Even if the "Power" rapper somehow won all five states, he could only net 31 electoral college votes, making it impossible for him to reach the 270 votes he would need to win the election.

After West criticized his family and shared intimate details of his personal life at a campaign rally in July, his wife Kim Kardashian called for "compassion and empathy," and reminded people that West has bipolar disorder. "People who are unaware or far removed from this experience can be judgmental and not understand that the individuals themselves have to engage in the process of getting help no matter how hard family and friends try," she wrote on her Instagram Story at the time, seemingly responding to reports that the rapper might be going through a manic episode.

Kardashian hasn't publicly shared her thoughts on West's presidential bid, but earlier this month a source told People, "Kanye has made it clear that he will continue to run for president. Kim is not happy about it, but this isn't her focus. She just wants to do what's best for the kids."