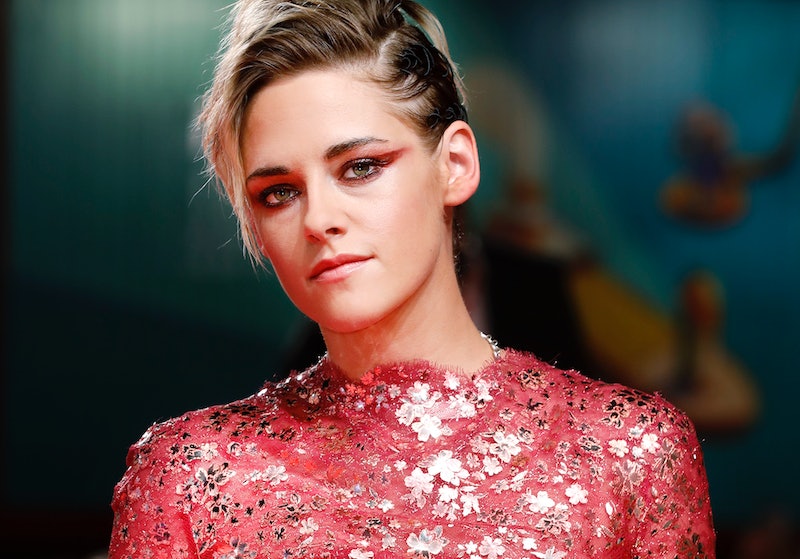 Dianamania, a term that references the pop culture obsession with the late Diana, Princess of Wales, has always been fervent, but it’s reached a fever pitch due to the latest season of The Crown. It’s been several decades since the People’s Princess’ death, but it all still feels raw among her admirers. Among them is Kristen Stewart, who will play Princess Diana in the upcoming biopic Spencer. During an appearance on Jimmy Kimmel Live! on Wednesday, Nov. 25, the actor revealed that she’s just about as protective of Lady D as you are.

In the interview, Stewart addressed the public's adoration of the late royal and recalled the moment she learned of her death at the age of 7. (Diana died by car crash in August 1997 in Paris.) “I feel sort of the same way about her,” Stewart said. “[Her death] happened really quickly. I didn’t grow up with her in the same way [because] I was really young when she passed away.” However, she recalled the sea of flowers in front of Buckingham Palace. “I remember being like, ‘What are all of those? I’ve never seen so many in one place,’” she said.

“I didn’t really know what was going on, but now, it’s hard not to feel protective over her,” Stewart continued. “I mean, she was so young.”

Spencer, set to begin production in early 2021, will chronicle Princess Diana’s final three days before her death. The film is titled after the princess’ birth name, Diana Spencer. During her interview, Stewart said the biopic would be a “poetic internal imagining of what that might have felt like, rather than giving new information.” She said, "We kind of don’t have a mark to hit. We just also love her."

In October, Stewart offered insights on her Princess Diana prep process. "The accent is intimidating as all hell because people know that voice, and it's so, so distinct and particular,” the Twilight actor told InStyle. “I'm working on it now and already have my dialect coach. In terms of research, I've gotten through two and a half biographies, and I'm finishing all the material before I actually go make the movie." She added, “It's one of the saddest stories to exist ever, and I don't want to just play Diana — I want to know her implicitly."

More like this
Princess Diana Gave Her Home The Ultimate Revenge Makeover Post-Divorce
By Darshita Goyal
What Was Really In Princess Diana & Prince Charles’ Divorce Settlement
By Karen Fratti
Meet Kelly Fisher, Dodi Fayed’s Ex-Fiancée
By Karen Fratti
Charles & Diana Were Reportedly On Good Terms Before Her Death
By Darshita Goyal
Get Even More From Bustle — Sign Up For The Newsletter