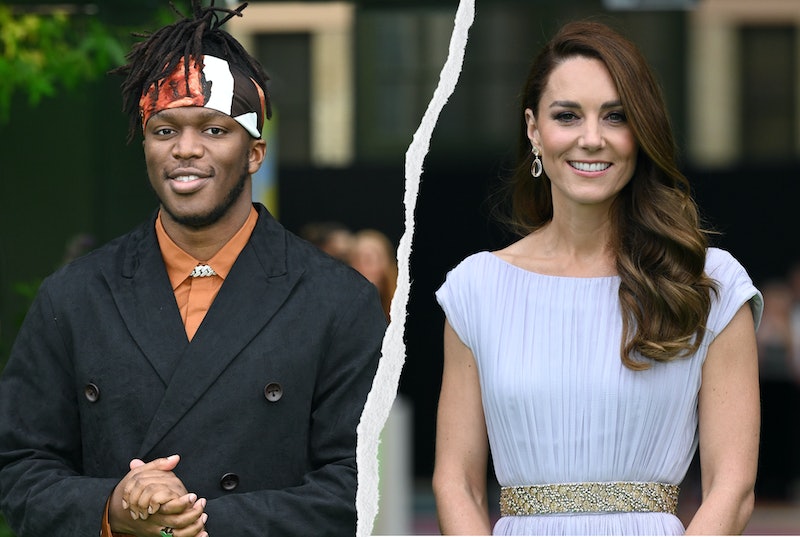 What happens when the king of the internet meets the literal future king and queen? He scopes out the possibility of a collaboration, of course. On October 17, YouTube superstar and rapper KSI joined Prince William and Kate Middleton on the green carpet at the Earthshot Prize at Alexandra Palace alongside other celebs including Emma Thompson and Ed Sheeran. The wowed with a statement suit at the event and also performed on stage – but it sounds like he was there to get an inside scoop on the royals, too.

KSI shared a picture with his 10.5 million Instagram followers that shows him and presenter Clara Amfo chatting to William and Kate at the event. He appears to be having a pretty in-depth chat with the Duchess of Cambridge and in the picture’s caption, he revealed he’d asked Middleton a pretty niche question.

“I asked Kate if she’d ever make a TikTok,” he wrote.

The answer? Sadly, it was a no. So no collabs on the horizon, then. But KSI did go on to add, “Seriously though, my life keeps getting more and more surreal fr @dukeandduchessofcambridge @earthshotprize.”

KSI’s followers were impressed by his bravery in asking the royals if they plan on expanding their social media presence. One wrote, “Omg JJ you didn't say that to the future queen!!!” Another wrote, “Do they know they’re meeting Lord KSI?” While another said, “POV: official King Lord Babatunde talking to his royal friends.”

Sir David Attenborough gave a speech during the awards and later in the night, KSI joined Coldplay, Ed Sheeran, Yemi Alade, and Shawn Mendes in performing. In keeping with the eco-friendly message, the performances at the Earthshot Prize were powered by 60 cyclists pedalling on bikes.

Prince William and Sir David Attenborough conceptualised the event and 750 people applied to be recognised by the Earthshot Prize for their tireless efforts to combat climate change. They were judged down to 15 finalists. Find out details about the winners here.

More like this
Kate Middleton Wore The Ultimate '90s Power Suit
By Sam Ramsden
Princess Diana’s Brother Shared A New Photo Connected To Her Childhood
By Darshita Goyal
Helena Bonham Carter Doesn't Think 'The Crown' “Should Carry On"
By Sam Ramsden
The Spice Girls Are Set To Reunite At King Charles III’s Coronation
By Sam Ramsden
Get The Very Best Of Bustle/UK
Sign up for Bustle UK's twice-weekly newsletter, featuring the latest must-watch TV, moving personal stories, and expert advice on the hottest viral buys.