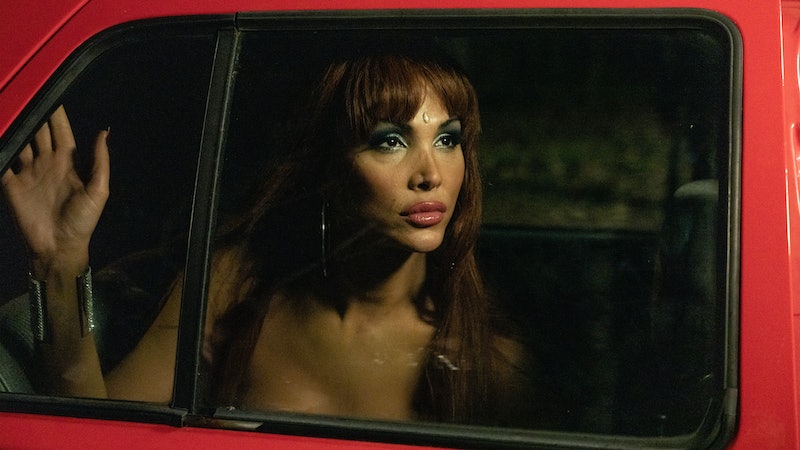 To commemorate Transgender Awareness Week, HBO Max is debuting Javier Ambrossi and Javier Calvo's miniseries Veneno. Based on Not A Whore, Not A Saint: The Memories of La Veneno by Valeria Vegas, Veneno tells the story of 1990s transgender superstar performer Cristina Ortiz, better known as La Veneno ("The Poison"). Famous for being the first transgender woman to be widely recognized in Spain, Ortiz is hailed today as a pioneer in trans representation.

The series follows Valeria (Lola Rodríguez), a young journalism student who finds a kinship with Ortiz as she begins to explore her own evolving gender identity. As Valeria begins to write the memoir, she starts to unwrap who La Veneno really is, beyond all the glamour and lights. Per El País, Ortiz was born on March 19, 1964 in Adra, located in the Almeria province of Spain. She was the fourth of six siblings, and had an unhappy childhood in the conservative town. "My parents did not support me," she said, recounting how her mother would beat her and call her slurs, while her siblings would often deadname her.

Her family eventually kicked her out of the house. Despite being illiterate, Ortiz found work as a model and waiter in Torremolinos before finally settling in Madrid in the early '90s. After meeting a transgender woman for the first time on a trip to Thailand, Ortiz began to take hormones and transition. A few months later, Ortiz became a sex worker in Madrid's Western Park. In April 1996, reporter Faela Saiz interviewed Ortiz for a feature on prostitution. The segment aired on the late night show Esta Noche Cruzamos el Mississippi, and Ortiz' frank and vulgar humor immediately won over the audience. Show host Pepe Navarro subsequently invited Ortiz to become a regular on the show, and she became a nationally recognized TV personality.

Ortiz was "a mixture of tenderness, verbosity and out-of-the-ordinary folksyness," Navarro told La Razón. "Someone tender and abrupt; happy and immensely sad."

Though Navarro's show ended in 1997, Ortiz' popularity soared, and she was able to springboard into a music career. In 1996 she recorded two singles, "Veneno Pa' Tu piel" and "El Rap de La Veneno." She went on to tour around Spain, performing at nightclubs and festivals. She also became a model, and acted in both pornographic films and the TV series En Plena Forma.

Her blossoming career was cut short in 2003, however, when she was implicated in a case of arson and insurance fraud. She was accused by her then-boyfriend of intentionally setting fire to their apartment to collect the insurance money. She spent three years in a men's prison, as trans people at the time could not choose whether to serve in a men or women's prison. (According to El País, that option became possible after a 2006 case.) Per La Vanguardia, she reportedly endured abuse and rape behind bars, and her health deteriorated rapidly.

Ortiz struggled to fully recuperate in the years following her release. Per Sur, she continued to experience bulimia and depression, worsened by the media's fixation on the weight she gained during her time in prison. In May 2013, she reappeared on the TV show Sálvame Deluxe with her new boyfriend, but within months he ran off with her life savings. In 2014, she told La Vanguardia that she served eight months in prison again after being mistaken for another suspect.

Vegas released Ortiz' memoir in October 2016, in the hope that the book would give Ortiz back the dignity and renown she once enjoyed as one of Spain's top performers. The memoir sold out immediately, and contained shocking confessions of hookups with famous celebrities, politicians, and footballers. In the wake of its release, Ortiz said she received death threats.

On Nov. 5, 2016, Ortiz was found half unconscious in her house, covered with bruises and with a deep head wound. She was taken to La Paz University Hospital in Madrid, where she died four days later. Per El Mundo, the coroner stated that Ortiz accidentally fell down the stairs after mixing alcohol and her anti-anxiety medication. But many still have suspicions that Ortiz was the victim of a hate crime, and she was targeted for the memoir's scandalous allegations against Spain's most powerful men, though that has never been confirmed.

Her ashes were scattered in Madrid's Western Park, and today you can find a commemorative plaque honoring her there. "She was not an activist but a person who left a mark and made a deep impression," one attendee told El País at the plaque unveiling. "In her own way, she opened a window of visibility for the trans collective." You can watch her story unfold on HBO Max starting Nov. 19