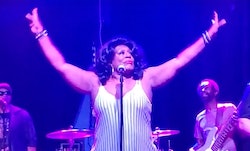 Anita White, a blues, soul, and funk singer professionally known as Lady A, has responded to Lady Antebellum's new lawsuit, saying she won't let them position her as an “angry Black woman.” In an interview with Vulture published on July 9, White said she is “not going to be erased” in the wake of the lawsuit filed by the country group formerly known as Lady Antebellum. Composed of Hillary Scott, Charles Kelley, and Dave Haywood, Lady Antebellum dropped the Civil War-era “Antebellum” and changed their name to Lady A in June, citing “necessary changes to practice antiracism” in the wake of nationwide racial justice protests. But what may have started as a genuine gesture turned out to be much more complicated: White has operated under Lady A for two decades.

Now, in an effort to affirm usage of the name, the trio has filed a lawsuit against White and cited their trademark ownership after White requested $10 million. According to White, the payment would have been split, with half helping her rebrand after a 20-year career, and half donated to Black Lives Matter charities. White added that she believes the band is positioning her as an “angry Black woman,” but she won’t let up. “I was quiet for two weeks because I was trying to believe that it was going to be OK and that they would realize that it would be easier to just change their name,” White told Vulture. “Or pay me for my name.”

She continued, “Five million dollars is nothing, and I’m actually worth more than that, regardless of what they think. But here we go again with another white person trying to take something from a Black person, even though they say they’re trying to help.” White added that, as far as allyship goes, the group had to be willing to put their money where their mouth is. “If you want to be an advocate or an ally, you help those who you’re oppressing," she said. "And that might require you to give up something because I am not going to be erased.”

White has also claimed that the trio wanted to record a song together and film the process, documentary style, in the interest of performative allyship. In a Rolling Stone feature published on July 10, White detailed her meeting with the band. “We were on the call with our teams and had some ideas. I could be ‘Lady A the Artist,’ they could be 'Lady A the Band'; that way, we could let people know that works,” she said, adding that the band wanted them both to use the name Lady A, which she didn't think would work. Eventually, she claimed, "They came back with their agreement, which didn’t address my concerns, and I knew what they wanted. They wanted a story that showed us getting along. They wanted me to make them look good in the eyes of the public, and that’s why that Zoom call was so important to them.”