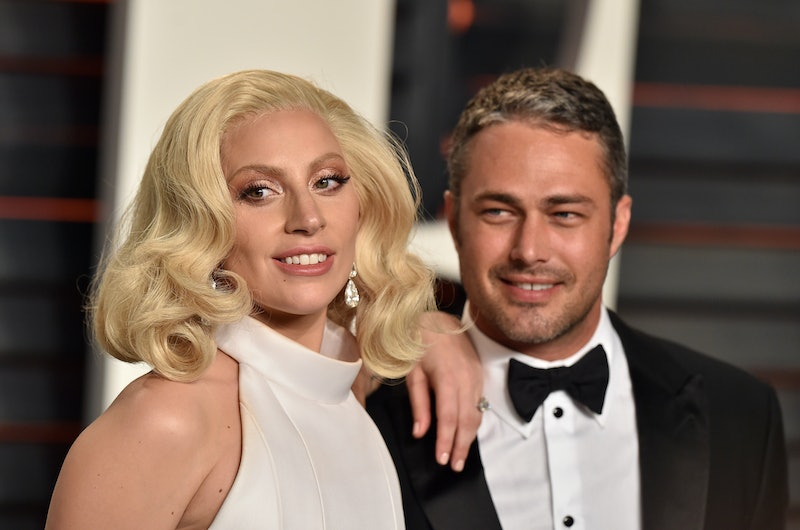 Before diving into a Joe Biden-themed rendition of "Yoü and I," Lady Gaga shouted out her ex-fiancé Taylor Kinney at the Democratic presidential candidate's Pennsylvania rally on Monday, Nov. 2. Gaga joined Biden, vice presidential candidate Kamala Harris, and musician John Legend in Philadelphia to embolden people to cast their votes on Election Day. And after gracing attendees with a performance of "Shallow," the singer briefly reflected on her 2015 engagement to the Chicago Fire actor.

"Did you all know I used to live here in Lancaster, Pennsylvania?" the singer asked the crowd. "I was engaged to a man from Lancaster, Pennsylvania." In 2016, however, Gaga and Kinney split after five years together. "I loved him so much but it just did not work out," she added. Fortunately, the couple's split did not influence how she feels about the state or the people who live there. "I still love me a Pennsyvlania guy," she said. "I love Joe, so Joe's my new Pennsylvania guy."

After reminiscing about her past relationship, Gaga began singing a new version of "Yoü and I," which was complete with custom lyrics for Election Day. The music icon swapped out the word "Nebraska" for "Pennsylvania" and included Biden's name in the song's chorus. "Something, something about my cool Pennsylvania guy," she sang. "There's something about Joe, you and I."

Gaga and Kinney first met on the set of the singer's "Yoü and I" music video in 2011 and got engaged on Valentine's Day 2015. The “Rain on Me” singer confirmed the split on Instagram over a year later in July 2016. "Taylor and I have always believed we are soulmates," she wrote. "Just like all couples we have ups and downs, and we have been taking a break. We are both ambitious artists, hoping to work through long-distance and complicated schedules to continue the simple love we have always shared. Please root us on. We're just like everybody else and we really love each other."

Gaga is now dating Michael Polansky, a tech entrepreneur. The two became Instagram official in February of this year. Polansky also attended the Biden rally with Gaga, who apologized to her beau mid-"Yoü and I" for referencing Kinney. "To my boyfriend here tonight, I'm sorry I had to do this whole 'Pennsylvania, I dated a guy here' thing," she said. "I love you so much, but it's true."

More like this
What Is Ariana Grande's Net Worth? When It Comes To Money, She Has No “Problem”
By Hugh McIntyre
‘The Bachelorette’s Michelle Young & Nayte Olukoya Explained Their Breakup
By Stephanie Topacio Long
Lady Gaga Delivered A Million-Dollar Performance At A Private Wedding
By Maxine Harrison
Michelle Obama & Taylor Swift React To The Supreme Court Overturning Roe v. Wade
By K.W. Colyard
Get Even More From Bustle — Sign Up For The Newsletter