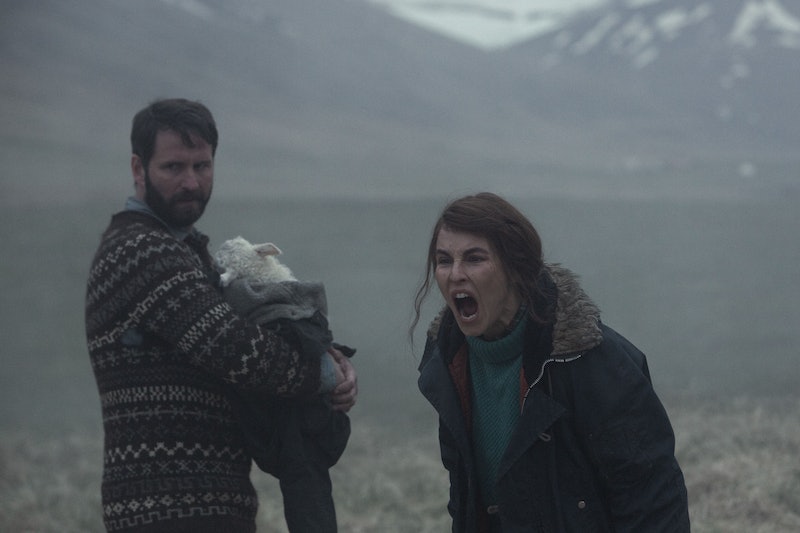 There’s a good chance that after watching Valdimar Jóhannsson’s Lamb, you’ll leave the theater wondering what on Earth you just saw. Warning: spoilers for Lamb follow.

Told in three chapters, Lamb follows Maria and Ingvar (played by Noomi Rapace and Hilmir Snær Guðnason), a married couple who manage a ewe farm on a remote Icelandic hillside. One of their ewes delivers a lamb that Maria and Ingvar are instantly enamored with, and decide adopt her as their own, giving her the name Ada. Later, audiences see that Ada has a half-human body.

Maria and Ingvar’s motives for raising the lamb are clear: the couple seems to have recently lost their own child. This adoption, however, is unnatural — perhaps even more so than finding a lamb-human hybrid in the first place. Ada’s mother repeatedly appears at the couple’s door, bleating for her child’s return. Maria, determined to continue raising Ada as a human child, shoots and kills the animal.

In the midst of the maternal drama, Ingvar’s brother, Pétur, drops by the farm. It’s heavily hinted that Pétur and Maria previously had an affair. After at first rejecting Ada, Pétur, too, becomes enamored with her.

For a time, they’re a happy family: mother, father, uncle, and daughter, all living in harmony. But when Pétur oversteps, Maria decides it’s time to cast him out. While Maria drops Pétur at the bus stop, chaos breaks loose at home. A sheep-man comes to claim Ada, shooting Ingvar in the process. The film ends as Maria returns home to find her husband dying and Ada gone.

There’s a lot to unpack by the time the credits roll. Not only is Maria’s fate left ambiguous, but there isn’t much context as to who the sheep-man is, or why he’s just coming now. In a recent interview with Bustle, Rapace gave more context to the film’s ending. She has her own theories about Ada and Maria’s fates.

“In a way, maybe Ada was never there? Maybe it was a way to heal,” Rapace says, citing Maria’s lingering grief over losing a child. “[Pétur] comes back right when [she and Ingvar] are starting to heal. And then that night when we got drunk and danced and all that, and then my husband gets too drunk and falls asleep ... When I come back, my husband, Ingvar — he thinks that I left with his brother, and he shot himself. That's a possible version.”

Another possible explanation? That Ada came into Maria’s life in order to “awaken [Maria] and give her another chance to live.”

“In the beginning of the film, she's almost not there. There's no emotional oxygen coming into her, because the pain is too great and too big after the loss of her daughter,” Rapace says. “So Ada ... Maybe she always knew that Ada was only going to be there for a short time … She's not trying to find her. And maybe you need to give up on something to start a new chapter.”

More like this
Taylor Swift Is Writing & Directing Her First Movie
By Jake Viswanath
Meghan Markle Wishes Learning Royal Protocol Was Like 'The Princess Diaries'
By Jake Viswanath
Yes, That's Lindsay Lohan's Sister Singing In The 'Falling For Christmas' Movie
By Radhika Menon
'The Holiday' Director Just Addressed *Those* Sequel Rumours
By Sam Ramsden
Get Even More From Bustle — Sign Up For The Newsletter