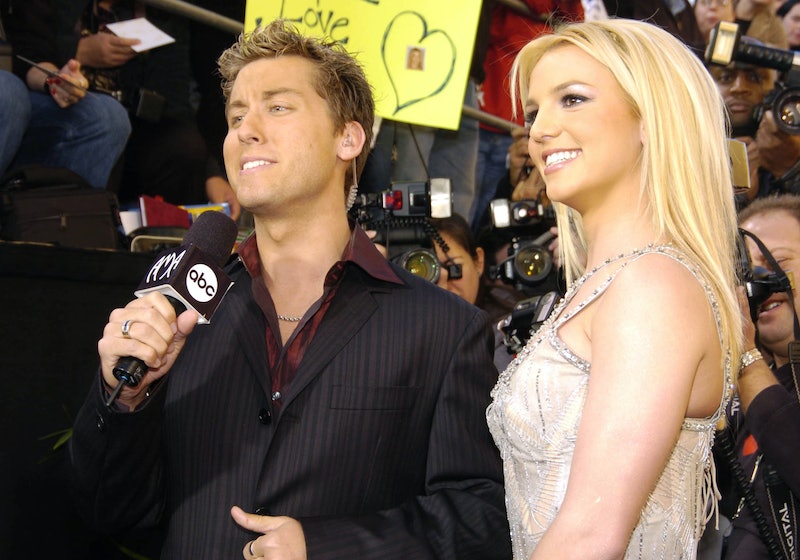 As fans continue to promote #FreeBritney, Lance Bass gave an update about Britney Spears' conservatorship after speaking to her sister, Jamie Lynn Spears. The *NSYNC alum told Entertainment Tonight on Monday, Sept. 28, that a recent conversation he had with the Zoey 101 star made him feel "so much better" about Spears' ongoing legal battle.

"They aren't as worried as we are," he said, referring to Spears' family. He continued, adding that the public and fans "have no idea what's really going on. So we just have to trust that the loved ones around her are doing the right thing." While Bass also admitted to not knowing every detail about the situation, he said he believes in Spears' sister. "If Jamie Lynn is OK with everything going on, I feel like she really has her sister's back during all this," he explained. "So I trust her to give us the real information."

Spears has been under a legal conservatorship since 2008, with her father, Jamie Spears, initially appointed as her conservator, meaning that he takes primary control over her finances and businesses. Jamie stepped down from the position in August 2019 due to "personal health reasons." As of September 2020, Spears is asking the court to make details of her conservatorship public and fighting against her father's request to re-appoint Andrew Wallet as her co-conservator. Instead, she is asking for temporary conservator Jodi Montgomery to be made permanent and for a “qualified corporate fiduciary" to control her estate and finances.

Spears' legal situation has come under intense scrutiny thanks in part to the rapid growth of the online #FreeBritney movement, which advocates for the singer to be released from the conservatorship completely so she can regain control of her life and make her own legal and financial decisions. Bass told ET that, despite his trust in Jamie Lynn, he remains a supporter of the movement. "I hope everyone figures out exactly what is happening in her life," he said. "I do believe that things are settling the way they should be… There's a judge in charge of all this, so we really need to just trust the judge in the situation and know that things will work out for the best."

Bass' relationship with Spears dates back to his *NSYNC days in the late '90s, when Spears famously opened for the boy band right as her own career exploded. In fact, Spears was one of the first people that Bass came out as gay to — on the same night that she spontaneously married Jason Alexander in Las Vegas (their marriage was annuled 55 hours later). "I took her to her room, and we were sitting on her bed and she wouldn't stop crying, so I was like, 'I'm gay!,'" he recounted on Watch What Happens Live with Andy Cohen in July 2019. "It made her stop crying," he said, adding that it made her "chuckle" after a tumultuous night.

His friendship now extends to the entire Spears family, especially her sister. Bass even told ET that he and Jamie Lynn were "going to be working together soon," but he opted to let her reveal the details at a later time.

More like this
Britney Spears Shares & Deletes Photos Of Justin Timberlake From 22 Years Ago
By Jake Viswanath
20 Years Ago, J.Lo Was Supposed To Kiss Madonna With Britney At The VMAs
By Jake Viswanath
Victoria Beckham’s Spice Girls Audition Was V. Theatrical
By Sam Ramsden
Twitter Can’t Believe The Madonna Biopic Is Scrapped & Fans Have A Solution
By Alyssa Lapid
Get Even More From Bustle — Sign Up For The Newsletter
From hair trends to relationship advice, our daily newsletter has everything you need to sound like a person who’s on TikTok, even if you aren’t.