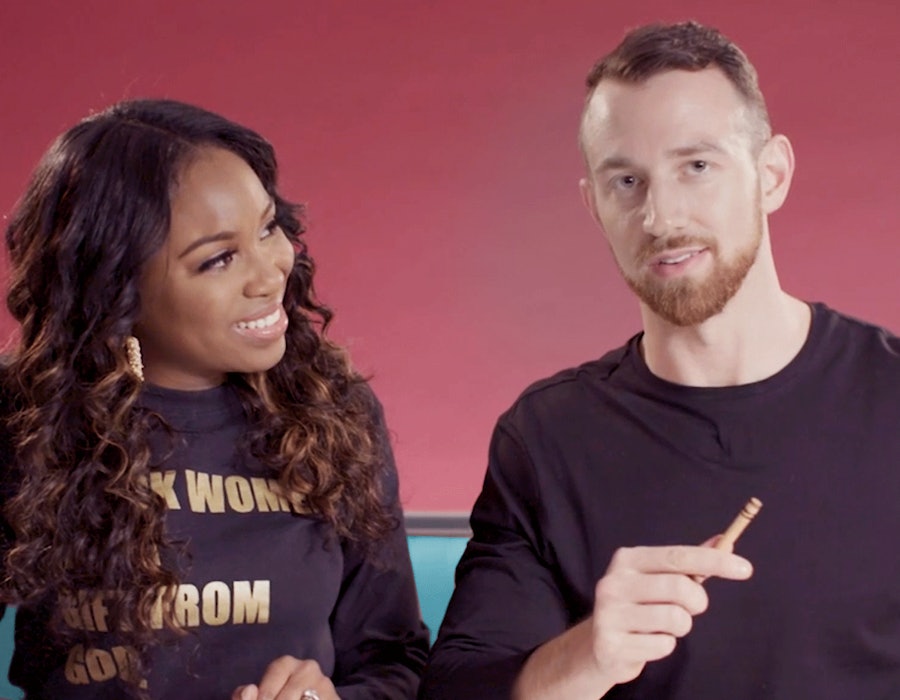 Love Is Blind, the Netflix show and social experiment where couples attempted to fall in love without ever actually getting to see each other, feels like a distant, pre-quarantine memory. However, anyone that watched the show definitely remembers Cameron Hamilton and Lauren Speed, the adorable couple who actually did fall in love on the show — and stayed in love after they met face to the face for the first time.

“I see Cameron as my Prince Charming, you know,” Speed says. “He’s really just love, and he has beautiful green eyes.”

Hamilton shares the sentiment. “Lauren’s the most beautiful woman I’ve ever seen — she’s my muse.”

When the couple stepped into the Bustle Booth, it was clear that they were still very much in love, just as they were on the show. They explained that after the show, it was nice to get back to the business of regular dating. Their first post-show date was at a bar — in other words, the most normal thing in the world, compared to how they met and what they’d already experienced together.

For those unfamiliar with the show, each couple could only interact in rooms called “pods,” which had a shared wall. The couples could hear each other clearly, but couldn’t see each other at all. The goal was to see if they could connect without seeing each other in person — and to finally get to meet, they had to get engaged first, sight unseen. Not exactly a typical set of circumstances for new love, but surprisingly, some of the couples actually worked out, Speed and Hamilton included.

“Being able to meet Cameron and learn more about him — that was our introduction, through that mystical wall,” Speed says. “The worst part, though, was not being able to touch each other.”

Hamilton concurred. “Especially after we got engaged,” he said. “We had to wait 24 hours to actually see each other. It was the longest 24 hours ever, but here we are today, a year-and-a-half later, so it was well worth the wait.”

See more from Lauren Speed and Cameron Hamilton on life after Love Is Blind in the Bustle Booth above.

More like this
All The Clues About Aly & Zach’s Relationship Status After 'The Bachelor'
By Brad Witter
Mack & Domynique Reportedly Had An "Epic" Breakup On 'Married At First Sight'
By Brad Witter
All The Clues Clint & Gina Aren’t Still Together After 'MAFS' Season 16
By Brad Witter
Owen Thiele Asked Sundance Attendees About Films That Don’t Exist
By Grace Wehniainen
Get Even More From Bustle — Sign Up For The Newsletter
From hair trends to relationship advice, our daily newsletter has everything you need to sound like a person who’s on TikTok, even if you aren’t.