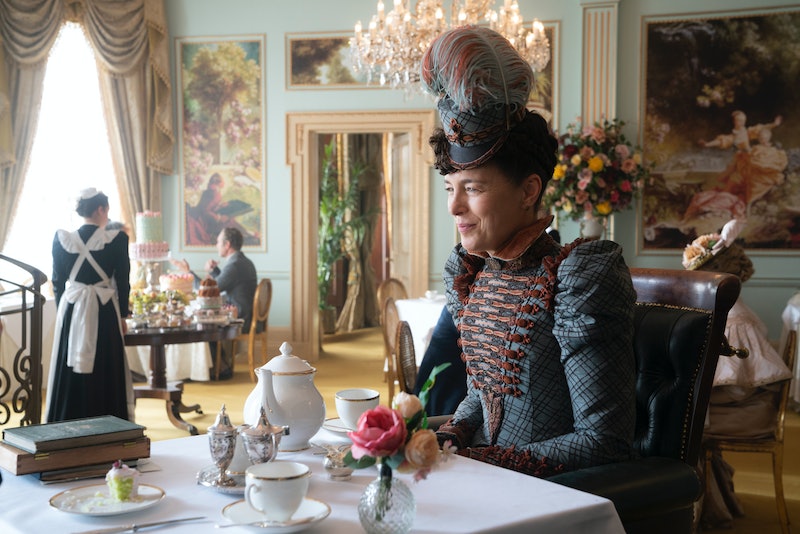 Spoilers for The Nevers Season 1, Episode 2. After that cliffhanger, fans will want to rethink everything they thought they knew about Lavinia Bidlow on The Nevers. At the end of the April 18 episode, it was revealed that Dr. Hague is working for Lavinia — and considering that Hague is violently experimenting on the Touched, Lavinia may not be quite the proponent of the Touched that she’s pretended to be.

Prior to this big reveal, viewers thought Lavinia was on the good side. After all, she helps fund the orphanage that acts as a refuge for the Touched. But there have been little clues all along that she’s hiding something. For one, the costume designer gave her layers upon layers of clothing to intentionally hint at Lavinia’s many secrets, according to Town & Country. Lavinia has also showed her fear of the Touched on more than one occasion. When speaking to Penance, Lavinia made a point to worry that Lucy Best’s turn is breaking anything she touches; she also compared Primrose to a tiger because of her height. And when Lavinia gathered several of the Touched for an exhibitionist party at her home, she told the attendees not to scare or overwhelm anyone with their tricks.

She also forbade her little brother Augie from talking to Penance, in part because Penance is Touched. In an interview with io9, Olivia Williams explained that her character is off put by who the Touched are. “This is an incredibly gifted group of people and they’re coming not from the aristocracy. It’s not inherited brilliance, which is what the patriarchy relies on; these are ordinary, working-class people who have extraordinary gifts,” Williams said. “So [Lavinia’s] helping these people but she’s also in a sense harnessing them ... [she finds] it extremely uncomfortable that brilliance is coming from ordinary people, when aristocrats are meant to be extraordinary.”

That notion of her harnessing the Touched is in line with Episode 2 ending. Hague is experimenting on members of the Touched to try to figure out where their powers come from. He’s also put the Touched to work excavating a large glowing orb, which could be from the spaceship that initially spread these powers to the Touched years ago. Perhaps Lavinia is unaware of the scope of Hague’s torture of the Touched, but she seems to know that he’s at least using them for forced labor, and she clearly has no problem with that. Perhaps she’s too scared to question it, as she remarked that whatever the orb and its powers are, “This is war.” That’s likely why she wants to keep the orphanage close. She can get a firsthand look at what the powers are that she’s up against, and even use them to her benefit.

She may also have Dr. Hague employed so he can figure out a way to rid the Touched of their powers. “While [Lavinia’s] intentions might, in one version of history, be good, she’s from that tradition where ‘morally correct’ rich people try to cure ‘morally corrupt’ poor people of their ills,” Williams told the New York Daily News. If Lavinia and Dr. Hague can figure out how the orb fits in, where the powers are coming from, and perhaps how to eradicate them, she’ll have won the “war” as she sees it and cured the masses.

Clearly, viewers should no longer trust Lavinia when she pretends she’s there for the orphanage and the Touched. She’s just keeping her “enemies” close until they’re of benefit to her long game plan.