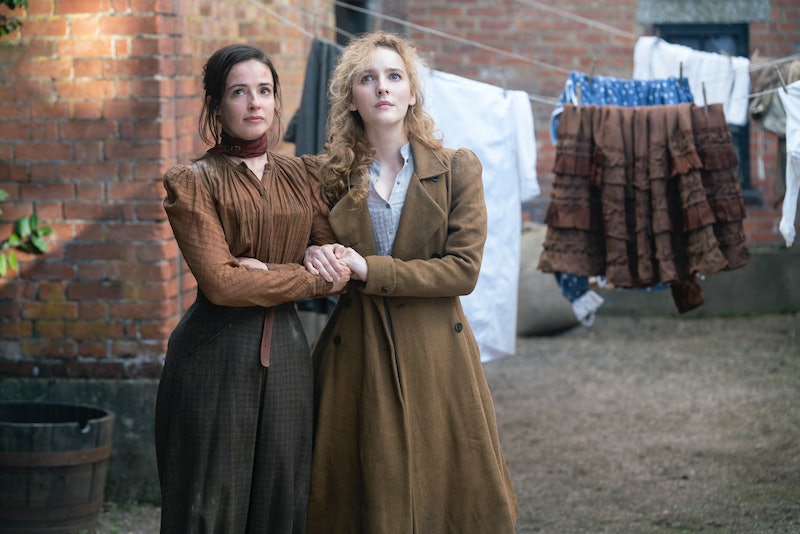 Spoilers for The Nevers premiere. The HBO series The Nevers isn’t your standard period drama. Yes, it’s set in Victorian era London, but after a strange spaceship flew over the city and dispersed glowing dots of energy, scores of people — mostly women, but not all — discovered that they’d suddenly gained special powers. They’re called “the Touched,” and their powers are called “turns.”

It appears that no two people have the same powers, and not all of the powers are being used for good. Just as there are quasi-superheroes in this story, there are also supervillains. Among the evil is Maladie, who “derives power from pain,” according to the official Nevers HBO site. She’s teamed up with Annie, who can wield fire and is fittingly nicknamed Bonfire. But on the hero end of the spectrum, we have protagonists Amalia and Penance, who respectively can see into the future and wield electricity. The duo helps run an orphanage that’s turned into a home for many Touched people who have nowhere else to go. The orphanage’s doctor Horatio Cousens is one of the few men who is Touched; he can heal people with just his hands. Also living there is Primrose, who is 10-feet tall; and Myrtle, who can speak every language (except English, which she can only understand).

According to Variety, orphanage resident Harriet can turn things into glass, and Lucy can break anything she touches. Then there’s singer Mary Brighton, whose voice only reaches the other Touched. She was kidnapped in the premiere by Maladie, but Amalia and Penance are hoping to rescue her and use her power to unite the remaining Touched members.

According to Deadline, we’ll also soon meet a sex worker named Desirée Blodgett, who can make men reveal their deepest secrets. And we’ll likely learn what Augie’s power is soon. He responded to Mary’s voice, so we know he’s Touched — we just don’t yet know what his “turn” is.

As cool as these powers are, the Touched aren’t only up against people like Maladie and Bonfire. They’re also up against a society that doesn’t understand them and is afraid of them. As creator Joss Whedon explained to IGN, the title of the show is meant to illustrate how their community feels about the Touched. “[The Nevers is] a phrase that’s meant to evoke a sort of reaction to their oddity, to what is considered unnatural. The idea that you should never be like this, you should never have existed. Something is not the way it should be, and you don’t have the right to have whatever weird power or ability or that you have.”

At least one character will take his feelings about the Touched to a dangerous level. Doctor Edmund Hague is already doing whatever he can to locate the source of the Touched’s powers. We see in the first episode that some of the Touched have been kidnapped and tortured to fuel Hague’s mission.

They may have abilities that can help them defend themselves, but between Maladie’s crew and Dr. Hague, the Touched are in for quite a fight on The Nevers. Perhaps a fight for their lives.