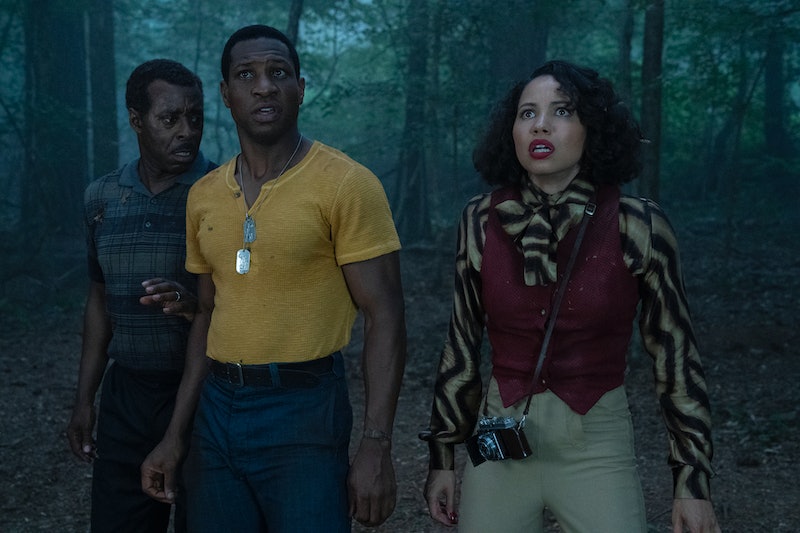 Spoilers ahead for the Season 1 premiere of Lovecraft Country. There are a lot of monsters in Lovecraft Country, both figuratively and literally. After Korean War vet Atticus "Tic" Freeman (Jonathan Majors) returns home in search of his missing father, he embarks on a road trip with his uncle George (Courtney B. Vance) and friend Leti Lewis (Jurnee Smollett). Together, they're forced to contend with racist white people and flesh-hungry monsters simultaneously. But there's one beast Leti is left to battle all on her own. As Smollett tells Bustle along with a group of reporters, she's "fighting both the patriarchy and white supremacy."

As a Black woman in the 1950s, Leti is disillusioned by the limitations of their unequal society and constantly strives to break them. She blows into town with fashionable outfits, big sunglasses, and a camera around her neck, telling Tic that she's been "everywhere" doing "everything." But though she's more interested in being an artist than a typical housewife, her various ventures often leave her strapped for cash and without a home to return to. It's after both of her siblings deny her a place to stay that she ends up on the road with Tic and George.

Leti initially plays off the trip as a lighthearted distraction, but she quickly proves to be the most grounded and capable of the three. When they attempt to eat at a diner formerly designated "safe" by the Negro Travel Guide, it's Leti who spies the white waiter calling the cops and hustles them out just as they start shooting. When Tic storms off after realizing he's led them in circles in the woods of Devon County, it's Leti who warns him that they don't want to be out after dark since it's a sundown county. And of course when things do go terribly wrong, it's again Leti who sprints to save them.

And yet in spite all of this, Leti is constantly struggling not to be underestimated — even by the well-meaning Tic and George, who tend to be dismissive of her concerns. ("Well we're here now," George says when Leti senses they're not welcome at the diner, while Tic simply responds "I know" when she brings up the sundown policy.) Women at the time were perceived as weak, passive, and in need of protection, but Leti "rejects the feminine as it was defined in 1955," Smollett says. Though there are clear moments in which Leti is vulnerable or afraid, she's still the one who springs most quickly into action at the first sign of danger. She's as deeply practical as she is free-spirited, well aware of the realities of being a Black woman in Jim Crow America even as she yearns for more.

"It's an audacious thing to dream, to have a bold and expanded imagination," Smollett says. Having grown up reading the same fantastical sci-fi books as Tic, Leti dreams of living in a modern world where she can freely eat, live, and pursue any career she wants without being accosted for being Black and/or a woman. But reality falls far short of her imagination. "She suffers from this feeling of displacement," Smollett says, and she "desperately wants to be reborn" in a society that accepts her for all that she is.

Tic may be the one trying to find his "secret birthright," but Leti is also on a journey of belonging. Referencing a famous James Baldwin quote, Smollett says that ultimately, "Leti's grasping at life just trying to evolve a space for herself."