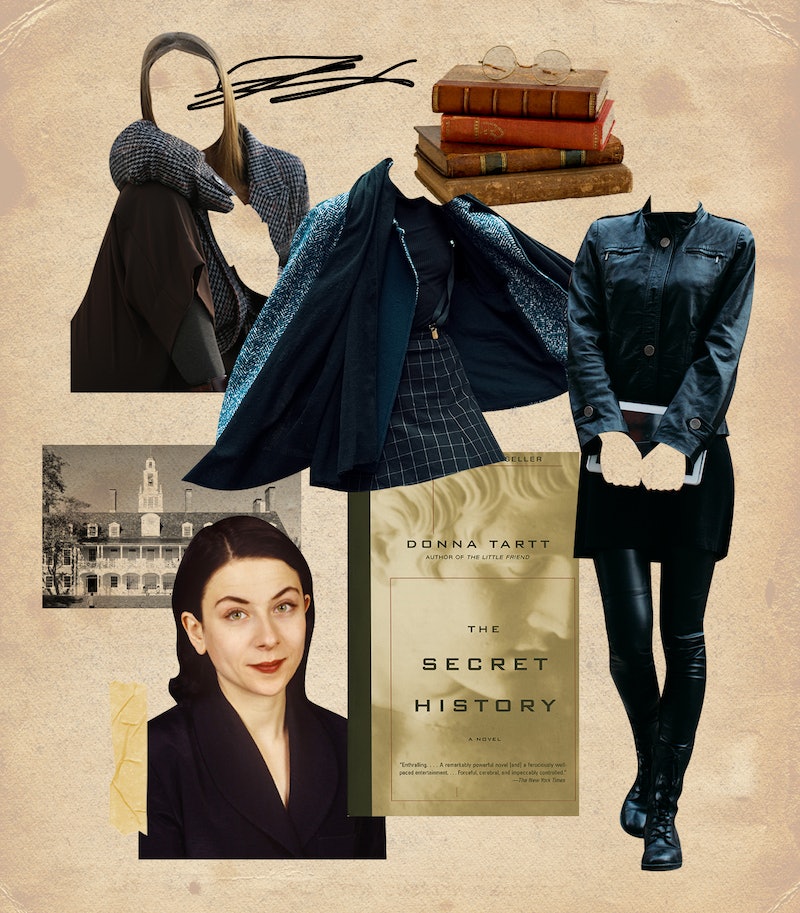 While many look to TikTok to trend forecast the future, the platform also features a quieter, more erudite subculture squarely focused on the past: Dark Academia. It’s a group made up of young, would-be intellectuals with a keen interest in reading, writing, and maintaining an aesthetic plucked from The Talented Mr. Ripley. But their true bible? Donna Tartt’s The Secret History, the 1992 novel centered on a murderous group of Classics students. “How wild and how great that The Secret History, which came out almost 30 years ago, is the hot new book all over again,” says author Lili Anolik, whose weekly podcast Once Upon a Time… at Bennington College charts Tartt’s time at the Vermont liberal arts school in the mid-80s. “It’s funny to see how these things go in cycles,” she says of the book’s renewed popularity.

While Tartt is featured in the 14-part podcast, which launched in September, Anolik aims to examine the cultural significance of the Bennington Class of ‘86 at large. In doing so, she also turns her lens on Jonathan Lethem (Motherless Brooklyn) and Bret Easton Ellis (Less Than Zero), Tartt’s classmates and literary juggernauts in their own right. (Lethem and Easton Ellis are both featured in the podcast, whereas Tartt declined to participate, and her agents have since requested that Apple take episodes down.) Together, their interwoven stories paint the college as a Dark Academian’s most gilded, gothic fantasy: a haven for like-minded thinkers to study the Classics, write with abandon, and party in bacchanalian fashion.

Though Lethem and Easton Ellis have also written about their Bennington days, it’s Tartt’s depiction that has had the most lasting legacy. For Anolik, the reason why is simple. Tartt, herself, is a Dark Academia-obsessive: an outsider, who came to Bennington wide-eyed and clawed her way into its inner circle. “[She was a] shy, quiet girl from small-town, down-at-heel Mississippi, [who] became not just one of the best writers of her generation, but the most beguiling,” says Anolik, who is in the process of adapting the podcast into a book for Scribner. “She transformed herself into a style icon. In other words, Donna didn’t just write The Secret History, she lived it.”

Below, Anolik reflects on her favorite old money aesthetic TikToks, Mad Men, and why she thinks objectivity is bullsh*t.

How aware were you of TikTok’s newfound fascination with Dark Academia as you were working on the podcast, and why do you think it’s resonating now?

I had to be told about it. Dark Academia was a phenomenon before COVID, but once lockdown happened, it truly blossomed. Which is, I guess, predictable: the doors of schools across the nation are bolted shut, so naturally schools become fetishized, glamorized. The nature of desire! Now we can’t get enough of tweed jackets and dusty books. I think there’s something else at play here, though. In countless ways, now is better than then, particularly if you’re other than white, heterosexual, cisgender. But a few things have been lost. There was a flair and freedom in the bad old days of the 1980s. Look, we live in a time of well-meaning repressions. Social media makes us feel perpetually watched, judged. You don’t want to write or say the wrong thing or you’ll be sorry. So, the way it used to be — and when I say “used to be” I mean throughout human history — was that you looked to the future for greater liberality. Like, if you were gay in the ’50s, you might think, “If I were born 30, 40 years later, I could live openly.” Or if you were a girl in the ’50s, you might think, “If this were the 21st century, I could have premarital sex and not be treated like the town tramp.” But now the past is where we see license. The past is where we feel we can express our dark truths. Like, “If only I were at Bennington in 1982, then I could be who I really am.”

What are some of your favorite TikToks on the subject that you’ve encountered?

Sometimes the Dark Academians seem to like school too much. But I like @dariniki.x's sense of humor. And the old-money aesthetic kids are wild. These are but a few of my favorites: @thatoldmoneyobsessedgirl, @norrskenets, @drinkswithdevin, and @theluxurymansions.

Given Gen Z’s newfound interest in this topic, have you found a younger audience listening to the podcast?

I see Once Upon a Time… at Bennington College as Mad Men for Generation Podcast. I think that’s why Lena Dunham — and people younger than Lena — are effusing about it on Instagram and Twitter. Millennials and Gen Zers are listening to it and going, “Holy sh*t, I can’t believe how much fun my parents were having. All that sex, all those drugs!” And if they’re aspiring writers, they’re going, “Can you believe how culturally central the novel used to be? A young literary writer could be interviewed by Bryant Gumble for seven minutes on Good Morning America, could be a staple of the gossip columns, could be as famous as a movie star or rock star.” I’d imagine that Bennington in the ’80s looks to them almost like science fiction.

The New Republic recently published a feature contrasting your icy relationship with Donna to the viral New York Times story, “Who Is The Bad Art Friend?” which explored the politics surrounding who is allowed to whose stories. What did you make of the comparison?

Look, [unlike in that story] Donna's a public figure. She might be ambivalent about fame, but she is extremely adept at being famous. This persona she's created is highly cultivated. She was on the Vanity Fair International Best-Dressed List in 2014, the same year she won the Pulitzer. This is someone who has designed herself to be looked at.

I've also been at this project for a very long time and you cannot imagine the things people have told me, lots of things I did not include. To me, what was [fair to include] had to do with the creation of The Secret History and the creation of her persona.

Donna isn’t the first famous literary figure you’ve explored in your work. Your last book, Eve’s Hollywood, was a biography of Eve Babitz. You’ve said that you can’t be objective about your subjects, but you can be sharply subjective. What does that mean to you?

Objectivity is, to me, a pose. Why would I be moved to spend five years of my life on Bret Easton Ellis, Donna Tartt, and Jonathan Lethem if I wasn’t passionately responsive to their work or to who they are in the world? Passion is, in my opinion, essential to writing a book or making a podcast. But just because I’m passionate doesn’t mean I can’t be cold-eyed. I view my subjectivity as a form of hyper-objectivity, as reconstructed objectivity, as objectivity through the admission of the inevitability of subjectivity.

This podcast started off as an oral history. Your book on Eve began as an article for Vanity Fair. How do you exorcise these figures after spending so much time with them?

Well, it's like falling in love for me. It's deep and it's weird and it's obsessive. I don't know if it ever gets exorcized, totally.

More like this
Jessica Simpson On The Time She Was Pursued By A Backstreet Boy & An *NSYNC Member
By The Editors
Netflix Shut Down 'Bridgerton' S3 Rumours About A “Very Dark” Storyline
By Bustle
We’ve Entered The Hot Boy Reader Era
By Samantha Leach
11 Super Bowl Instagram Captions To Use On Game Day — Even If You Don’t Like Sports
By Alexis Morillo
Get Even More From Bustle — Sign Up For The Newsletter
From hair trends to relationship advice, our daily newsletter has everything you need to sound like a person who’s on TikTok, even if you aren’t.