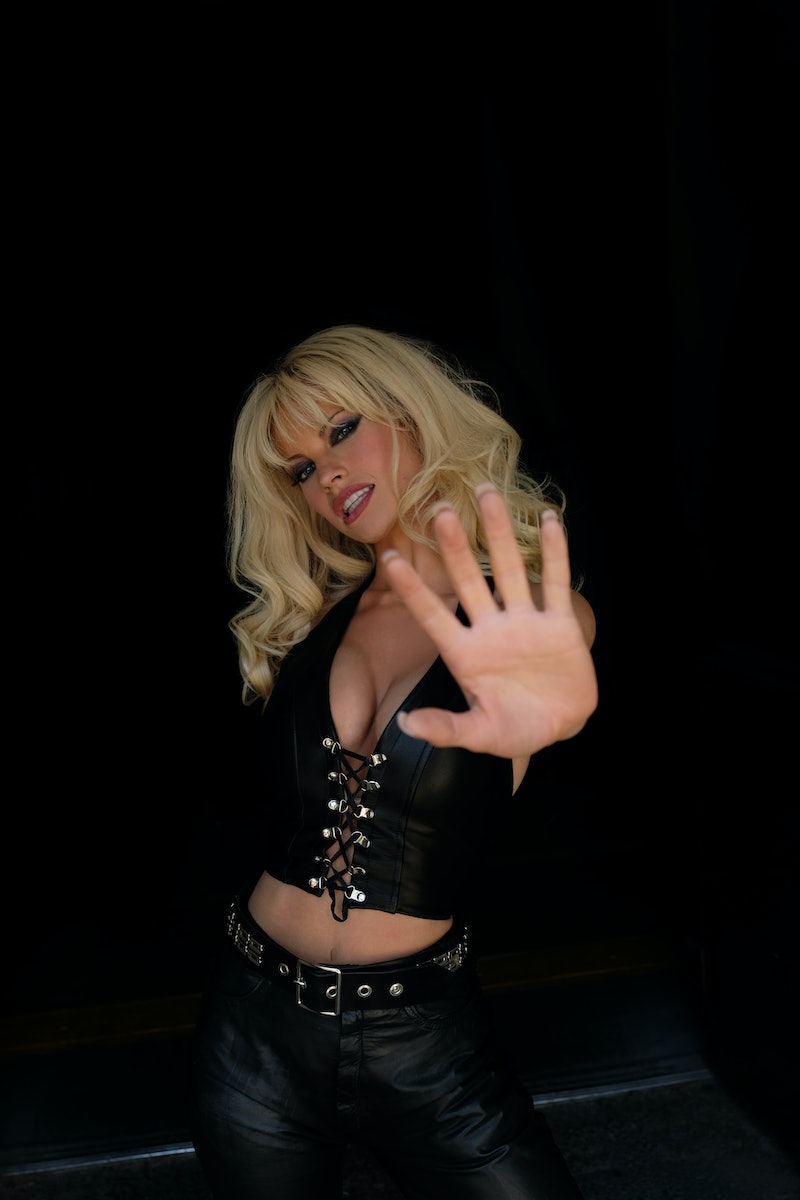 Courtesy of Hulu
By Stephanie Topacio Long
May 8, 2021

The first photos from Hulu’s upcoming limited series Pam & Tommy introduced Lily James and Sebastian Stan as Pamela Anderson and Tommy Lee to the world, and the resemblance between the actors and their real-life inspirations is good. Shockingly good, in fact. Each half of the duo bears an uncanny likeness to their counterpart, who together formed one of the most infamous couples of the ’90s after they gained fame as a Playboy centerfold and Mötley Crüe’s drummer, respectively. However, it’s James as Anderson that has left people on Twitter in complete disbelief.

In the new Pam & Tommy photos, James and Stan capture the couple’s bold IDGAF attitudes. One shows the two together, both covered in ink, while James’ Anderson has one of her love’s nipple rings between her teeth. The other shows her alone, offering a better look at how she pulls off the blonde bombshell vibe in her sultry makeup, leather pants, and lace-up bustier. In the comments of the Hulu account’s post showing the actors, numerous people expressed their disbelief that they were looking at James instead of Anderson. One wrote, “I’m shocked. Howwww can this be Lily James?! This is some amazing makeup artist work.” Another added, “Lily looks EXACTLY like Pam Anderson. It’s wild.”

On Twitter, the shock was just as rampant. People gushed about the incredible transformation of the limited series’ leads, especially the Rebecca star. “Anyone else incapable of getting their head around Lily James as Pam???? How is it her like I just don’t get it at all,” wrote one user.

A lot of fans made sure to applaud the hard work of the hair and makeup artists behind the transformation. They’re ready to give them all the awards now.

Even though James’ transformation caused a particularly large stir, Stan’s new resemblance to Lee did not go unappreciated, either.

As Anderson and Lee, James and Stan will deal with one of the now-exes’ biggest scandals: their notorious homemade sex tape. Hulu’s description calls the show “a comedic limited series on the true story behind the release of the first ever viral video in history — the sex tape of Pamela Anderson and Tommy Lee.” The two filmed said tape after their 1995 wedding, per Rolling Stone, and it went on to live in infamy after a disgruntled contractor stole the safe where they kept it in their home. Within months, word of the tape’s existence was out, and it ultimately hit the internet. Given the two stars’ highly publicized relationship and unconventional public personas, it was the subject of much curiosity, many headlines, and even legal action.

In addition to James and Stan, the cast features other big names. They’re joined by Seth Rogen, Nick Offerman, Taylor Schilling, Andrew Dice Clay, Pepi Sonuga, Spencer Granese, and Mozhan Marnò. The miniseries’ release date has not yet been announced, but based on these first photos, fans seem interested in seeing more of the lead actors as their famous characters as soon as possible.