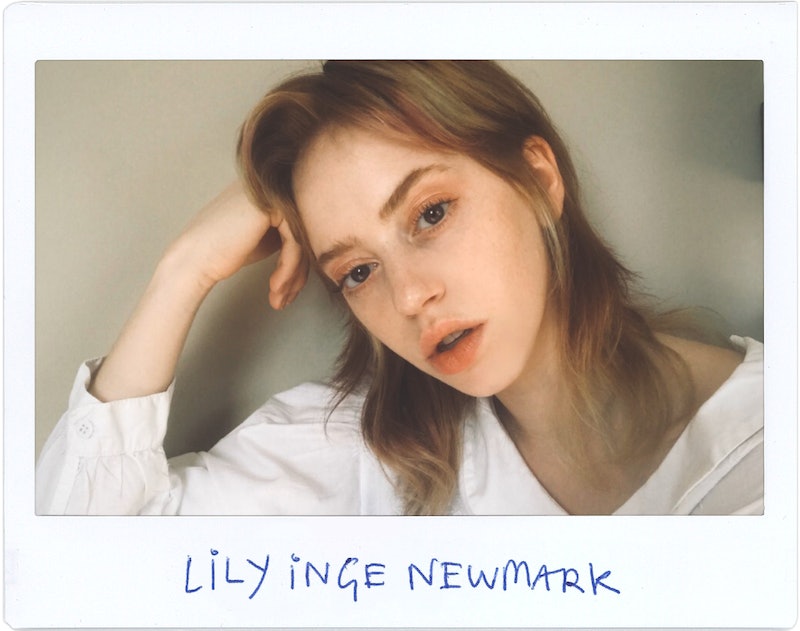 When celebrities (virtually) hang out with Bustle writers, we want to give them the chance to leave their mark. Literally. So we hand them a pen, a piece of paper, a few questions, and ask them to get creative. This time, Cursed and Sex Education star Lily Newmark is leaving her mark in the Bustle Booth.

“I’m a big fan of dressing up, the costume department is definitely my favourite,” muses Lily Newmark. The breakout actor who starred in Temple and Sex Education is about to take on the role of Pym in an adaptation of the fantasy graphic novel Cursed. Pym is the comedic, protective best friend of lead character Nimue (played by Katherine Langford), in the female-led retelling of King Arthur. It's Newmark as you’ve never seen her before.

Like any fantasy series, the characters in Cursed are mystical and magical, something which Newmark says she's drawn to. However, her dream role may surprise you. “I want to play Smeagol / Gollum [ of Lord of the Rings]; I would really like to play a creature,” says Newmark. “I’d love to immerse myself in a huge physical change. I don’t want to play something or someone that people have seen a million times before. It’s interesting to push yourself.”

Her Cursed character of Pym is worlds away from Newmark's role in Sex Education. She plays Ruthie, first introduced in series one when she turns to Otis' 'sex clinic' to guide her relationship with her girlfriend. “Sex Education felt like a passion project for everyone, in that everyone put all their energy into the story in a way that you don’t always get,” says Newmark. “I like how ruthless Ruthie is. I love playing a strong female, queer character, who isn’t going to sit by and take advice from a young, heterosexual boy.”

The powerful energy that Newmark brings to the character of Ruthie is what's gained her a serious following on social media – 58.9k followers and counting at the time of writing. She uses her platform to share causes that are important to her. “I’ve been thinking about this a lot over the last few months, during COVID-19, and I think I’d want to go into sustainability and conservation work if I wasn’t an actor. That’s where my heart is,” she tells Bustle.

Watch Newmark in Cursed on Netflix from July 17.