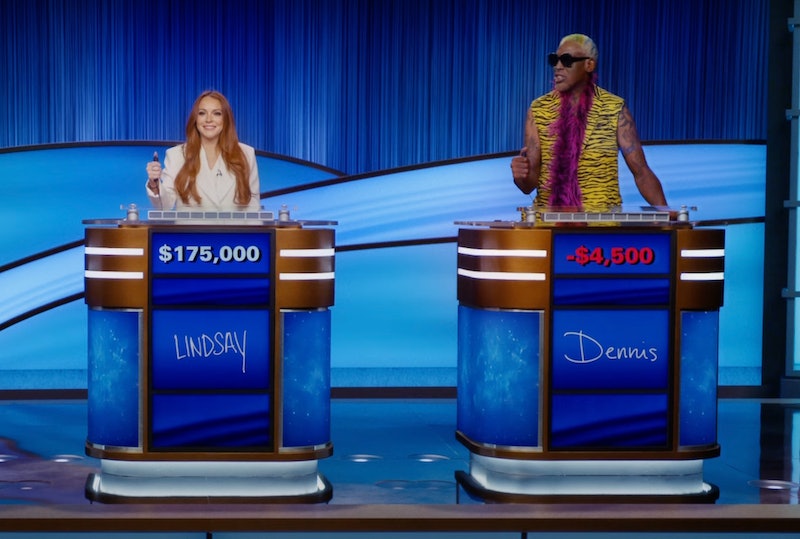 In between plays and the star-studded halftime show at the 2022 Super Bowl, viewers will be treated to commercials that are actually worth sticking around for, and some of those ads have already started rolling out. One new commercial starring Lindsay Lohan shows her return to the small screen to promote a gym, while simultaneously poking fun at her highly publicized past.

In the 30-second spot for Planet Fitness, the Mean Girls star is depicted as a celebrity who has turned her life around. She’s working out regularly, sleeping through the night, and even bedazzling ankle monitors on other people. She’s seemingly having a good time as the commercial’s famous narrator, William Shatner, references her past troubles in a playful way.

The ad focuses on Lohan, but she’s not the only celebrity in it. Aside from Shatner’s narration and appearance, former NBA player Dennis Rodman and actor Danny Trejo make cameos.

“It was an opportunity for me to really put all the little things that happened in the past to bed,” the 35-year-old entertainer told Glamour, making it clear that she enjoyed filming the commercial. “It was a really light-hearted, fun way of doing it.” She also said that she’s “comfortable poking fun at the past and leaving it there,” suggesting that she’s done talking about her legal issues.

The Planet Fitness spot references several things that no longer seem to negatively affect Lohan’s life. There’s a shot of paparazzo crying outside of a club in the middle of the night, sad that one of his favorite tabloid targets is no longer around for him (“I miss Lindsay!”). She’s also winning at Jeopardy! and “trading DUIs for DIYs.” Lohan has been arrested several times for driving under the influence and possession of illegal substances, but this commercial reminds viewers that this is all in her past and that the Confessions of a Teenage Drama Queen star is completely over it.

Lohan’s ad is one of several commercials that have been unveiled before they air during the Super Bowl on Feb. 13. Paul Rudd and Seth Rogen teamed up to promote Lay’s.

Meanwhile, Uber Eats has an ad out now that stars Trevor Noah, Jennifer Coolidge, and Gwyneth Paltrow taking a bite out of her own vagina-scented candle. Bud Light recruited Guy Fieri, and BMW hired Arnold Schwarzenegger to portray Zeus.