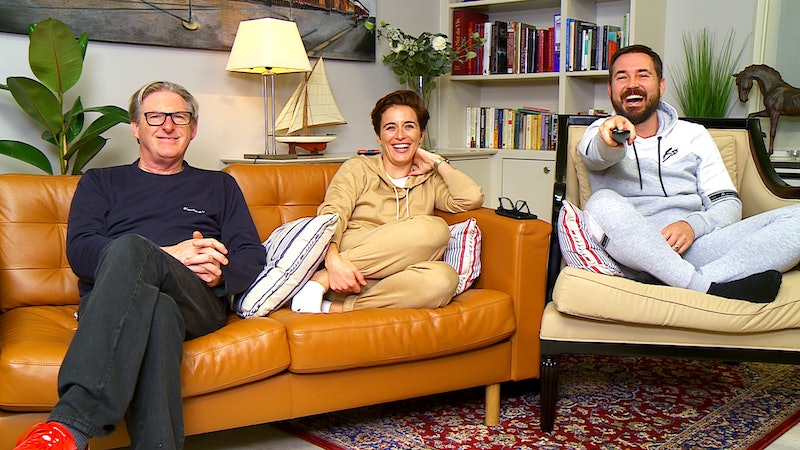 Like many other TV shows, Line Of Duty has faced a number of setback this year. Filming stopped and started as the pandemic unfolded, and though finally back filming the sixth series of the hit BBC crime drama, AC12's finest will take a break from chasing bent coppers once more, in the name of charity. Yes, the Line Of Duty cast will join the cast of Celebrity Gogglebox for Stand Up To Cancer on Oct. 23.

Line Of Duty's Adrian Dunbar, Vicky McClure, and Martin Compston – aka. Ted Hastings, Kate Fleming, and Steve Arnott, respectively – will feature on the one-off special to help raise money for Cancer Research UK’s Stand Up To Cancer campaign. They'll join the likes of comedian Mo Gilligan and Craig David to pass hilarious judgement on a range of TV shows from the comfort of their sofas.

Channel 4 announced the exciting news via the Gogglebox Twitter page on Oct. 21. Gogglebox will certainly make a nice change of pace for the actors who have recently resumed filming new episodes of Line Of Duty after the pandemic caused delays.

Adrian Dunbar commented to Channel 4: “It’s an honour to be part of the esteemed Gogglebox line up especially when it’s raising money for the phenomenal work Stand Up To Cancer do. Being able to watch a load of great – and some questionable – TV alongside Vicky and Martin is an added bonus.”

Vicky McClure added:"I am a big fan of Gogglebox, really chuffed to be asked, and quite surreal, to be part of the Stand Up To Cancer special with Adrian and Martin. We hope we can help raise much-needed funds for such an amazing cause.”

Past Celebrity Gogglebox episodes have included the likes of Naomi Campbell, Noel Gallagher, and Steve Pemberton, all of whom offered hilarious off-the-cuff remarks and quick-witted commentary, as per the show's premise.

Celebrity Gogglebox follows the epic 16th series of the beloved reality program which aired back in September. It was recently revealed that Britain's favourite couch potatoes/TV critics do get paid for their efforts. Bustle reported back in September that the Gogglebox families are awarded a monthly allowance of around £1,500, and the amount is thought to be split amongst each family member at their own discretion. Anyone fancy signing up?

More like this
'I'm A Celebrity' Just Made A *Major* Announcement
By Sam Ramsden
There’s A Brand New Drag Race Spin-Off & It’s Dropping Very Soon
By Sam Ramsden
Ekin-Su & Davide’s ITV Travel Show Finally Has A Name
By El Hunt and Sophie McEvoy
What Exactly Is The Bish & Chips Show?
By Frances Stewart
Get The Very Best Of Bustle/UK