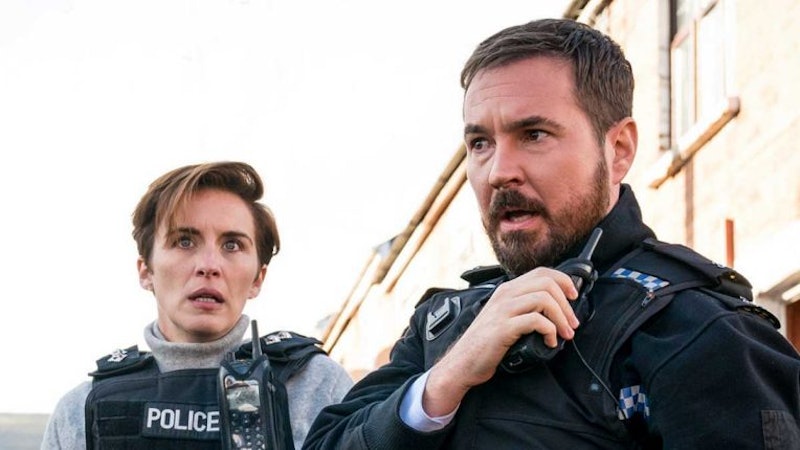 Christmas is the season of goodwill, and fans of Line of Duty will be excited to hear that a brand new batch of episodes may be on the way. According to a report from The Sun, the show will return for a three-part special sometime in 2023. “There’s a strong feeling that there was unfinished business,” a source told the newspaper. “Viewers weren’t satisfied with the ending of series six and were crying out for a more sensational conclusion – now Jed [Mercurio] can deliver that.” Bustle has reached out to the BBC who has declined to comment.

When viewers last said goodbye to the AC-12 team, the identity of H was revealed to have been corrupt cop Ian Buckells, played by Nigel Boyle – much to the disappointment of some viewers. But now, there’s potential that Mecurio could deliver one hell of a twist next year, potentially as part of the Christmas television line-up. “The question is whether the person we were led to believe was H is the villain that AC-12 has been hunting for or if it was another nemesis,” The Sun’s source said. “There’s also a theory another, darker puppet-master is at work” due to the smaller batch of episodes rather than six or seven.

While creator Jed Mercurio has previously said he had “no plans” for Line of Duty to make a comeback, Adrian Dunbar – who plays Superintendent Ted Hastings – hinted that “two 90 minute” episodes were in the works during an interview with Radio Times. “We’d love to do it again. I’m really hoping something might happen next year,” he said in August. Vicky McClure (DI Kate Fleming) recently shared during an appearance on Good Morning Britain that she also hoped for a return in the near future. “I speak to the lads all the time and we’d love to, we’re all game,” she said.

More like this
Everything To Know About The 'Daisy Jones & The Six' TV Series
By Maxine Harrison and Brad Witter
UK Viewers Will Be Able To Enjoy 'The Last Of Us', But There’s A Catch
By Sophie McEvoy
These 5 Words In 'The Last Of Us' Ep 2 Have A *Major* Impact In The Future
By Sophie McEvoy
This Dark 'Happy Valley' Theory Is Staring You Right In The Face
By Sophie McEvoy
Get The Very Best Of Bustle/UK
Sign up for Bustle UK's twice-weekly newsletter, featuring the latest must-watch TV, moving personal stories, and expert advice on the hottest viral buys.