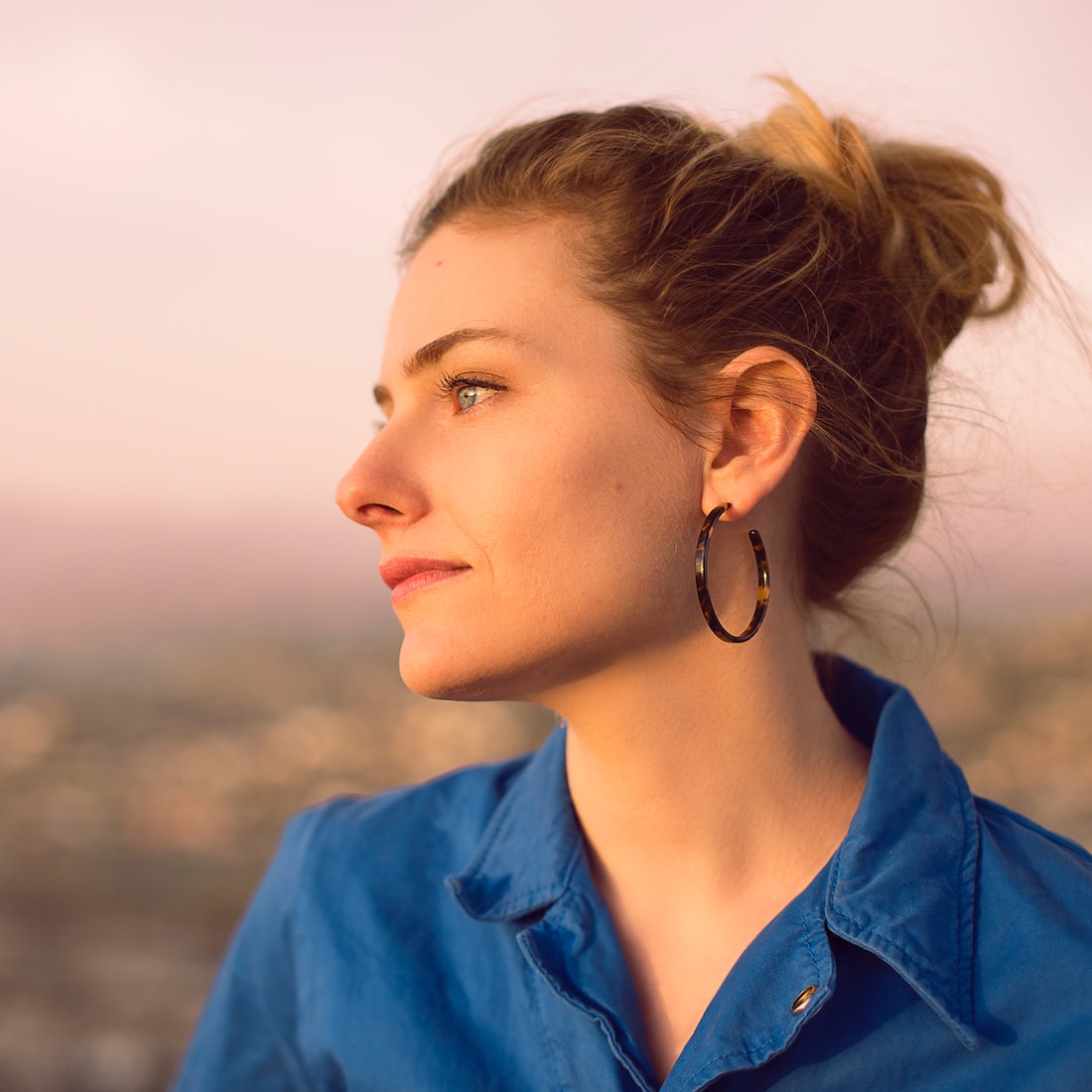 To peruse Lisa Hanawalt’s work is to dive into a strange, technicolor universe teeming with anthropomorphic creatures. The BoJack Horseman production designer and Tuca & Bertie creator delights in crafting animals who walk on two legs and act just like people — until they get a hairball or lay an egg. But if Hanawalt’s art is a glimpse into her mind, what other brilliant nonsense would you find there? A parade of bird-women and horse-men? A dance party for good-natured sex bugs?

Not exactly. It’s more “like a haunted carnival,” Hanawalt tells Bustle. “It's a mess in there. [My mind] doesn't shut off, so I should probably try meditation for the 200th time.” A pencil-skirted girlboss would definitely try meditation, but Hanawalt, God bless her, has never professed to be such a thing. Lisa Hanawalt is an anxious mess, and she’s running her own Adult Swim show — though she admits being in charge is “mortifying.”

In meetings, particularly virtual ones, “I have to shut off a part of my brain that hyper analyzes every little thing I said, whether it was funny, or interesting, or embarrassing, or horrible.” And then there are the endless decisions that fall to her: “I mean, it's just like, ‘Oh, is this burp sound the right burp sound?’ It gets very granular, very quickly,” she sighs. Some days, “it's just like, ‘Ah, this is impossible. I guess we just have to cancel the whole show. It's not going to work.’” Natural, self-assured leaders might think Hanawalt is just being dramatic, or humble, or farcical. “Fake it til you make it,” they would say, assuring that on the other side — of success, of wealth, of power — lies a land of confidence and manspreading. But plenty more will deeply understand what it means to be “very cautious at all times of what space I'm taking up and constantly kind of wish I could disappear.”

It certainly hasn’t precluded her from doing what she does best. On top of publishing three monographs and a graphic novel, and her work on BoJack, she dreamt up a show — Tuca & Bertie — that won over enough fans and acclaim to get picked up by Adult Swim for Season 2 after Netflix axed it. Even getting an adult animated series off the ground as a woman showrunner is a Herculean feat; Hanawalt is the first woman to run one at Adult Swim, a network that’s long been criticized for its misogyny. (Hanawalt herself has said as much in the past, but now, “they are changing things, so I'm happy to be part of that change.”)

But without all that worrying, she couldn’t have made Tuca & Bertie. The show’s madcap plots are grounded in the protagonists’ emotional distress: for life-of-the-party Tuca (Tiffany Haddish), a nagging loneliness; for dreamy introvert Bertie (Ali Wong), generalized anxiety. Not every event is transposed from Hanawalt’s lived experience, but it’s a starting point. “When we get to the writers room, I put it all out on the table,” she says. The other writers help her tease it out, sometimes adding in sprinklings of their own personal stories, “and we mix it all together into a delicious goop.”

It’s always been this way for Hanawalt. She started drawing in grade school to quiet her mind and help her listen to the teacher. Even then, her sketches were almost always animals, and often anthropomorphized ones. “I drew myself as a cat version of Weird Al Yankovic because that, to me, was the coolest thing you could possibly be,” she says. As she got older, the sketches became cartoons — at first self-published in zines, and then actually published in magazines like Lucky Peach and, later, specialty press Drawn & Quarterly. Often, they reveled in body humor. Always, they were semi-autobiographical — save, perhaps, for her work on BoJack, for which she created the visuals (showrunner Raphael Bob-Waksberg, Hanawalt’s childhood friend, was in charge of the stories). Tuca & Bertie was her chance to do it her way, and despite the copious credit she extends to her writing staff, Hanawalt seeps into every frame of the show. She’s the goop.

“It's scary, I mean, but it's the best I could do to just kind of take my personal experience and barf it up for other people to be entertained by,” she says. “I mean, it's kind of what I've been doing my entire life. I don't know if it's great or pathological, but it's just something I do.” So when something big happens — say, Hanawalt flies to New Orleans for a bachelorette party and ends up getting mugged at gunpoint — chances are, it’ll make it into the show. See Season 2, Episode 2 of Tuca & Bertie, in which the eponymous bird duo is robbed by a firearm-wielding tree. In real life, Hanawalt didn’t make like Bertie and beat the guy up, but she did manage to keep her sketchbook, telling the perpetrator he didn’t need it. “It was kind of a weird thing of me to say while the gun was pointed at me, but I don't know, in the moment I was just like, ‘I don't want to give this up. I just did all these nice sketches in here. What does he need this for?’ I do strange things under pressure, I guess.”

She surrounds herself with people she likes, and with plenty of animals, like her dog Annie and her Norwegian Fjord horse Juniper, whom she bought in 2018, fulfilling a lifelong dream. The horse in particular has helped. With Juni, “I go to the barn five times a week and have at least an hour where I'm just not tuned into the internet or clicking on things and not thinking.”