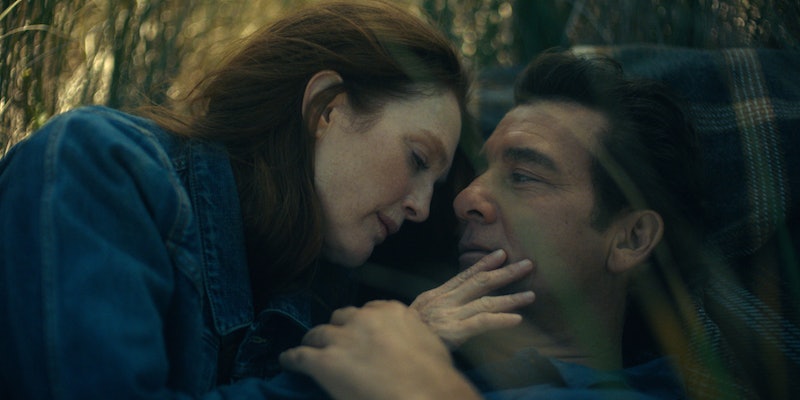 Stephen King’s 2006 book, Lisey’s Story, is a powerful meditation on marriage and grief. Set two years after novelist Scott Landon’s death, the story follows his still-grieving wife of 25 years, Lisey, as she attempts to pack up his office — while also unpacking her memories of the tortured man she loved. It isn’t revealed how Scott died in until the very end of the novel — and with an all-new adaptation now streaming on AppleTV+, readers will be racking their brains to recall the details. But don’t worry, you won’t have to reread Lisey’s Story before you watch the limited series: we’ve got all the important details for you below. Major spoilers for Lisey’s Story follow.

Lisey’s Story opens two years after Scott Landon’s death, but the real story begins decades earlier, when Scott, his older brother Paul, and their father discovered Boo’ya Moon — a magical world where “things... that are nice in daylight turn to poison at night.” Many nightmarish things call Boo’ya Moon home — like the laughers and the long boy — but this other world is also home to an enchanted pool, which serves as place of deep healing and creativity. The pool is where Scott once took his brother to recover from injuries inflicted by the boys’ abusive father, and it’s where he purports to get his book ideas from.

Much of Scott and Lisey’s story revolves around two of Scott’s public readings: one in Nashville, Tennessee in 1988, and the other in Bowling Green, Kentucky in 2004. In 1988, Lisey saved her husband from a deranged fan by clubbing the man over the head with a shovel, but not before he managed to shoot and gravely wound Scott. In spite of his wife’s heroics, when Scott leaves for the 2004 event in Bowling Green, he does not take Lisey along with him — a decision she struggles to understand in the wake of his death.

Instead, Lisey learns over the phone that her husband has collapsed and been rushed to the hospital. “I think it would be wise if you left as soon as you give permission for the surgery,” the man on the other end of the line tells her, and Lisey follows his advice. She doesn’t realize how dire her husband’s situation truly is until she arrives at Bowling Green, however.

Much to Lisey’s surprise, she finds that Scott has been isolated “in the closest thing their small community hospital has to a plague unit.” Given the condition of Scott’s lungs, the doctors suspect he has contracted a rare and deadly strain of flu, but Lisey wasn’t even aware that her husband was ill. She later learns the truth — that Scott contracted a mystery illness during his time in Boo’ya Moon. From the novel:

“Had his death been on a flower that he had picked up and smelled, or a bug that had slipped its sipper under his skin as the sun went down red in its house of thunder? Did he get it on a quick visit to Boo’ya Moon a week or a month before his final reading in Kentucky, or had it been waiting for decades, ticking like a clock? It might have been in a single grain of dirt that got under one fingernail.... Just a single bad bug that lay asleep as the years passed, finally waking up at his computer one day when a reluctant word finally came to him and he snapped his fingers in satisfaction. Maybe — terrible thought, but who knew? — she had even brought it back herself from one of her own visits, a lethal mite in a tiny dot of pollen he had kissed from the tip of her nose.”

With his dying breaths, Scott tells Lisey that he tried to heal himself in Boo’ya Moon, but couldn’t. Not only had the long boy — a massive, eldritch horror that haunts its victims — blocked his path to the pool, but Scott had also been desperate enough to try eating some berries instead — berries that may have helped him in the daylight, but proved deadly after sundown. Although he drank some dew, which allowed him to get through most of his reading with few noticeable symptoms, Scott ultimately succumbed to some strange illness out of Boo’ya Moon.

It’s only in this moment — when Lisey can recall the details of her husband’s last moments without breaking down into sobs — that she knows she has come far enough along in her grieving process to handle to packing up Scott’s office and moving on.