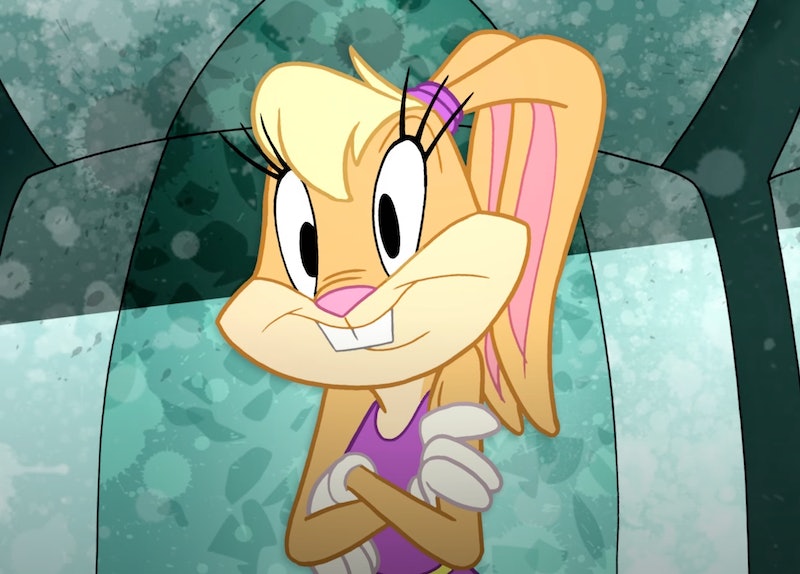 Even before audiences had a chance to see the new, “improved” Lola Bunny in Space Jam: A New Legacy, the internet had a lot of depressing thoughts about her desexualized figure. She’s basically an animated Britney Spears at this point: Everyone’s weighing in, and most of it’s disparaging.

But the problem with the new Lola isn’t her redesign. The real issue is that she’s... boring. New Lola — voiced by Zendaya, who does an admirable job with what she’s given — is a talented, Wonder Woman-trained athlete, who spends most of the movie in a supporting role to the other (mainly male) characters. But no one should lose sleep over this missed opportunity for our floppy-eared heroine: We’ve already gotten our perfect Lola Bunny, and she’s voiced by Kristen Wiig. In the 2010s The Looney Tunes Show, Wiig played the girl bunny as the psychopathic sweetie with no sense and a big heart. She’s magnificent. She’s the Lola we deserve. And you probably don’t remember her.

Lola’s actually been through multiple redesigns over her animated life with Warner Bros. She was first introduced in the 1996 Space Jam movie as Bugs Bunny’s “female merchandising counterpart” and romantic interest. As such, she was drawn much like Who Framed Roger Rabbit’s Jessica Rabbit, but like, an actual rabbit. (Datingroo found that Space Jam’s Lola was the animated character people were most sexually attracted to... which is a thing I wish I didn’t know but now lives in my brain forever.) Still, lots of women, myself included, held her up as a paragon of sporty empowerment. We basically retconned Lola — a character with only a few lines, who ends up needing to be saved by a man — into our bunny hero.

The 2011 TV reboot The Looney Tunes Show seemed to understand this. The creators gave us a new, fully realized Lola, who bore no relation to her Space Jam counterpart (in a sign of things to come, some hated the adaptation and the lead character designer faced a wave of complaints). She was at home among The Looney Tunes Show’s reimagined cartoons — voiced by the likes of Fred Armisen and Annie Mumolo, in addition to Wiig — who acted out silly sight gags for kids, while also throwing in jokes for adults.

In Wiig’s award-winning performance, Lola is... kind of annoying, actually. She can never remember which allergy(ies) she has. She gets into an accident a minute. She always has to pee. She’s obsessed with Bugs Bunny — Bugs has to take out a restraining order against her, and the song about it is super-catchy!

But fans don’t change their minds about beloved characters easily. Despite decent ratings, The Looney Tunes Show was canceled after only two seasons — and in 2015, New Looney Tunes debuted with a distinctly vintage feel. The new show also brought back Lola’s voice actor from the original Space Jam, Kath Soucie — meaning Wiig’s little time capsule of perfection isn’t as well-remembered as the “traditional” Lola, which is a shame. Say what you want about bubbly stalker Lola, but at least she wasn’t boring.

Now that the Lola Bunny debate is raging once again, with fans arguing that character “should stay a sex symbol,” or that “There’s nothing wrong with having big boobs, anyways,” or even “Zendaya’s not the right fit for a cartoon bunny, somehow,” I suggest we focus less on the Space Jam: A New Legacy version. Simply subtracting Lola Bunny’s sexiness doesn’t leave her with much — give her a kooky backstory and a personality for days, and no one will ever talk about her boobs again.