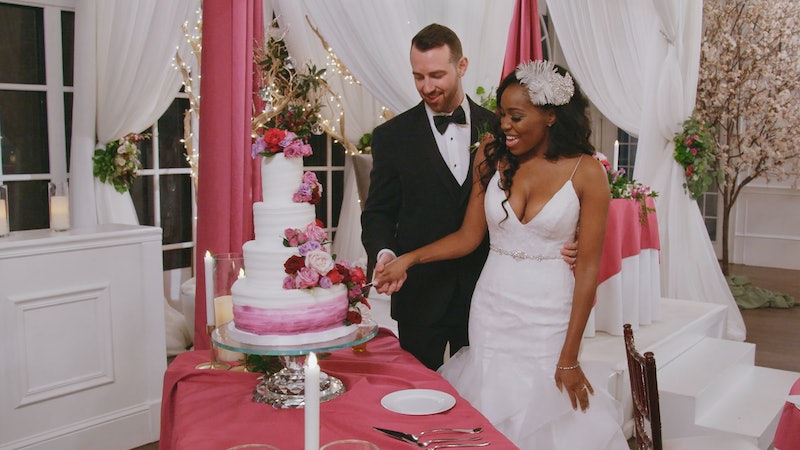 Lauren and Cameron are one of two couples who actually got married on Netflix's Love Is Blind, and viewers will be happy to know that a year and a half later, the fan-favorite pair is still together.

Though the couple had one of the strongest relationships on the show, it wasn't without its speed bumps. Lauren (understandably) had some trepidation before saying "I do" so soon after meeting Cameron. "I actually had to kind of step back for a second because I felt like I was gonna have a nervous breakdown because it's already a lot of pressure to plan a wedding in the first place," she tells Bustle. "At times, it was just kind of overwhelming and I was like, 'I don't know if I can do this.'"

After their final date before the big day, however, Lauren was ready to take the plunge. "I was just like, I can absolutely not lose this man. I've never been this happy," she reflects. "I've been so unhappy with so much of my dating life in the past. I'm not gonna bring that into this possibly life-changing, beautiful man standing here loving me and telling me that he's ready to get married. Like, why would I deny myself that complete happiness?"

Now, their relationship is growing more every day, and they're enjoying raising their dog Sparx together until they're ready to have children. "It's kind of crazy because it's like we did it backwards. You know, we got married, and then it's kind of like we started dating each other, as crazy as that sounds," Lauren says. "Every day is an adventure for us."

Cameron says that their relationship isn't "100% euphoria" all the time, but that the foundation of trust and communication they built on the show allows them to "push through those difficult times and challenges that married couples face." One of those challenges facing Cameron and Lauren has been feeling pushed to expand their family. Cameron told Essence, “People every day pressure us about having a baby. ‘When are we going to have a baby?’ That sort of thing. It’s unfortunate because I know other couples are met when that same sort of pressure and there’s couples out there that can’t get pregnant or don’t want to. We’ve talked about wanting to have kids on our own timeline.”

As for what's next, Cameron says he would love to continue working with Lauren, who is a producer and content creator. The happily wedded pair released a book in June titled Leap of Faith: Finding Love the Modern Way about their relationship and also impart love advice. "We were going through this process of the show, and I just love being able to work with her every day," he says. "So hopefully, we get to continue that trend."

Come July 28, Cameron and Lauren will continue to build upon their success with the Love Is Blind: After the Altar reunion, which will see them discuss their marriage and possibly having kids.

More like this
Love Is Blind’s Natalie Claims Shayne Signed Up For 'Perfect Match' While They Were “Still Together”
By Brad Witter
Nicole & Chris Hinted They’re Still Together After 'Married At First Sight'
By Brad Witter
The Bachelor’s Christina Mandrell Comes From One Of Country Music’s Most Famous Families
By Brad Witter
A Guide To All Of Zach Shallcross' 'Bachelor' Filming Locations
By Brad Witter
Get Even More From Bustle — Sign Up For The Newsletter
From hair trends to relationship advice, our daily newsletter has everything you need to sound like a person who’s on TikTok, even if you aren’t.