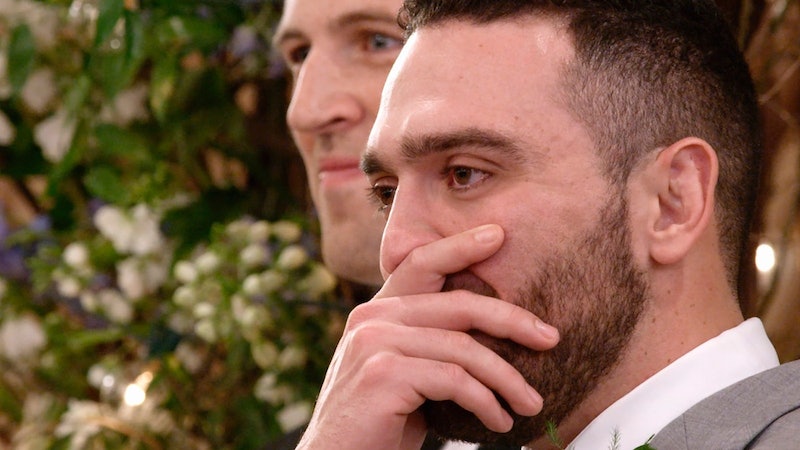 Although Mark Cuevas was infamously left at the altar on Season 1 of Netflix's hit reality show Love Is Blind, the former contestant finally received his happy ending. Love Is Blind star Mark Cuevas is expecting his first child with girlfriend Aubrey Rainey. The new couple announced the news to People on Monday, Oct. 26, revealing that their newborn is due in April 2021.

"We found out together after a weekend spent with friends and family in West Virginia for Labor Day weekend," Mark and Aubrey said. And although she felt "very fatigued" when she first found out she was expecting, Aubrey's pregnancy has been smooth sailing ever since. "No morning sickness at all, thankfully," she said. "Luckily I am starting to get a lot of the normal energy back."

Mark also announced the news on Instagram, which was immediately celebrated by his Love Is Blind castmates. "Yayayayayayyyyy the word is out!!" Amber Pike commented. "Finally!! We're so happy for you guys!!" Damien Powers also responded with his own well wishes: "Congrats to you both brother! You're going to be an incredible dad and I wish all three of you all the love and happiness life has to offer."

During his stint on Love Is Blind, Mark got engaged to now ex-fiancé Jessica Batten before ever seeing each other in person. The show chronicled their journey as a couple, including moving in together and meeting each other's families, leading up to their nuptials. They broke up on the season finalé when Jessica left Mark at the altar, citing their ten-year age difference as a deciding factor. Jessica hasn't yet commented on Mark's big news, but she has also moved on. On July 4, Batten debuted her new boyfriend Benjamin McGrath on Instagram.

Mark and Aubrey first met back in July while she was visiting Atlanta, where Mark resides and where the first season of Love Is Blind was filmed. "We met at a restaurant in Atlanta, kept in contact and started visiting each other frequently," the couple told People. "We took a Fourth of July trip to Savannah, Georgia, where we officially started dating and then never left each other's side since." The pair has since moved in together as they await their upcoming addition.