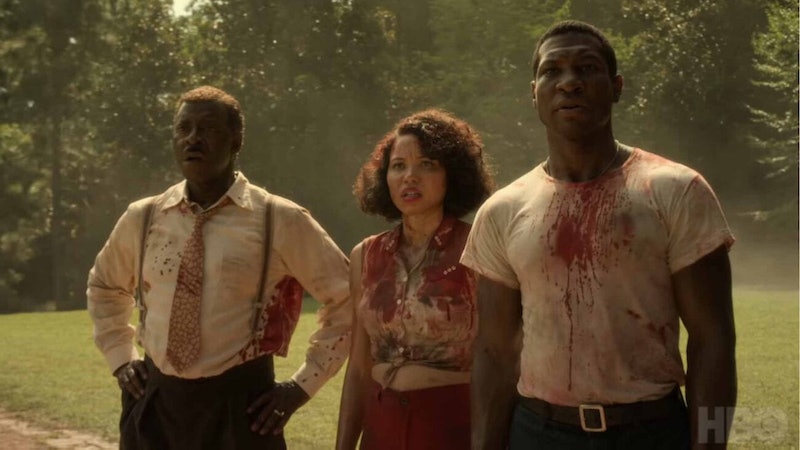 On Aug. 16, HBO viewers will be transported to Lovecraft Country: the new horror series from Misha Green, Jordan Peele, J.J. Abrams, and Warner Bros. If you're not already familiar with the source material, keep reading to find out more about the Lovecraft Country book, author Matt Ruff, and what to expect from the HBO show. Spoilers for Lovecraft Country follow.

Hailed by Charlie Jane Anders as "one of the most thrilling books of [2016]," Lovecraft Country centers on Atticus Turner, a young, Black veteran and native of Chicago's South Side, who must embark on a cross-country road trip after his father, Montrose, is taken to Ardham, Massachusetts by a mysterious white visitor. Accompanying Atticus are his childhood friend, Letitia, who shares his love of all things science fiction, and his uncle George, who publishes The Safe Negro Travel Guide — a fictionalized version of the famous Green Book.

Fans of Jordan Peele's Get Out will be familiar with the book's twist: Montrose has been kidnapped by an all-white religious Order, founded by Titus Braithwhite — a slave-owner who died in the late 18th century. To complete their next ritual, the Order need blood from one of Braithwhite's descendants: Atticus, whose ancestry can be traced back to Titus' rape of an enslaved woman. The Korean War vet and his allies are forced to dodge dark magic and make tentative new alliances in order to rescue Montrose and return home.

Ruff weaves his tale through eight interconnected stories, each of which deals with a familiar horror trope. From haunted houses to ancient artifacts, Lovecraft Country has it all. The set up is remarkably similar to one frequently used by the book's namesake. Howard Phillips Lovecraft's stories formed the basis for the Cthulhu Mythos: a shared collection of fiction that includes a number of recurring characters, icons, and locations. These include Abdul Alhazred, the fictional author of the Necronomicon, and Dr. Henry Armitage, the head librarian of Miskatonic University. The title of Ruff's novel draws from the modern-day term for the New England setting of many Lovecraftian tales.

That's not where the resemblance between the Lovecraft Country book and the real-life Lovecraft stops. H.P. Lovecraft was a virulent racist, a man who held views that were "extremely disturb[ing]" to his contemporaries, according to sci-fi author Jason Sandford. As the New York Times reports, the underlying horror in many of Lovecraft's stories, from "The Horror at Red Hook" to "The Rats in the Walls," isn't vicious creatures of cosmic origin, but the bleeding of Lovecraft's racism and sexism onto the page.

There's no escaping Lovecraft's racism, but that hasn't stopped contemporary writers of color from putting their own spin on his work and its themes. A whole host of writers — including Maurice Broaddus, Silvia Moreno-Garcia, N.K. Jemisin, Nnedi Okorafor, Daniel José Older, and Victor LaValle — have written and spoken about reconciling the "Colour out of Space" author's racism with his legacy in the speculative-fiction community. Although the Cthulhu Mythos was largely built by white, male authors, women writers, and women of color in particular, lead the Lovecraftian market today.

Being aware of this trend, and given the fact that the Lovecraft Country book centers on Black people in Jim Crow America, you might be surprised to learn that Ruff is white. Reviews of the novel draw attention to this fact, but agree that the author handles his Black characters and the racist landscape they inhabit with care. As the L.A. Review of Books observes, "It would be very easy to fall into traps of appropriation, but on balance Ruff avoids these pitfalls more than he stumbles into them."

At its core, Lovecraft Country is subversive. As Tor.com writes, "to not only set a story about Black American life in Cthulhu trappings isn’t just intriguing storytelling but a slap in the face to Lovecraft himself. And in this Black woman’s view, that’s a damn fine thing indeed."

Whether the HBO series will stick to the narrative laid out in Ruff's novel remains to be seen. But with Green and Peele at the helm, HBO's Lovecraft Country is almost guaranteed to be just as subversive as the novel that inspired it.