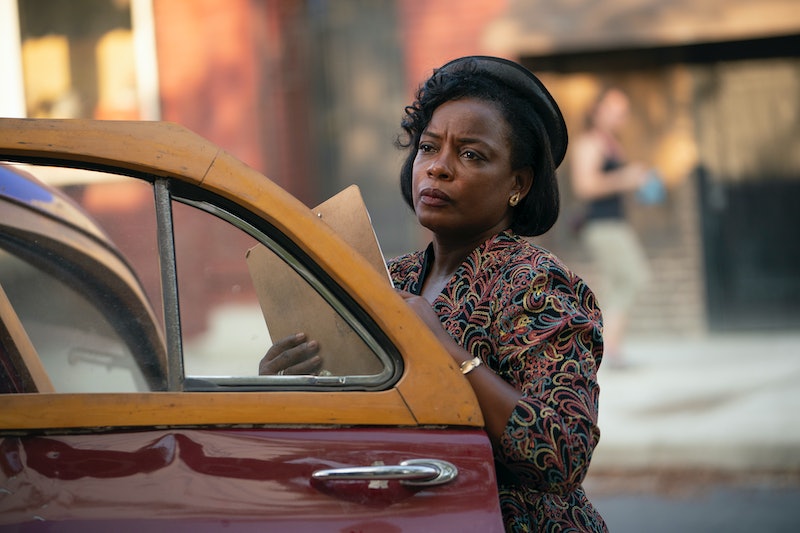 Spoilers ahead for Lovecraft Country Episode 7. For most of Lovecraft Country, Hippolyta has taken the backseat. Episode 1 hints that she's just as curious and capable as the rest of the characters, but she's benched early on when George tells her to stay home with their daughter Dee instead of making the fated trip to Ardham. We later learn that Hippolyta is brilliant, having discovered a star but given no credit as a Black woman. Her entire life has been full of silenced contributions and deferred dreams, and yet she's borne those indignities graciously. That is, until George is killed and she finally starts to unbottle her anger in Episode 7.

Hippolyta knows that Tic and Montrose are lying about George's death, and their suspicious actions after the museum trip set her off. She finds George's map of Devon County and drives to the ruins of Ardham Lodge, where she finds a singed piece of Diana’s travel comic. This proves to her that George was there — not shot by a sheriff like Tic told her.

Furious, Hippolyta becomes obsessed with unlocking the orrery she found in Leti's house, possibly hoping it will bring George back. After hacking the mathematical equations, the orrery reveals a key and the location of a telescope in Mayfield. Hippolyta figures out how to turn the telescope on, but before she can set the proper coordinates, cops burst in and Hippolyta is thrown into a literal space rift.

It’s here that the episode gets truly weird. Hippolyta wakes up on a futuristic planet, now with the ability to teleport herself wherever she wants: 1930s Paris, 1800s Africa, and back in bed with George, moments before he left for Ardham. A robotic looking woman explains that she hasn't imprisoned Hippolyta; in fact, Hippolyta is freer than she's ever been. She simply needs to "name herself" to become the person she always dreamt of being.

This leads Hippolyta through a very personal and interior journey that amounts to what is essentially an intergalactic therapy session. It's through her time dancing the Charleston with Josephine Baker and slaying colonizers in Tanzania that Hippolyta is able to admit the truth: as a Black woman in 1950s America, her life is small, and she's pissed about it. Without quite realizing it, she had molded herself into the perfect stereotype: an obedient and deferential housewife who rarely objected to being trampled on.

"Now that I'm tasting it — freedom — I see what I was robbed of back then," Hippolyta tells Josephine one night. "All those years I thought I had everything I ever wanted, only to discover I was the exact kind of Negro woman white folks wanted me to be." She then admits that sometimes she wants to kill white folks. "And it's not just them. I hate me for letting them make me feel small," she explains.

Hippolyta next transports herself to an all-women warrior tribe in Africa, and she's taught how to be a woman who doesn't cook, clean, or raise children for men. It's through these fantasies that we learn who Hippolyta wishes she could have been: a risqué, sexually free dancer; a violent warrior who delights in her "unladylike" rage; an adventurer who can travel to new lands without fear.

Ultimately though, it's Hippolyta's most realistic fantasy that's most illuminating. George's death has fueled her journey throughout Lovecraft Country, but being back in bed with him forces her to finally confront how trapped she felt by him, too. She finally addresses what Betty Freidan once called "the problem that has no name" in the Feminine Mystique. "I think now I can name this thing that's been eating at me so quietly," she tells George. "I was so angry because for so much of my life, I've been shrinking. I thought you knew how big I wanted to be, but you just stood by and let me shrink myself more for you."

It's the first time Hippolyta admits that maybe she never wanted to have kids or be a housewife confined to the home. This George may very well be a figment of her imagination, but he affirms that she's right. He "helped her shrink" so he could have a family and go out on the road knowing she was waiting at home.

George's admission frees something in Hippolyta and she ends the episode truly in possession of herself. Finally, she seems to accept that George is gone. But rather than let that tragedy define her future, she realizes she can live for Dee — and of course, there's always time for evolving into who she really wants to be. George echoes the audience sentiment when he tells her, "I see you now, Hippolyta. And I want you to be as big as you want to be."